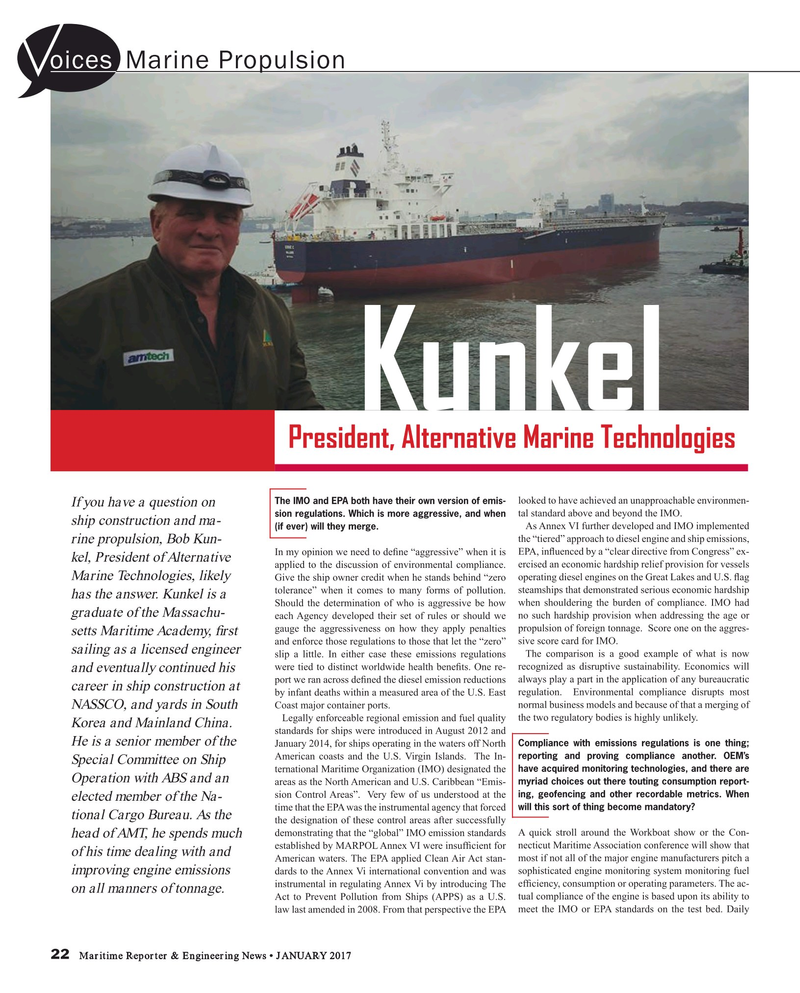 The IMO and EPA both have their own version of emis-

If you have a question on tal standard above and beyond the IMO. sion regulations. Which is more aggressive, and when ship construction and ma-

As Annex VI further developed and IMO implemented (if ever) will they merge.

In my opinion we need to de? ne “aggressive” when it is EPA, in? uenced by a “clear directive from Congress” ex- kel, President of Alternative applied to the discussion of environmental compliance. ercised an economic hardship relief provision for vessels

Give the ship owner credit when he stands behind “zero operating diesel engines on the Great Lakes and U.S. ? ag tolerance” when it comes to many forms of pollution. steamships that demonstrated serious economic hardship has the answer. Kunkel is a

Should the determination of who is aggressive be how when shouldering the burden of compliance. IMO had graduate of the Massachu- each Agency developed their set of rules or should we no such hardship provision when addressing the age or gauge the aggressiveness on how they apply penalties propulsion of foreign tonnage. Score one on the aggres- setts Maritime Academy, ? rst and enforce those regulations to those that let the “zero” sive score card for IMO.

sailing as a licensed engineer slip a little. In either case these emissions regulations The comparison is a good example of what is now were tied to distinct worldwide health bene? ts. One re- recognized as disruptive sustainability. Economics will and eventually continued his port we ran across de? ned the diesel emission reductions always play a part in the application of any bureaucratic career in ship construction at by infant deaths within a measured area of the U.S. East regulation. Environmental compliance disrupts most

Coast major container ports. normal business models and because of that a merging of

NASSCO, and yards in South

Korea and Mainland China. standards for ships were introduced in August 2012 and

He is a senior member of the

Compliance with emissions regulations is one thing;

January 2014, for ships operating in the waters off North reporting and proving compliance another. OEM’s

American coasts and the U.S. Virgin Islands. The In-

Special Committee on Ship have acquired monitoring technologies, and there are ternational Maritime Organization (IMO) designated the

Operation with ABS and an myriad choices out there touting consumption report- areas as the North American and U.S. Caribbean “Emis- ing, geofencing and other recordable metrics. When sion Control Areas”. Very few of us understood at the elected member of the Na- will this sort of thing become mandatory?

time that the EPA was the instrumental agency that forced tional Cargo Bureau. As the the designation of these control areas after successfully demonstrating that the “global” IMO emission standards A quick stroll around the Workboat show or the Con- head of AMT, he spends much established by MARPOL Annex VI were insuf? cient for necticut Maritime Association conference will show that of his time dealing with and

American waters. The EPA applied Clean Air Act stan- most if not all of the major engine manufacturers pitch a improving engine emissions dards to the Annex Vi international convention and was sophisticated engine monitoring system monitoring fuel instrumental in regulating Annex Vi by introducing The ef? ciency, consumption or operating parameters. The ac- on all manners of tonnage.

Act to Prevent Pollution from Ships (APPS) as a U.S. tual compliance of the engine is based upon its ability to law last amended in 2008. From that perspective the EPA meet the IMO or EPA standards on the test bed. Daily 22 Maritime Reporter & Engineering News • JANUARY 2017