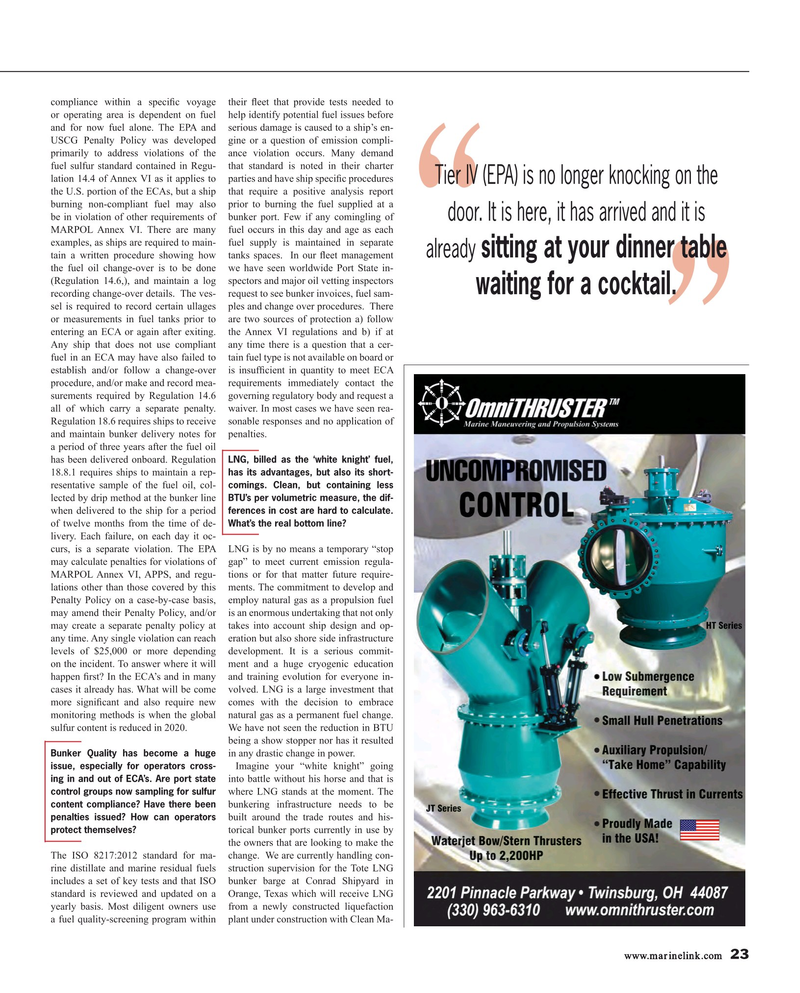 compliance within a speci? c voyage their ? eet that provide tests needed to or operating area is dependent on fuel help identify potential fuel issues before and for now fuel alone. The EPA and serious damage is caused to a ship’s en-

USCG Penalty Policy was developed gine or a question of emission compli- primarily to address violations of the ance violation occurs. Many demand fuel sulfur standard contained in Regu- that standard is noted in their charter lation 14.4 of Annex VI as it applies to parties and have ship speci? c procedures

Tier IV (EPA) is no longer knocking on the the U.S. portion of the ECAs, but a ship that require a positive analysis report burning non-compliant fuel may also prior to burning the fuel supplied at a be in violation of other requirements of bunker port. Few if any comingling of door. It is here, it has arrived and it is

MARPOL Annex VI. There are many fuel occurs in this day and age as each examples, as ships are required to main- fuel supply is maintained in separate sitting at your dinner table already tain a written procedure showing how tanks spaces. In our ? eet management the fuel oil change-over is to be done we have seen worldwide Port State in- “ (Regulation 14.6,), and maintain a log spectors and major oil vetting inspectors waiting for a cocktail.

recording change-over details. The ves- request to see bunker invoices, fuel sam- sel is required to record certain ullages ples and change over procedures. There or measurements in fuel tanks prior to are two sources of protection a) follow entering an ECA or again after exiting. the Annex VI regulations and b) if at

Any ship that does not use compliant any time there is a question that a cer- fuel in an ECA may have also failed to tain fuel type is not available on board or establish and/or follow a change-over is insuf? cient in quantity to meet ECA procedure, and/or make and record mea- requirements immediately contact the ” surements required by Regulation 14.6 governing regulatory body and request a all of which carry a separate penalty. waiver. In most cases we have seen rea-

Regulation 18.6 requires ships to receive sonable responses and no application of and maintain bunker delivery notes for penalties. a period of three years after the fuel oil has been delivered onboard. Regulation LNG, billed as the ‘white knight’ fuel, 18.8.1 requires ships to maintain a rep- has its advantages, but also its short- resentative sample of the fuel oil, col- comings. Clean, but containing less lected by drip method at the bunker line

BTU’s per volumetric measure, the dif- when delivered to the ship for a period ferences in cost are hard to calculate. of twelve months from the time of de-

livery. Each failure, on each day it oc- curs, is a separate violation. The EPA LNG is by no means a temporary “stop may calculate penalties for violations of gap” to meet current emission regula-

MARPOL Annex VI, APPS, and regu- tions or for that matter future require- lations other than those covered by this ments. The commitment to develop and

Penalty Policy on a case-by-case basis, employ natural gas as a propulsion fuel may amend their Penalty Policy, and/or is an enormous undertaking that not only may create a separate penalty policy at takes into account ship design and op- any time. Any single violation can reach eration but also shore side infrastructure levels of $25,000 or more depending development. It is a serious commit- on the incident. To answer where it will ment and a huge cryogenic education happen ? rst? In the ECA’s and in many and training evolution for everyone in- cases it already has. What will be come volved. LNG is a large investment that more signi? cant and also require new comes with the decision to embrace monitoring methods is when the global natural gas as a permanent fuel change. sulfur content is reduced in 2020. We have not seen the reduction in BTU being a show stopper nor has it resulted in any drastic change in power.

Bunker Quality has become a huge

Imagine your “white knight” going issue, especially for operators cross- into battle without his horse and that is ing in and out of ECA’s. Are port state where LNG stands at the moment. The control groups now sampling for sulfur bunkering infrastructure needs to be content compliance? Have there been built around the trade routes and his- penalties issued? How can operators torical bunker ports currently in use by protect themselves?

the owners that are looking to make the

The ISO 8217:2012 standard for ma- change. We are currently handling con- rine distillate and marine residual fuels struction supervision for the Tote LNG includes a set of key tests and that ISO bunker barge at Conrad Shipyard in standard is reviewed and updated on a Orange, Texas which will receive LNG yearly basis. Most diligent owners use from a newly constructed liquefaction a fuel quality-screening program within plant under construction with Clean Ma- www.marinelink.com 23