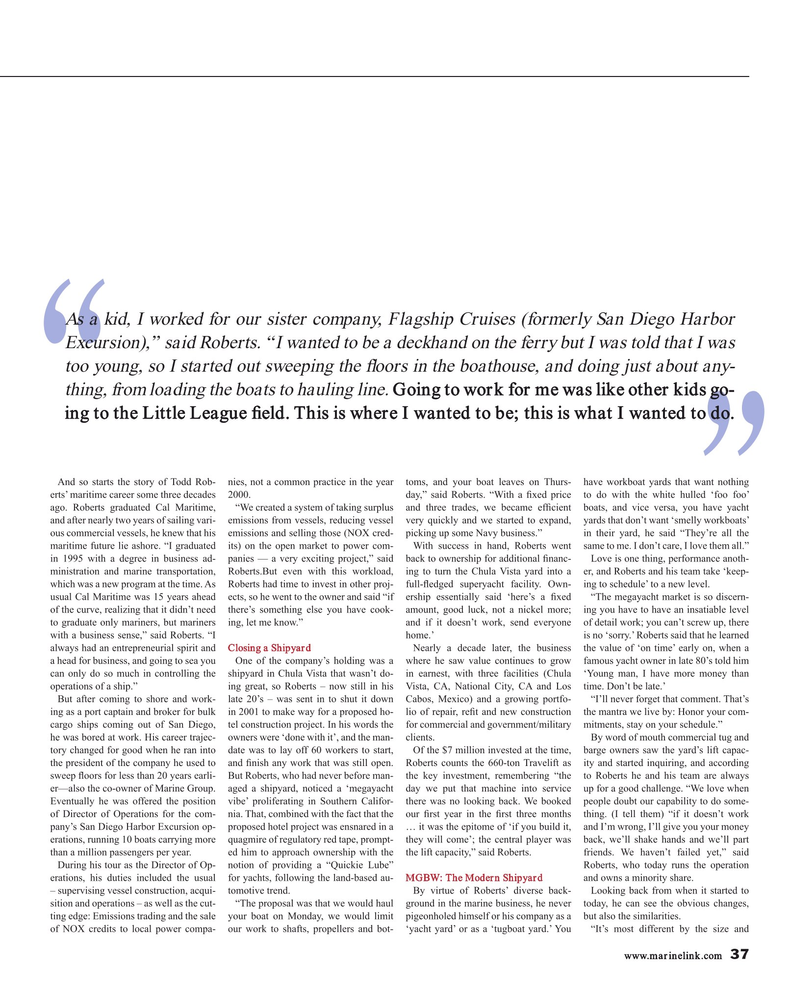 As a kid, I worked for our sister company, Flagship Cruises (formerly San Diego Harbor

Excursion),” said Roberts. “I wanted to be a deckhand on the ferry but I was told that I was too young, so I started out sweeping the ? oors in the boathouse, and doing just about any- thing, from loading the boats to hauling line. Going to work for me was like other kids go- ing to the Little League ? eld. This is where I wanted to be; this is what I wanted to do.

And so starts the story of Todd Rob- nies, not a common practice in the year toms, and your boat leaves on Thurs- have workboat yards that want nothing erts’ maritime career some three decades 2000. day,” said Roberts. “With a ? xed price to do with the white hulled ‘foo foo’ ago. Roberts graduated Cal Maritime, “We created a system of taking surplus and three trades, we became ef? cient boats, and vice versa, you have yacht and after nearly two years of sailing vari- emissions from vessels, reducing vessel very quickly and we started to expand, yards that don’t want ‘smelly workboats’ ous commercial vessels, he knew that his emissions and selling those (NOX cred- picking up some Navy business.” in their yard, he said “They’re all the ” maritime future lie ashore. “I graduated its) on the open market to power com- With success in hand, Roberts went same to me. I don’t care, I love them all.” in 1995 with a degree in business ad- panies — a very exciting project,” said back to ownership for additional ? nanc- Love is one thing, performance anoth- ministration and marine transportation, Roberts.But even with this workload, ing to turn the Chula Vista yard into a er, and Roberts and his team take ‘keep- which was a new program at the time. As Roberts had time to invest in other proj- full-? edged superyacht facility. Own- ing to schedule’ to a new level.

usual Cal Maritime was 15 years ahead ects, so he went to the owner and said “if ership essentially said ‘here’s a ? xed “The megayacht market is so discern- of the curve, realizing that it didn’t need there’s something else you have cook- amount, good luck, not a nickel more; ing you have to have an insatiable level to graduate only mariners, but mariners ing, let me know.” and if it doesn’t work, send everyone of detail work; you can’t screw up, there with a business sense,” said Roberts. “I home.’ is no ‘sorry.’ Roberts said that he learned always had an entrepreneurial spirit and Closing a Shipyard Nearly a decade later, the business the value of ‘on time’ early on, when a a head for business, and going to sea you One of the company’s holding was a where he saw value continues to grow famous yacht owner in late 80’s told him can only do so much in controlling the shipyard in Chula Vista that wasn’t do- in earnest, with three facilities (Chula ‘Young man, I have more money than operations of a ship.” ing great, so Roberts – now still in his Vista, CA, National City, CA and Los time. Don’t be late.’

But after coming to shore and work- late 20’s – was sent in to shut it down Cabos, Mexico) and a growing portfo- “I’ll never forget that comment. That’s ing as a port captain and broker for bulk in 2001 to make way for a proposed ho- lio of repair, re? t and new construction the mantra we live by: Honor your com- cargo ships coming out of San Diego, tel construction project. In his words the for commercial and government/military mitments, stay on your schedule.” he was bored at work. His career trajec- owners were ‘done with it’, and the man- clients. By word of mouth commercial tug and tory changed for good when he ran into date was to lay off 60 workers to start, Of the $7 million invested at the time, barge owners saw the yard’s lift capac- the president of the company he used to and ? nish any work that was still open. Roberts counts the 660-ton Travelift as ity and started inquiring, and according sweep ? oors for less than 20 years earli- But Roberts, who had never before man- the key investment, remembering “the to Roberts he and his team are always er—also the co-owner of Marine Group. aged a shipyard, noticed a ‘megayacht day we put that machine into service up for a good challenge. “We love when

Eventually he was offered the position vibe’ proliferating in Southern Califor- there was no looking back. We booked people doubt our capability to do some- of Director of Operations for the com- nia. That, combined with the fact that the our ? rst year in the ? rst three months thing. (I tell them) “if it doesn’t work pany’s San Diego Harbor Excursion op- proposed hotel project was ensnared in a … it was the epitome of ‘if you build it, and I’m wrong, I’ll give you your money erations, running 10 boats carrying more quagmire of regulatory red tape, prompt- they will come’; the central player was back, we’ll shake hands and we’ll part than a million passengers per year. ed him to approach ownership with the the lift capacity,” said Roberts. friends. We haven’t failed yet,” said

During his tour as the Director of Op- notion of providing a “Quickie Lube” Roberts, who today runs the operation erations, his duties included the usual for yachts, following the land-based au- MGBW: The Modern Shipyard and owns a minority share.

– supervising vessel construction, acqui- tomotive trend. By virtue of Roberts’ diverse back- Looking back from when it started to sition and operations – as well as the cut- “The proposal was that we would haul ground in the marine business, he never today, he can see the obvious changes, ting edge: Emissions trading and the sale your boat on Monday, we would limit pigeonholed himself or his company as a but also the similarities. of NOX credits to local power compa- our work to shafts, propellers and bot- ‘yacht yard’ or as a ‘tugboat yard.’ You “It’s most different by the size and www.marinelink.com 37