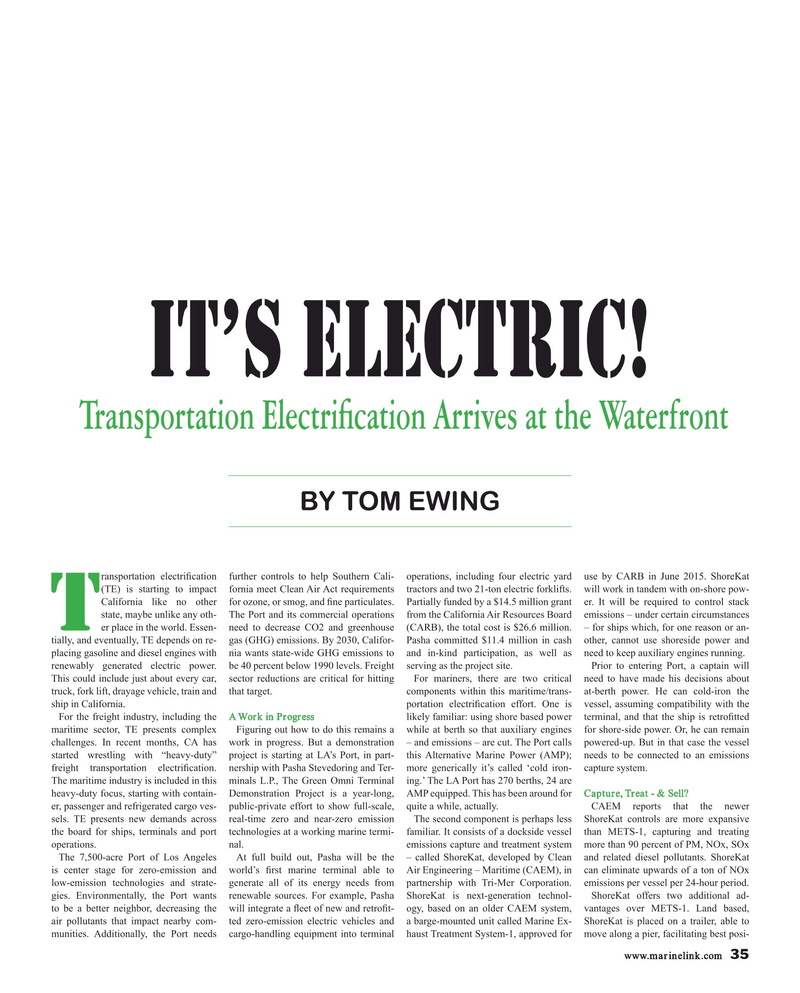 California like no other for ozone, or smog, and ? ne particulates. Partially funded by a $14.5 million grant er. It will be required to control stack state, maybe unlike any oth- The Port and its commercial operations from the California Air Resources Board emissions – under certain circumstances t er place in the world. Essen- need to decrease CO2 and greenhouse (CARB), the total cost is $26.6 million. – for ships which, for one reason or an- tially, and eventually, TE depends on re- gas (GHG) emissions. By 2030, Califor- Pasha committed $11.4 million in cash other, cannot use shoreside power and placing gasoline and diesel engines with nia wants state-wide GHG emissions to and in-kind participation, as well as need to keep auxiliary engines running.

renewably generated electric power. be 40 percent below 1990 levels. Freight serving as the project site. Prior to entering Port, a captain will

This could include just about every car, sector reductions are critical for hitting For mariners, there are two critical need to have made his decisions about truck, fork lift, drayage vehicle, train and that target. components within this maritime/trans- at-berth power. He can cold-iron the ship in California. portation electri? cation effort. One is vessel, assuming compatibility with the

For the freight industry, including the A Work in Progress likely familiar: using shore based power terminal, and that the ship is retro? tted maritime sector, TE presents complex Figuring out how to do this remains a while at berth so that auxiliary engines for shore-side power. Or, he can remain challenges. In recent months, CA has work in progress. But a demonstration – and emissions – are cut. The Port calls powered-up. But in that case the vessel started wrestling with “heavy-duty” project is starting at LA’s Port, in part- this Alternative Marine Power (AMP); needs to be connected to an emissions freight transportation electri? cation. nership with Pasha Stevedoring and Ter- more generically it’s called ‘cold iron- capture system.

The maritime industry is included in this minals L.P., The Green Omni Terminal ing.’ The LA Port has 270 berths, 24 are heavy-duty focus, starting with contain- Demonstration Project is a year-long, AMP equipped. This has been around for Capture, Treat - & Sell?

er, passenger and refrigerated cargo ves- public-private effort to show full-scale, quite a while, actually. CAEM reports that the newer sels. TE presents new demands across real-time zero and near-zero emission The second component is perhaps less ShoreKat controls are more expansive the board for ships, terminals and port technologies at a working marine termi- familiar. It consists of a dockside vessel than METS-1, capturing and treating operations. nal. emissions capture and treatment system more than 90 percent of PM, NOx, SOx

The 7,500-acre Port of Los Angeles At full build out, Pasha will be the – called ShoreKat, developed by Clean and related diesel pollutants. ShoreKat is center stage for zero-emission and world’s ? rst marine terminal able to Air Engineering – Maritime (CAEM), in can eliminate upwards of a ton of NOx low-emission technologies and strate- generate all of its energy needs from partnership with Tri-Mer Corporation. emissions per vessel per 24-hour period.

gies. Environmentally, the Port wants renewable sources. For example, Pasha ShoreKat is next-generation technol- ShoreKat offers two additional ad- to be a better neighbor, decreasing the will integrate a ? eet of new and retro? t- ogy, based on an older CAEM system, vantages over METS-1. Land based, air pollutants that impact nearby com- ted zero-emission electric vehicles and a barge-mounted unit called Marine Ex- ShoreKat is placed on a trailer, able to munities. Additionally, the Port needs cargo-handling equipment into terminal haust Treatment System-1, approved for move along a pier, facilitating best posi- www.marinelink.com 35