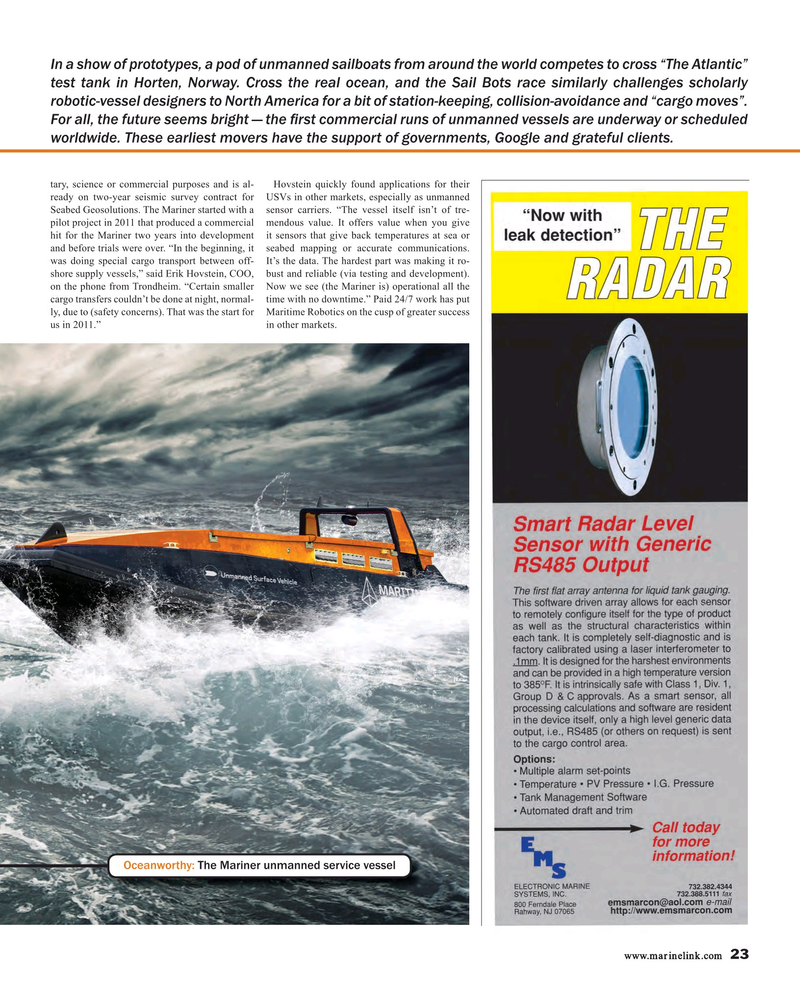 In a show of prototypes, a pod of unmanned sailboats from around the world competes to cross “The Atlantic” test tank in Horten, Norway. Cross the real ocean, and the Sail Bots race similarly challenges scholarly robotic-vessel designers to North America for a bit of station-keeping, collision-avoidance and “cargo moves”.

For all, the future seems bright — the ? rst commercial runs of unmanned vessels are underway or scheduled worldwide. These earliest movers have the support of governments, Google and grateful clients.

tary, science or commercial purposes and is al- Hovstein quickly found applications for their ready on two-year seismic survey contract for USVs in other markets, especially as unmanned

Seabed Geosolutions. The Mariner started with a sensor carriers. “The vessel itself isn’t of tre- pilot project in 2011 that produced a commercial mendous value. It offers value when you give hit for the Mariner two years into development it sensors that give back temperatures at sea or and before trials were over. “In the beginning, it seabed mapping or accurate communications. was doing special cargo transport between off- It’s the data. The hardest part was making it ro- shore supply vessels,” said Erik Hovstein, COO, bust and reliable (via testing and development). on the phone from Trondheim. “Certain smaller Now we see (the Mariner is) operational all the cargo transfers couldn’t be done at night, normal- time with no downtime.” Paid 24/7 work has put ly, due to (safety concerns). That was the start for Maritime Robotics on the cusp of greater success us in 2011.” in other markets.