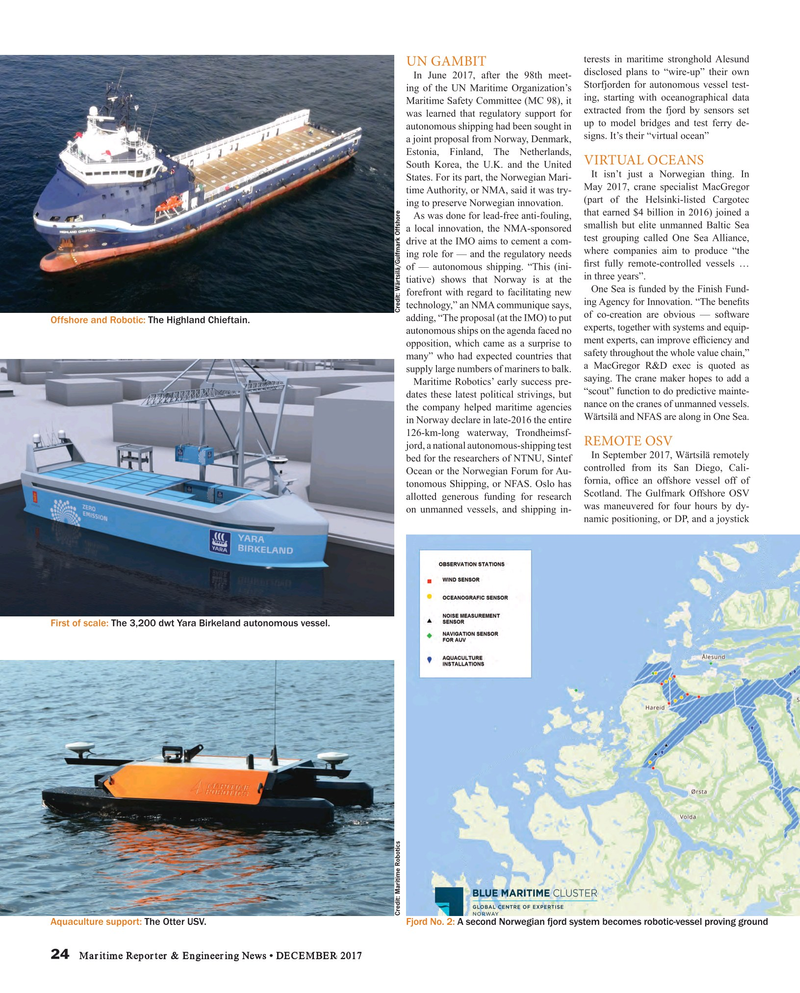 UN GAMBIT disclosed plans to “wire-up” their own

In June 2017, after the 98th meet- ing of the UN Maritime Organization’s Storfjorden for autonomous vessel test-

Maritime Safety Committee (MC 98), it ing, starting with oceanographical data was learned that regulatory support for extracted from the fjord by sensors set up to model bridges and test ferry de- autonomous shipping had been sought in signs. It’s their “virtual ocean” a joint proposal from Norway, Denmark,

South Korea, the U.K. and the United

It isn’t just a Norwegian thing. In

States. For its part, the Norwegian Mari-

May 2017, crane specialist MacGregor time Authority, or NMA, said it was try- (part of the Helsinki-listed Cargotec ing to preserve Norwegian innovation.

As was done for lead-free anti-fouling, that earned $4 billion in 2016) joined a a local innovation, the NMA-sponsored smallish but elite unmanned Baltic Sea test grouping called One Sea Alliance, drive at the IMO aims to cement a com- ing role for — and the regulatory needs where companies aim to produce “the ? rst fully remote-controlled vessels … of — autonomous shipping. “This (ini- tiative) shows that Norway is at the in three years”.

One Sea is funded by the Finish Fund- forefront with regard to facilitating new ing Agency for Innovation. “The bene? ts technology,” an NMA communique says, of co-creation are obvious — software adding, “The proposal (at the IMO) to put

Offshore and Robotic: The Highland Chieftain.

experts, together with systems and equip- autonomous ships on the agenda faced no opposition, which came as a surprise to ment experts, can improve ef? ciency and many” who had expected countries that safety throughout the whole value chain,” a MacGregor R&D exec is quoted as supply large numbers of mariners to balk. saying. The crane maker hopes to add a

Wärtsilä and NFAS are along in One Sea. in Norway declare in late-2016 the entire 126-km-long waterway, Trondheimsf-

In September 2017, Wärtsilä remotely bed for the researchers of NTNU, Sintef controlled from its San Diego, Cali-

Ocean or the Norwegian Forum for Au- tonomous Shipping, or NFAS. Oslo has fornia, of? ce an offshore vessel off of allotted generous funding for research Scotland. The Gulfmark Offshore OSV was maneuvered for four hours by dy- on unmanned vessels, and shipping in- namic positioning, or DP, and a joystick