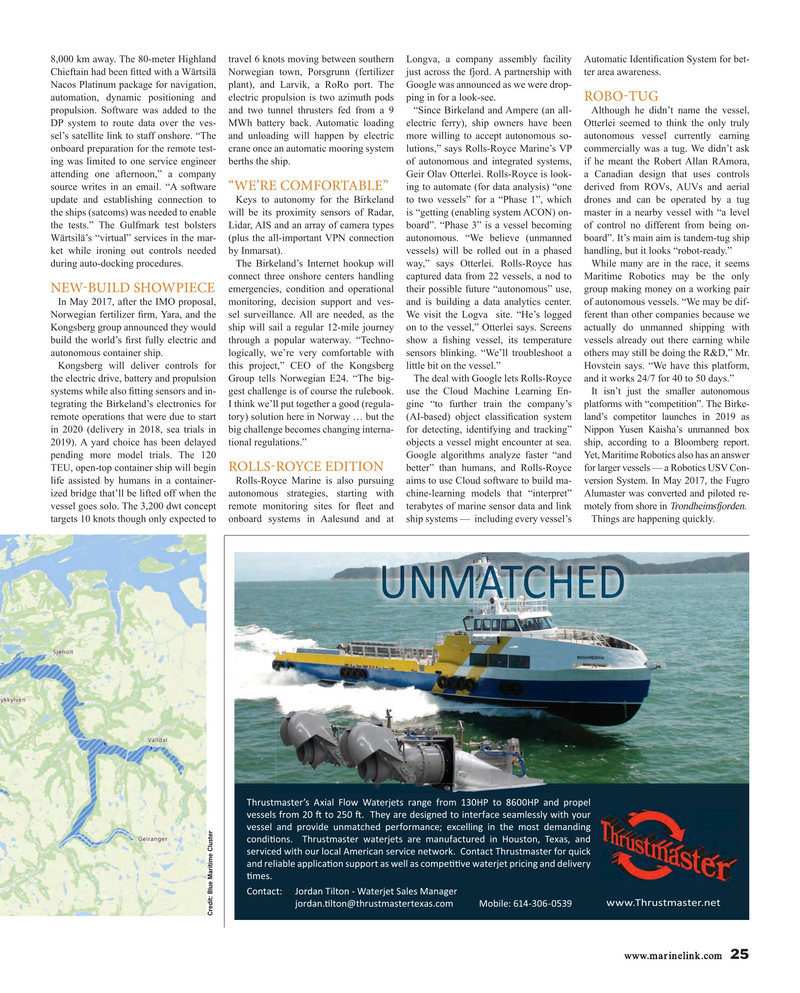 Chieftain had been ? tted with a Wärtsilä Norwegian town, Porsgrunn (fertilizer just across the fjord. A partnership with ter area awareness.

Nacos Platinum package for navigation, plant), and Larvik, a RoRo port. The Google was announced as we were drop-

ROBO-TUG automation, dynamic positioning and electric propulsion is two azimuth pods ping in for a look-see. propulsion. Software was added to the and two tunnel thrusters fed from a 9 “Since Birkeland and Ampere (an all- Although he didn’t name the vessel,

DP system to route data over the ves- MWh battery back. Automatic loading electric ferry), ship owners have been Otterlei seemed to think the only truly sel’s satellite link to staff onshore. “The and unloading will happen by electric more willing to accept autonomous so- autonomous vessel currently earning onboard preparation for the remote test- crane once an automatic mooring system lutions,” says Rolls-Royce Marine’s VP commercially was a tug. We didn’t ask ing was limited to one service engineer berths the ship. of autonomous and integrated systems, if he meant the Robert Allan RAmora, attending one afternoon,” a company Geir Olav Otterlei. Rolls-Royce is look- a Canadian design that uses controls source writes in an email. “A software ing to automate (for data analysis) “one derived from ROVs, AUVs and aerial “WE’RE COMFORTABLE” update and establishing connection to Keys to autonomy for the Birkeland to two vessels” for a “Phase 1”, which drones and can be operated by a tug the ships (satcoms) was needed to enable will be its proximity sensors of Radar, is “getting (enabling system ACON) on- master in a nearby vessel with “a level the tests.” The Gulfmark test bolsters Lidar, AIS and an array of camera types board”. “Phase 3” is a vessel becoming of control no different from being on-

Wärtsilä’s “virtual” services in the mar- (plus the all-important VPN connection autonomous. “We believe (unmanned board”. It’s main aim is tandem-tug ship ket while ironing out controls needed by Inmarsat). vessels) will be rolled out in a phased handling, but it looks “robot-ready.” during auto-docking procedures. The Birkeland’s Internet hookup will way,” says Otterlei. Rolls-Royce has While many are in the race, it seems connect three onshore centers handling captured data from 22 vessels, a nod to Maritime Robotics may be the only

In May 2017, after the IMO proposal, monitoring, decision support and ves- and is building a data analytics center. of autonomous vessels. “We may be dif-

Norwegian fertilizer ? rm, Yara, and the sel surveillance. All are needed, as the We visit the Logva site. “He’s logged ferent than other companies because we

Kongsberg group announced they would ship will sail a regular 12-mile journey on to the vessel,” Otterlei says. Screens actually do unmanned shipping with build the world’s ? rst fully electric and through a popular waterway. “Techno- show a ? shing vessel, its temperature vessels already out there earning while autonomous container ship. logically, we’re very comfortable with sensors blinking. “We’ll troubleshoot a others may still be doing the R&D,” Mr.

Kongsberg will deliver controls for this project,” CEO of the Kongsberg little bit on the vessel.” Hovstein says. “We have this platform, the electric drive, battery and propulsion Group tells Norwegian E24. “The big- The deal with Google lets Rolls-Royce and it works 24/7 for 40 to 50 days.” systems while also ? tting sensors and in- gest challenge is of course the rulebook. use the Cloud Machine Learning En- It isn’t just the smaller autonomous tegrating the Birkeland’s electronics for I think we’ll put together a good (regula- gine “to further train the company’s platforms with “competition”. The Birke- remote operations that were due to start tory) solution here in Norway … but the (AI-based) object classi? cation system land’s competitor launches in 2019 as in 2020 (delivery in 2018, sea trials in big challenge becomes changing interna- for detecting, identifying and tracking” Nippon Yusen Kaisha’s unmanned box 2019). A yard choice has been delayed tional regulations.” objects a vessel might encounter at sea. ship, according to a Bloomberg report. pending more model trials. The 120 Google algorithms analyze faster “and Yet, Maritime Robotics also has an answer

TEU, open-top container ship will begin better” than humans, and Rolls-Royce for larger vessels — a Robotics USV Con- life assisted by humans in a container- Rolls-Royce Marine is also pursuing aims to use Cloud software to build ma- version System. In May 2017, the Fugro ized bridge that’ll be lifted off when the autonomous strategies, starting with chine-learning models that “interpret” Alumaster was converted and piloted re- vessel goes solo. The 3,200 dwt concept remote monitoring sites for ? eet and terabytes of marine sensor data and link motely from shore in Trondheimsfjorden. targets 10 knots though only expected to onboard systems in Aalesund and at ship systems — including every vessel’s Things are happening quickly.