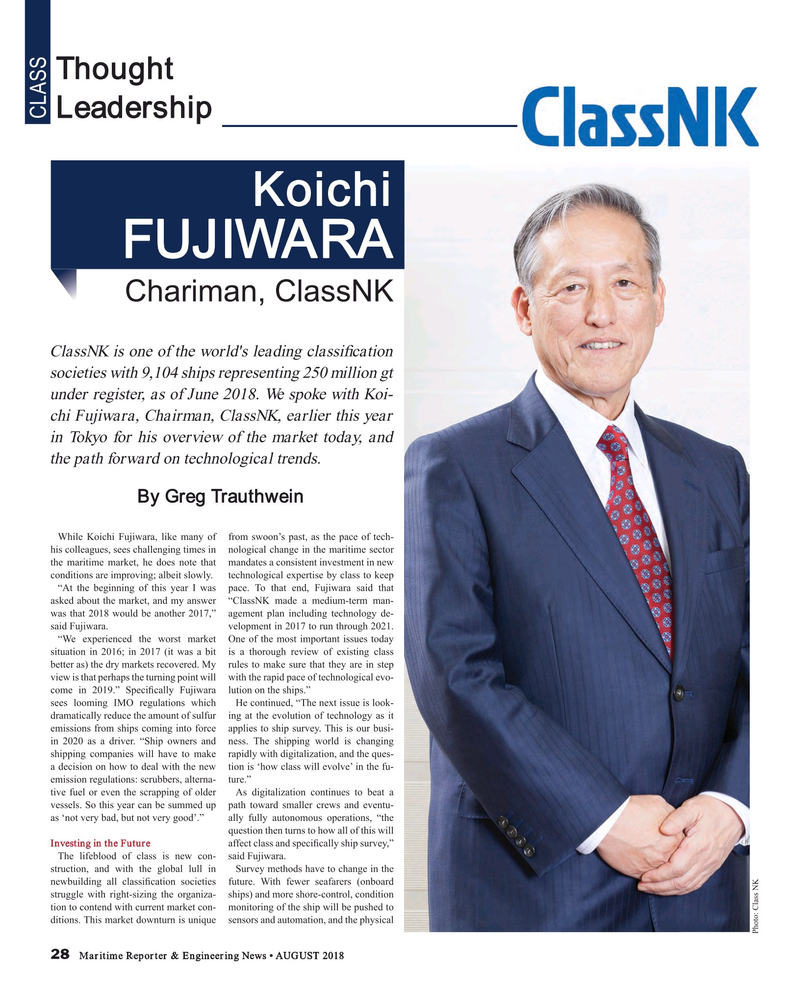 ClassNK is one of the world's leading classi? cation societies with 9,104 ships representing 250 million gt under register, as of June 2018. We spoke with Koi- chi Fujiwara, Chairman, ClassNK, earlier this year in Tokyo for his overview of the market today, and the path forward on technological trends.

While Koichi Fujiwara, like many of from swoon’s past, as the pace of tech- his colleagues, sees challenging times in nological change in the maritime sector the maritime market, he does note that mandates a consistent investment in new conditions are improving; albeit slowly. technological expertise by class to keep “At the beginning of this year I was pace. To that end, Fujiwara said that asked about the market, and my answer “ClassNK made a medium-term man- was that 2018 would be another 2017,” agement plan including technology de- said Fujiwara. velopment in 2017 to run through 2021. “We experienced the worst market One of the most important issues today situation in 2016; in 2017 (it was a bit is a thorough review of existing class better as) the dry markets recovered. My rules to make sure that they are in step view is that perhaps the turning point will with the rapid pace of technological evo- come in 2019.” Speci? cally Fujiwara lution on the ships.” sees looming IMO regulations which He continued, “The next issue is look- dramatically reduce the amount of sulfur ing at the evolution of technology as it emissions from ships coming into force applies to ship survey. This is our busi- in 2020 as a driver. “Ship owners and ness. The shipping world is changing shipping companies will have to make rapidly with digitalization, and the ques- a decision on how to deal with the new tion is ‘how class will evolve’ in the fu- emission regulations: scrubbers, alterna- ture.” tive fuel or even the scrapping of older As digitalization continues to beat a vessels. So this year can be summed up path toward smaller crews and eventu- as ‘not very bad, but not very good’.” ally fully autonomous operations, “the question then turns to how all of this will

The lifeblood of class is new con- said Fujiwara. struction, and with the global lull in Survey methods have to change in the newbuilding all classi? cation societies future. With fewer seafarers (onboard struggle with right-sizing the organiza- ships) and more shore-control, condition tion to contend with current market con- monitoring of the ship will be pushed to ditions. This market downturn is unique sensors and automation, and the physical