Thirty-six hours after Hurricane Maria hit Puerto Rico, the port of San Juan was back up and running, scanning the incoming relief cargo as it arrived. Now, nearly a year after the historic storm, San Juan remains one of the most secure and efficient ports in the world, scanning and adjudicating cargo shipments at an unprecedented speed, with wait times similar to pausing at a stop light. It was the first and only port in the Western Hemisphere to scan near-100 percent of incoming containerized cargo (bulk, un-containerized cargo is not scanned).  At the forefront of collecting integrated port security data and exponentially increasing the quantity of cargo scanned, the Port of San Juan has revolutionized port security.

Security operations are often considered to be a cause of backed-up cargo traffic at any port. The inevitable delay that comes with manual customs inspection along with screening for narcotics, weapons, radiological substances, and other banned goods, creates a bottleneck that disrupts the port’s operations. Regardless of the environment, pressures are mounting to move payload as quickly as possible through security screening while achieving cost efficiency. Yet increased volume, when combined with these pressures, leaves most ports successfully scanning less than 10 percent all incoming cargo.

The 2006 US Safe Port Act required 100 percent screening of all inbound US cargo containers. Moreover, the government of Puerto Rico desired, as an island, to effectively interdict the smuggling of guns, drugs and other contraband into Puerto Rico.  In response to the Safe Port Act and the desire to reduce the flow of contraband onto the island, Puerto Rico implemented a regulation allowing for up to 100 percent scanning by Non-Intrusive Inspection (imaging) systems at the Port of San Juan. The time had come for a massive overhaul of the port’s security system.
At the time of the Safe Port Act, the industry considered the rule an impossible feat; the Puerto Rico Ports Authority (PRPA), charged with port security, and the Hacienda, responsible for taxes and tariffs, were not prepared to scan 100% of the massive volume of goods passing through San Juan. The port is, after all, the busiest port in the Caribbean, with more than one million TEU’s (20-foot equivalent) passing through its eight cargo terminals and 500,000 square feet in a given year. To get a program up and running quickly without crippling cargo traffic, the PRPA chose S2 Global to develop a soup-to-nuts scanning strategy with them that covered every step of the process from personnel to maintenance. Once operational, this fully integrated system scanned more containers in one month than had previously been scanned in an entire year.
By considering the specific needs of the port, S2 Global’s operation was able to seamlessly integrate its new scanning system into the Puerto Rico customs process. In order to streamline the scanning process, containers are scanned at the truck-deployment checkpoint, rather than being manually inspected as they are unloaded from a boat.  Before exiting the port, each truck drives through the Rapiscan Eagle M45, a flexible X-ray system that scans the contents of the container and truck axis in less than 60 seconds. This checkpoint’s X-ray bursts can reach through steel containers, producing an image with enough specificity to help an analyst verify the container’s contents.
The Port of San Juan was simultaneously pioneering the integration of logistics data and inspection images with adjudication and automated systems, such as access control. Logistics data arrives 24 hours ahead of the ship to the container reader and is matched up with the scan image at the checkpoint. Meanwhile, image analysts focus on adjudicating the contents to the manifest. The data is instantly shared with Puerto Rican law enforcement and compliance agencies. This centralized process allows for real-time discrepancy analysis, so that any anomalies can be flagged for additional inspection by authorities. The application of mobile scanning technology at the port, together with real-time data integration, minimizes interference with the flow of cargo traffic.

The turnkey operation developed true command and control in security operations that resulted in an even more efficiently managed process. The ultimate test of this management came in September of 2016, with the arrival of Hurricane Maria. As the hurricane wreaked havoc on the island, the port’s supply chain was handicapped by the infrastructure bottleneck. Without a functioning scanning system, the rapidly arriving relief could not be deployed without ignoring safety concerns.

Through the dedication and hard work of S2 staff, the port resumed operations at its checkpoints using generator power just 36 hours after the storm. With the fully integrated process back in place, S2 screened near-100 percent of the containerized cargo effectively and efficiently, and relief supplies reached the waiting people of Puerto Rico.

The security operations at the port of San Juan after Hurricane Maria show a breakthrough improvement in port security that has implications beyond times of crisis. The key is to emphasize the quality of data as much as the volume of goods moving through the security process. It is critical that analysts bring the big picture into sharper focus, pulling together relevant and valuable data from multiple sources to drive targeted security assessments. San Juan shows that such high-quality data can be collected and stored at rapid rates–five times faster than the industry average–and thus quality of scanning no longer comes at the cost of quantity of cargo scanned.

This reveals an important point about the future of port security: the synthesis of data generated by multiple sources and application-specific business rules provides an opportunity to automate manual processes and control specific flows. The availability of more granular information facilitates making crucial decisions, such as the most effective deployment of personnel and the appropriate use of automation. By accumulating information on one platform, data can be aggregated and analyzed, rather than checked once and forgotten. This approach supports enhanced collaboration, with data generated internally and from outside services creating an intelligence loop to share across teams and networks.
The Port of San Juan has become a case study in port security innovation. Every port, no matter how large or small, can implement near-100 percent of containerized cargo screening, time- and cost-efficiently, and all while accumulating valuable data on an integrated platform. As more ports follow suit in modernizing their approach to security, the result will be a more efficient and successful screening process shaped by decisions that are informed by integrated, rich data. 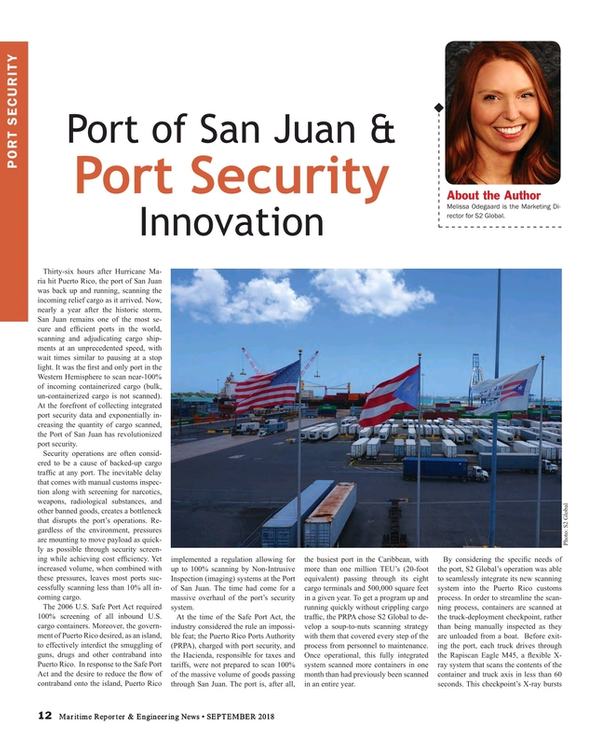