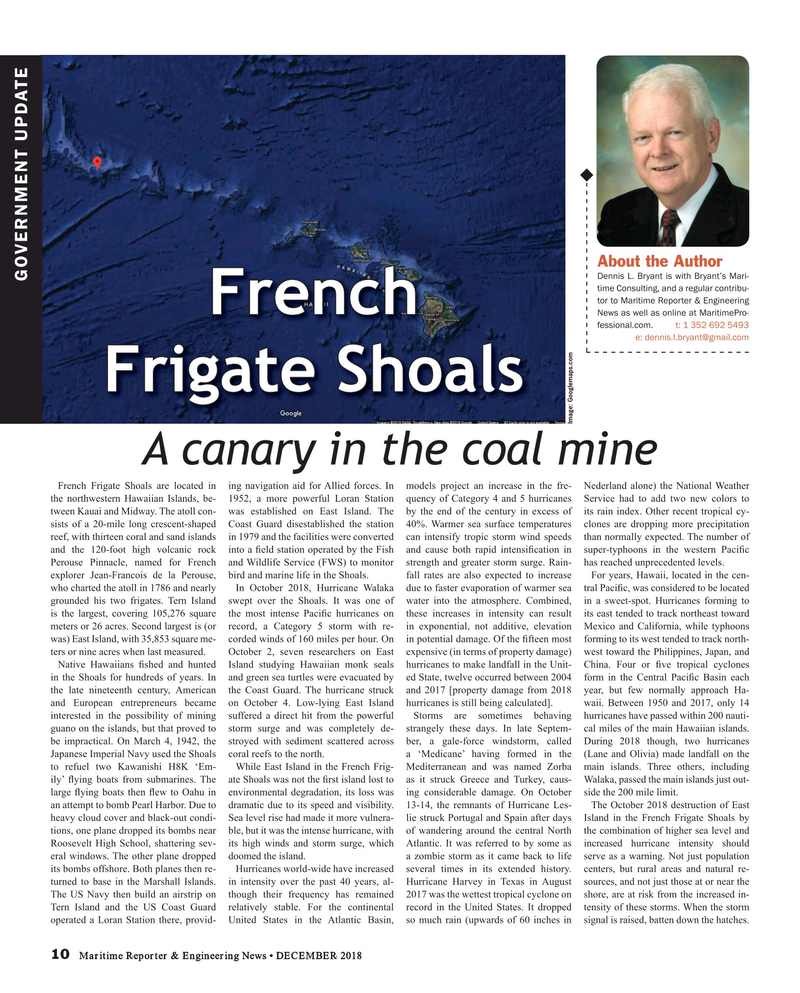 A canary in the coal mine

French Frigate Shoals are located in ing navigation aid for Allied forces. In models project an increase in the fre- Nederland alone) the National Weather the northwestern Hawaiian Islands, be- 1952, a more powerful Loran Station quency of Category 4 and 5 hurricanes Service had to add two new colors to tween Kauai and Midway. The atoll con- was established on East Island. The by the end of the century in excess of its rain index. Other recent tropical cy- sists of a 20-mile long crescent-shaped Coast Guard disestablished the station 40%. Warmer sea surface temperatures clones are dropping more precipitation reef, with thirteen coral and sand islands in 1979 and the facilities were converted can intensify tropic storm wind speeds than normally expected. The number of and the 120-foot high volcanic rock into a ? eld station operated by the Fish and cause both rapid intensi? cation in super-typhoons in the western Paci? c

Perouse Pinnacle, named for French and Wildlife Service (FWS) to monitor strength and greater storm surge. Rain- has reached unprecedented levels. explorer Jean-Francois de la Perouse, bird and marine life in the Shoals. fall rates are also expected to increase For years, Hawaii, located in the cen- who charted the atoll in 1786 and nearly In October 2018, Hurricane Walaka due to faster evaporation of warmer sea tral Paci? c, was considered to be located grounded his two frigates. Tern Island swept over the Shoals. It was one of water into the atmosphere. Combined, in a sweet-spot. Hurricanes forming to is the largest, covering 105,276 square the most intense Paci? c hurricanes on these increases in intensity can result its east tended to track northeast toward meters or 26 acres. Second largest is (or record, a Category 5 storm with re- in exponential, not additive, elevation Mexico and California, while typhoons was) East Island, with 35,853 square me- corded winds of 160 miles per hour. On in potential damage. Of the ? fteen most forming to its west tended to track north- ters or nine acres when last measured. October 2, seven researchers on East expensive (in terms of property damage) west toward the Philippines, Japan, and

Native Hawaiians ? shed and hunted Island studying Hawaiian monk seals hurricanes to make landfall in the Unit- China. Four or ? ve tropical cyclones in the Shoals for hundreds of years. In and green sea turtles were evacuated by ed State, twelve occurred between 2004 form in the Central Paci? c Basin each the late nineteenth century, American the Coast Guard. The hurricane struck and 2017 [property damage from 2018 year, but few normally approach Ha- and European entrepreneurs became on October 4. Low-lying East Island hurricanes is still being calculated]. waii. Between 1950 and 2017, only 14 interested in the possibility of mining suffered a direct hit from the powerful Storms are sometimes behaving hurricanes have passed within 200 nauti- guano on the islands, but that proved to storm surge and was completely de- strangely these days. In late Septem- cal miles of the main Hawaiian islands. be impractical. On March 4, 1942, the stroyed with sediment scattered across ber, a gale-force windstorm, called During 2018 though, two hurricanes

Japanese Imperial Navy used the Shoals coral reefs to the north. a ‘Medicane’ having formed in the (Lane and Olivia) made landfall on the to refuel two Kawanishi H8K ‘Em- While East Island in the French Frig- Mediterranean and was named Zorba main islands. Three others, including ily’ ? ying boats from submarines. The ate Shoals was not the ? rst island lost to as it struck Greece and Turkey, caus- Walaka, passed the main islands just out- large ? ying boats then ? ew to Oahu in environmental degradation, its loss was ing considerable damage. On October side the 200 mile limit. an attempt to bomb Pearl Harbor. Due to dramatic due to its speed and visibility. 13-14, the remnants of Hurricane Les- The October 2018 destruction of East heavy cloud cover and black-out condi- Sea level rise had made it more vulnera- lie struck Portugal and Spain after days Island in the French Frigate Shoals by tions, one plane dropped its bombs near ble, but it was the intense hurricane, with of wandering around the central North the combination of higher sea level and

Roosevelt High School, shattering sev- its high winds and storm surge, which Atlantic. It was referred to by some as increased hurricane intensity should eral windows. The other plane dropped doomed the island. a zombie storm as it came back to life serve as a warning. Not just population its bombs offshore. Both planes then re- Hurricanes world-wide have increased several times in its extended history. centers, but rural areas and natural re- turned to base in the Marshall Islands. in intensity over the past 40 years, al- Hurricane Harvey in Texas in August sources, and not just those at or near the

The US Navy then build an airstrip on though their frequency has remained 2017 was the wettest tropical cyclone on shore, are at risk from the increased in-

Tern Island and the US Coast Guard relatively stable. For the continental record in the United States. It dropped tensity of these storms. When the storm operated a Loran Station there, provid- United States in the Atlantic Basin, so much rain (upwards of 60 inches in signal is raised, batten down the hatches.