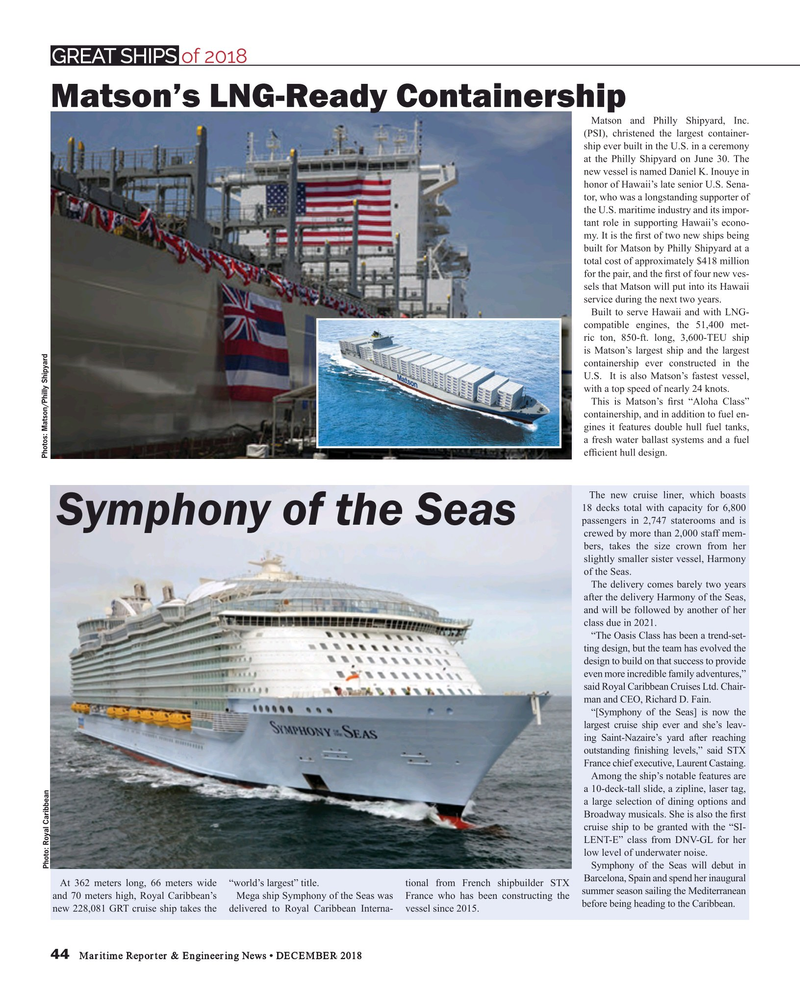 Matson and Philly Shipyard, Inc. (PSI), christened the largest container- ship ever built in the U.S. in a ceremony at the Philly Shipyard on June 30. The new vessel is named Daniel K. Inouye in honor of Hawaii’s late senior U.S. Sena- tor, who was a longstanding supporter of the U.S. maritime industry and its impor- tant role in supporting Hawaii’s econo- my. It is the ? rst of two new ships being built for Matson by Philly Shipyard at a total cost of approximately $418 million for the pair, and the ? rst of four new ves- sels that Matson will put into its Hawaii service during the next two years.

Built to serve Hawaii and with LNG- compatible engines, the 51,400 met- ric ton, 850-ft. long, 3,600-TEU ship is Matson’s largest ship and the largest containership ever constructed in the

U.S. It is also Matson’s fastest vessel, with a top speed of nearly 24 knots.

The new cruise liner, which boasts 18 decks total with capacity for 6,800 passengers in 2,747 staterooms and is

Symphony of the Seas crewed by more than 2,000 staff mem- bers, takes the size crown from her slightly smaller sister vessel, Harmony of the Seas.

The delivery comes barely two years after the delivery Harmony of the Seas, and will be followed by another of her class due in 2021.

“The Oasis Class has been a trend-set- ting design, but the team has evolved the design to build on that success to provide even more incredible family adventures,” said Royal Caribbean Cruises Ltd. Chair- man and CEO, Richard D. Fain.

Among the ship’s notable features are a 10-deck-tall slide, a zipline, laser tag, a large selection of dining options and

Broadway musicals. She is also the ? rst cruise ship to be granted with the “SI-

LENT-E” class from DNV-GL for her low level of underwater noise.

Symphony of the Seas will debut in

tional from French shipbuilder STX Barcelona, Spain and spend her inaugural and 70 meters high, Royal Caribbean’s Mega ship Symphony of the Seas was France who has been constructing the summer season sailing the Mediterranean before being heading to the Caribbean.