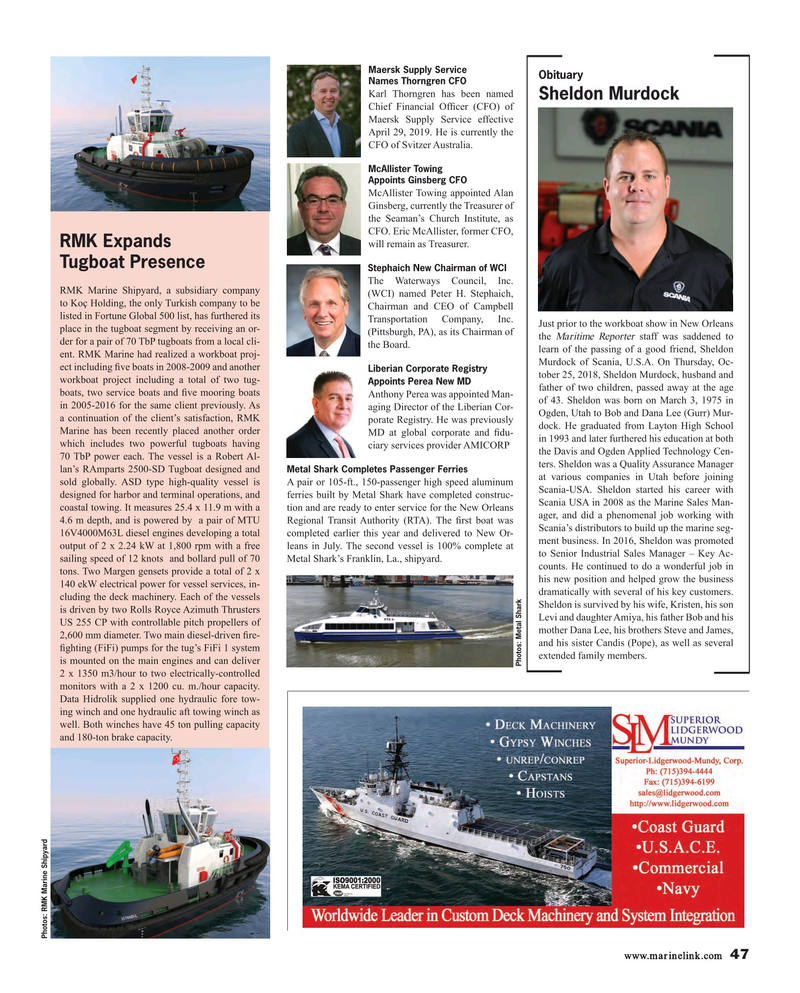 Karl Thorngren has been named

Chief Financial Of? cer (CFO) of

Ginsberg, currently the Treasurer of the Seaman’s Church Institute, as

RMK Expands will remain as Treasurer.

RMK Marine Shipyard, a subsidiary company (WCI) named Peter H. Stephaich, to Koç Holding, the only Turkish company to be

Chairman and CEO of Campbell listed in Fortune Global 500 list, has furthered its

Just prior to the workboat show in New Orleans place in the tugboat segment by receiving an or- (Pittsburgh, PA), as its Chairman of the Maritime Reporter staff was saddened to der for a pair of 70 TbP tugboats from a local cli- the Board. learn of the passing of a good friend, Sheldon ent. RMK Marine had realized a workboat proj-

Ogden, Utah to Bob and Dana Lee (Gurr) Mur- a continuation of the client’s satisfaction, RMK porate Registry. He was previously dock. He graduated from Layton High School

Marine has been recently placed another order

MD at global corporate and ? du- in 1993 and later furthered his education at both which includes two powerful tugboats having ciary services provider AMICORP the Davis and Ogden Applied Technology Cen- 70 TbP power each. The vessel is a Robert Al- ters. Sheldon was a Quality Assurance Manager lan’s RAmparts 2500-SD Tugboat designed and

Scania-USA. Sheldon started his career with designed for harbor and terminal operations, and ferries built by Metal Shark have completed construc-

Scania USA in 2008 as the Marine Sales Man- coastal towing. It measures 25.4 x 11.9 m with a tion and are ready to enter service for the New Orleans ager, and did a phenomenal job working with 4.6 m depth, and is powered by a pair of MTU Regional Transit Authority (RTA). The ? rst boat was

Scania’s distributors to build up the marine seg- 16V4000M63L diesel engines developing a total completed earlier this year and delivered to New Or- ment business. In 2016, Sheldon was promoted output of 2 x 2.24 kW at 1,800 rpm with a free leans in July. The second vessel is 100% complete at to Senior Industrial Sales Manager – Key Ac- sailing speed of 12 knots and bollard pull of 70 Metal Shark’s Franklin, La., shipyard.

counts. He continued to do a wonderful job in tons. Two Margen gensets provide a total of 2 x his new position and helped grow the business 140 ekW electrical power for vessel services, in- dramatically with several of his key customers. cluding the deck machinery. Each of the vessels

Sheldon is survived by his wife, Kristen, his son is driven by two Rolls Royce Azimuth Thrusters

Levi and daughter Amiya, his father Bob and his

is mounted on the main engines and can deliver