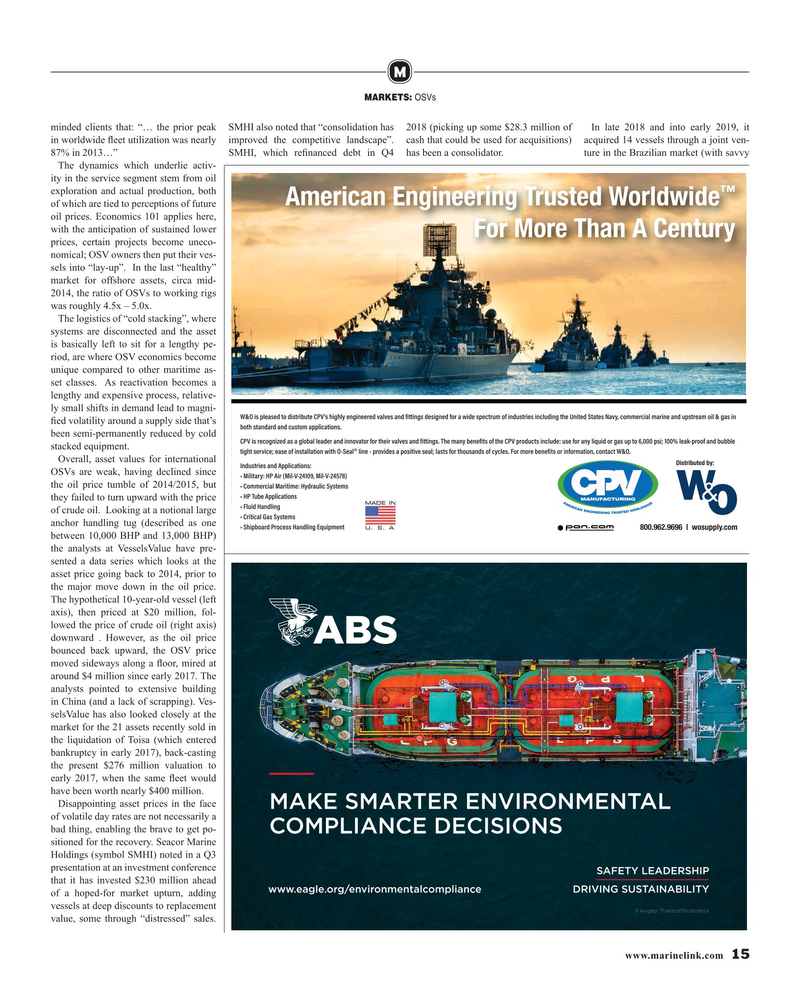 MARKETS: OSVs minded clients that: “… the prior peak SMHI also noted that “consolidation has 2018 (picking up some $28.3 million of In late 2018 and into early 2019, it in worldwide ? eet utilization was nearly improved the competitive landscape”. cash that could be used for acquisitions) acquired 14 vessels through a joint ven- 87% in 2013…” SMHI, which re? nanced debt in Q4 has been a consolidator. ture in the Brazilian market (with savvy

The dynamics which underlie activ- ity in the service segment stem from oil exploration and actual production, both of which are tied to perceptions of future oil prices. Economics 101 applies here, with the anticipation of sustained lower prices, certain projects become uneco- nomical; OSV owners then put their ves- sels into “lay-up”. In the last “healthy” market for offshore assets, circa mid- 2014, the ratio of OSVs to working rigs was roughly 4.5x – 5.0x.

The logistics of “cold stacking”, where systems are disconnected and the asset is basically left to sit for a lengthy pe- riod, are where OSV economics become unique compared to other maritime as- set classes. As reactivation becomes a lengthy and expensive process, relative- ly small shifts in demand lead to magni- ? ed volatility around a supply side that’s been semi-permanently reduced by cold stacked equipment.

OSVs are weak, having declined since the oil price tumble of 2014/2015, but they failed to turn upward with the price of crude oil. Looking at a notional large anchor handling tug (described as one between 10,000 BHP and 13,000 BHP) the analysts at VesselsValue have pre- sented a data series which looks at the asset price going back to 2014, prior to the major move down in the oil price.

The hypothetical 10-year-old vessel (left axis), then priced at $20 million, fol- lowed the price of crude oil (right axis) downward . However, as the oil price bounced back upward, the OSV price moved sideways along a ? oor, mired at around $4 million since early 2017. The analysts pointed to extensive building in China (and a lack of scrapping). Ves- selsValue has also looked closely at the market for the 21 assets recently sold in the liquidation of Toisa (which entered bankruptcy in early 2017), back-casting the present $276 million valuation to early 2017, when the same ? eet would have been worth nearly $400 million.

Disappointing asset prices in the face

MAKE SMARTER ENVIRONMENTAL of volatile day rates are not necessarily a bad thing, enabling the brave to get po-