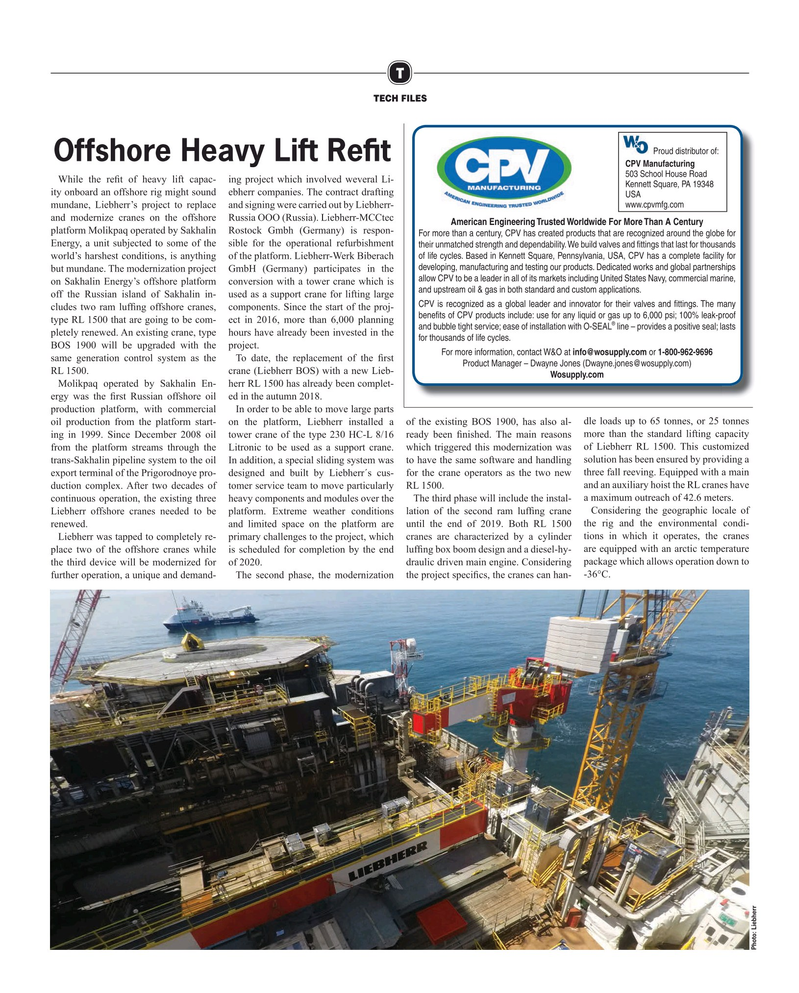 While the re? t of heavy lift capac- ing project which involved weveral Li-

For more than a century, CPV has created products that are recognized around the globe for

Energy, a unit subjected to some of the sible for the operational refurbishment their unmatched strength and dependability. We build valves and ?ttings that last for thousands of life cycles. Based in Kennett Square, Pennsylvania, USA, CPV has a complete facility for world’s harshest conditions, is anything of the platform. Liebherr-Werk Biberach developing, manufacturing and testing our products. Dedicated works and global partnerships but mundane. The modernization project GmbH (Germany) participates in the allow CPV to be a leader in all of its markets including United States Navy, commercial marine, on Sakhalin Energy’s offshore platform conversion with a tower crane which is and upstream oil & gas in both standard and custom applications.

CPV is recognized as a global leader and innovator for their valves and ?ttings. The many cludes two ram luf? ng offshore cranes, components. Since the start of the proj- bene?ts of CPV products include: use for any liquid or gas up to 6,000 psi; 100% leak-proof type RL 1500 that are going to be com- ect in 2016, more than 6,000 planning ® and bubble tight service; ease of installation with O-SEAL line – provides a positive seal; lasts pletely renewed. An existing crane, type hours have already been invested in the for thousands of life cycles.

BOS 1900 will be upgraded with the project.

For more information, contact W&O at LQIR#ZRVXSSO\FRP or same generation control system as the To date, the replacement of the ? rst

Molikpaq operated by Sakhalin En- herr RL 1500 has already been complet- ergy was the ? rst Russian offshore oil ed in the autumn 2018. production platform, with commercial In order to be able to move large parts oil production from the platform start- on the platform, Liebherr installed a of the existing BOS 1900, has also al- dle loads up to 65 tonnes, or 25 tonnes ing in 1999. Since December 2008 oil tower crane of the type 230 HC-L 8/16 ready been ? nished. The main reasons more than the standard lifting capacity from the platform streams through the Litronic to be used as a support crane. which triggered this modernization was of Liebherr RL 1500. This customized trans-Sakhalin pipeline system to the oil In addition, a special sliding system was to have the same software and handling solution has been ensured by providing a export terminal of the Prigorodnoye pro- designed and built by Liebherr´s cus- for the crane operators as the two new three fall reeving. Equipped with a main duction complex. After two decades of tomer service team to move particularly RL 1500. and an auxiliary hoist the RL cranes have continuous operation, the existing three heavy components and modules over the The third phase will include the instal- a maximum outreach of 42.6 meters.

Liebherr offshore cranes needed to be platform. Extreme weather conditions lation of the second ram luf? ng crane Considering the geographic locale of renewed. and limited space on the platform are until the end of 2019. Both RL 1500 the rig and the environmental condi-

Liebherr was tapped to completely re- primary challenges to the project, which cranes are characterized by a cylinder tions in which it operates, the cranes place two of the offshore cranes while is scheduled for completion by the end luf? ng box boom design and a diesel-hy- are equipped with an arctic temperature the third device will be modernized for of 2020. draulic driven main engine. Considering package which allows operation down to further operation, a unique and demand- The second phase, the modernization the project speci? cs, the cranes can han- -36°C.