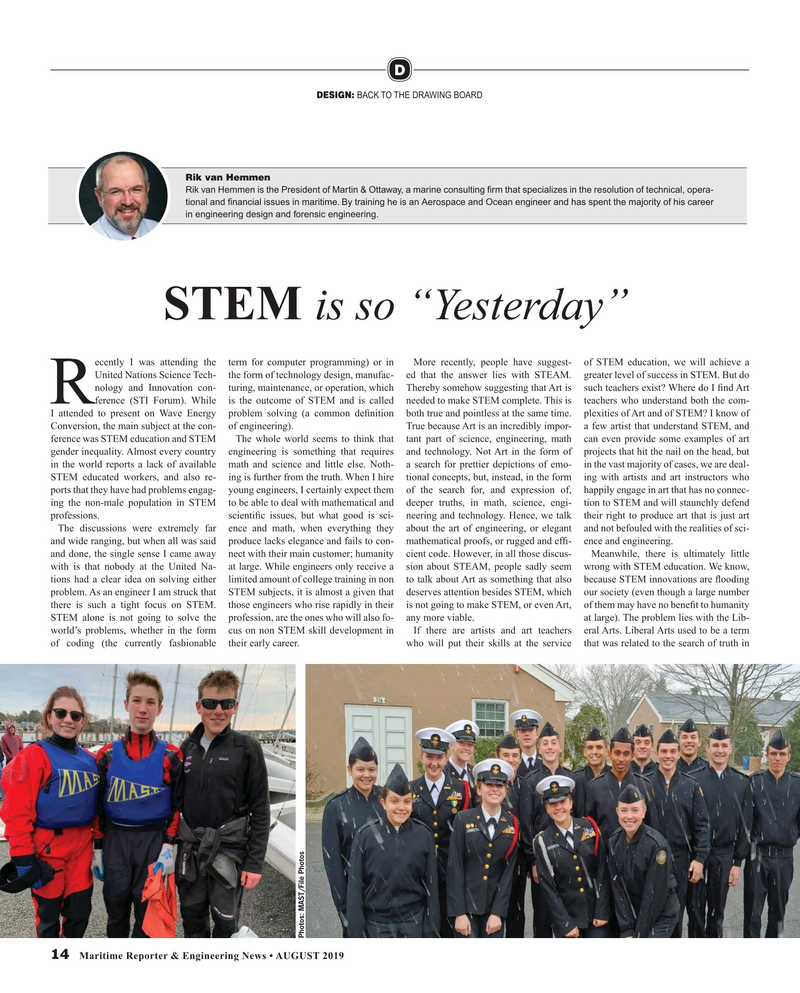 DESIGN: BACK TO THE DRAWING BOARD

Rik van Hemmen is the President of Martin & Ottaway, a marine consulting ? rm that specializes in the resolution of technical, opera- tional and ? nancial issues in maritime. By training he is an Aerospace and Ocean engineer and has spent the majority of his career in engineering design and forensic engineering.

STEM is so “Yesterday” ecently I was attending the term for computer programming) or in More recently, people have suggest- of STEM education, we will achieve a

United Nations Science Tech- the form of technology design, manufac- ed that the answer lies with STEAM. greater level of success in STEM. But do nology and Innovation con- turing, maintenance, or operation, which Thereby somehow suggesting that Art is such teachers exist? Where do I ? nd Art

Rference (STI Forum). While is the outcome of STEM and is called needed to make STEM complete. This is teachers who understand both the com-

I attended to present on Wave Energy problem solving (a common de? nition both true and pointless at the same time. plexities of Art and of STEM? I know of

Conversion, the main subject at the con- of engineering). True because Art is an incredibly impor- a few artist that understand STEM, and ference was STEM education and STEM The whole world seems to think that tant part of science, engineering, math can even provide some examples of art gender inequality. Almost every country engineering is something that requires and technology. Not Art in the form of projects that hit the nail on the head, but in the world reports a lack of available math and science and little else. Noth- a search for prettier depictions of emo- in the vast majority of cases, we are deal-

STEM educated workers, and also re- ing is further from the truth. When I hire tional concepts, but, instead, in the form ing with artists and art instructors who ports that they have had problems engag- young engineers, I certainly expect them of the search for, and expression of, happily engage in art that has no connec- ing the non-male population in STEM to be able to deal with mathematical and deeper truths, in math, science, engi- tion to STEM and will staunchly defend professions. scienti? c issues, but what good is sci- neering and technology. Hence, we talk their right to produce art that is just art

The discussions were extremely far ence and math, when everything they about the art of engineering, or elegant and not befouled with the realities of sci- and wide ranging, but when all was said produce lacks elegance and fails to con- mathematical proofs, or rugged and ef? - ence and engineering.

and done, the single sense I came away nect with their main customer; humanity cient code. However, in all those discus- Meanwhile, there is ultimately little with is that nobody at the United Na- at large. While engineers only receive a sion about STEAM, people sadly seem wrong with STEM education. We know, tions had a clear idea on solving either limited amount of college training in non to talk about Art as something that also because STEM innovations are ? ooding problem. As an engineer I am struck that STEM subjects, it is almost a given that deserves attention besides STEM, which our society (even though a large number there is such a tight focus on STEM. those engineers who rise rapidly in their is not going to make STEM, or even Art, of them may have no bene? t to humanity

STEM alone is not going to solve the profession, are the ones who will also fo- any more viable. at large). The problem lies with the Lib- world’s problems, whether in the form cus on non STEM skill development in If there are artists and art teachers eral Arts. Liberal Arts used to be a term of coding (the currently fashionable their early career. who will put their skills at the service that was related to the search of truth in