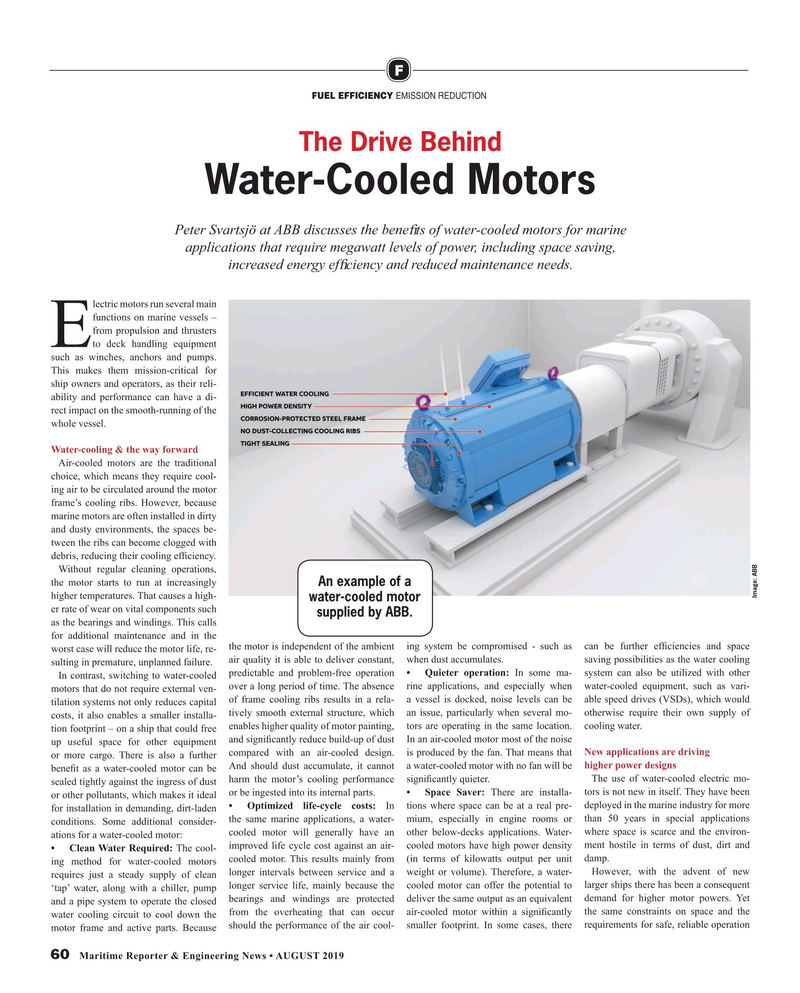 Eto deck handling equipment such as winches, anchors and pumps.

This makes them mission-critical for ship owners and operators, as their reli- ability and performance can have a di- rect impact on the smooth-running of the whole vessel.

Air-cooled motors are the traditional choice, which means they require cool- ing air to be circulated around the motor frame’s cooling ribs. However, because marine motors are often installed in dirty and dusty environments, the spaces be- tween the ribs can become clogged with debris, reducing their cooling ef? ciency.

Without regular cleaning operations, the motor starts to run at increasingly

An example of a

Image: ABB higher temperatures. That causes a high- water-cooled motor er rate of wear on vital components such supplied by ABB. as the bearings and windings. This calls for additional maintenance and in the the motor is independent of the ambient ing system be compromised - such as can be further ef? ciencies and space worst case will reduce the motor life, re- air quality it is able to deliver constant, when dust accumulates. saving possibilities as the water cooling sulting in premature, unplanned failure.

In contrast, switching to water-cooled predictable and problem-free operation • Quieter operation: In some ma- system can also be utilized with other over a long period of time. The absence rine applications, and especially when water-cooled equipment, such as vari- motors that do not require external ven- tilation systems not only reduces capital of frame cooling ribs results in a rela- a vessel is docked, noise levels can be able speed drives (VSDs), which would tively smooth external structure, which an issue, particularly when several mo- otherwise require their own supply of costs, it also enables a smaller installa- tion footprint – on a ship that could free enables higher quality of motor painting, tors are operating in the same location. cooling water.

up useful space for other equipment and signi? cantly reduce build-up of dust In an air-cooled motor most of the noise or more cargo. There is also a further compared with an air-cooled design. is produced by the fan. That means that New applications are driving bene? t as a water-cooled motor can be And should dust accumulate, it cannot a water-cooled motor with no fan will be higher power designs sealed tightly against the ingress of dust harm the motor’s cooling performance signi? cantly quieter. The use of water-cooled electric mo- or other pollutants, which makes it ideal or be ingested into its internal parts. • Space Saver: There are installa- tors is not new in itself. They have been for installation in demanding, dirt-laden • Optimized life-cycle costs: In tions where space can be at a real pre- deployed in the marine industry for more the same marine applications, a water- mium, especially in engine rooms or than 50 years in special applications conditions. Some additional consider- cooled motor will generally have an other below-decks applications. Water- where space is scarce and the environ- ations for a water-cooled motor: improved life cycle cost against an air- cooled motors have high power density ment hostile in terms of dust, dirt and • Clean Water Required: The cool- ing method for water-cooled motors cooled motor. This results mainly from (in terms of kilowatts output per unit damp.

requires just a steady supply of clean longer intervals between service and a weight or volume). Therefore, a water- However, with the advent of new ‘tap’ water, along with a chiller, pump longer service life, mainly because the cooled motor can offer the potential to larger ships there has been a consequent and a pipe system to operate the closed bearings and windings are protected deliver the same output as an equivalent demand for higher motor powers. Yet water cooling circuit to cool down the from the overheating that can occur air-cooled motor within a signi? cantly the same constraints on space and the motor frame and active parts. Because should the performance of the air cool- smaller footprint. In some cases, there requirements for safe, reliable operation 60 Maritime Reporter & Engineering News • AUGUST 2019