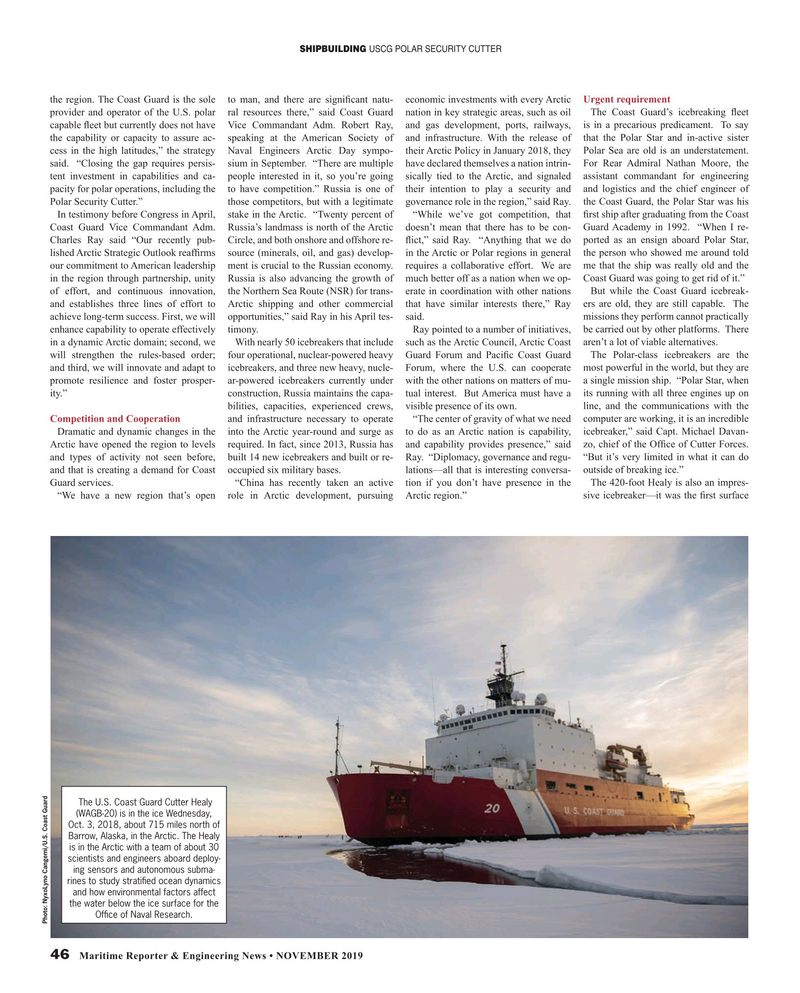 SHIPBUILDING USCG POLAR SECURITY CUTTER the region. The Coast Guard is the sole to man, and there are signi? cant natu- economic investments with every Arctic Urgent requirement provider and operator of the U.S. polar ral resources there,” said Coast Guard nation in key strategic areas, such as oil The Coast Guard’s icebreaking ? eet capable ? eet but currently does not have Vice Commandant Adm. Robert Ray, and gas development, ports, railways, is in a precarious predicament. To say the capability or capacity to assure ac- speaking at the American Society of and infrastructure. With the release of that the Polar Star and in-active sister cess in the high latitudes,” the strategy Naval Engineers Arctic Day sympo- their Arctic Policy in January 2018, they Polar Sea are old is an understatement. said. “Closing the gap requires persis- sium in September. “There are multiple have declared themselves a nation intrin- For Rear Admiral Nathan Moore, the tent investment in capabilities and ca- people interested in it, so you’re going sically tied to the Arctic, and signaled assistant commandant for engineering pacity for polar operations, including the to have competition.” Russia is one of their intention to play a security and and logistics and the chief engineer of

Polar Security Cutter.” those competitors, but with a legitimate governance role in the region,” said Ray. the Coast Guard, the Polar Star was his

In testimony before Congress in April, stake in the Arctic. “Twenty percent of “While we’ve got competition, that ? rst ship after graduating from the Coast

Coast Guard Vice Commandant Adm. Russia’s landmass is north of the Arctic doesn’t mean that there has to be con- Guard Academy in 1992. “When I re-

Charles Ray said “Our recently pub- Circle, and both onshore and offshore re- ? ict,” said Ray. “Anything that we do ported as an ensign aboard Polar Star, lished Arctic Strategic Outlook reaf? rms source (minerals, oil, and gas) develop- in the Arctic or Polar regions in general the person who showed me around told our commitment to American leadership ment is crucial to the Russian economy. requires a collaborative effort. We are me that the ship was really old and the in the region through partnership, unity Russia is also advancing the growth of much better off as a nation when we op- Coast Guard was going to get rid of it.” of effort, and continuous innovation, the Northern Sea Route (NSR) for trans- erate in coordination with other nations But while the Coast Guard icebreak- and establishes three lines of effort to Arctic shipping and other commercial that have similar interests there,” Ray ers are old, they are still capable. The achieve long-term success. First, we will opportunities,” said Ray in his April tes- said. missions they perform cannot practically enhance capability to operate effectively timony. Ray pointed to a number of initiatives, be carried out by other platforms. There in a dynamic Arctic domain; second, we With nearly 50 icebreakers that include such as the Arctic Council, Arctic Coast aren’t a lot of viable alternatives. will strengthen the rules-based order; four operational, nuclear-powered heavy Guard Forum and Paci? c Coast Guard The Polar-class icebreakers are the and third, we will innovate and adapt to icebreakers, and three new heavy, nucle- Forum, where the U.S. can cooperate most powerful in the world, but they are promote resilience and foster prosper- ar-powered icebreakers currently under with the other nations on matters of mu- a single mission ship. “Polar Star, when ity.” construction, Russia maintains the capa- tual interest. But America must have a its running with all three engines up on bilities, capacities, experienced crews, visible presence of its own. line, and the communications with the

Competition and Cooperation and infrastructure necessary to operate “The center of gravity of what we need computer are working, it is an incredible

Dramatic and dynamic changes in the into the Arctic year-round and surge as to do as an Arctic nation is capability, icebreaker,” said Capt. Michael Davan-

Arctic have opened the region to levels required. In fact, since 2013, Russia has and capability provides presence,” said zo, chief of the Of? ce of Cutter Forces. and types of activity not seen before, built 14 new icebreakers and built or re- Ray. “Diplomacy, governance and regu- “But it’s very limited in what it can do and that is creating a demand for Coast occupied six military bases. lations—all that is interesting conversa- outside of breaking ice.”

Guard services. “China has recently taken an active tion if you don’t have presence in the The 420-foot Healy is also an impres- “We have a new region that’s open role in Arctic development, pursuing Arctic region.” sive icebreaker—it was the ? rst surface The U.S. Coast Guard Cutter Healy (WAGB-20) is in the ice Wednesday,

Barrow, Alaska, in the Arctic. The Healy is in the Arctic with a team of about 30 scientists and engineers aboard deploy- ing sensors and autonomous subma- rines to study strati? ed ocean dynamics and how environmental factors affect the water below the ice surface for the

Of? ce of Naval Research.