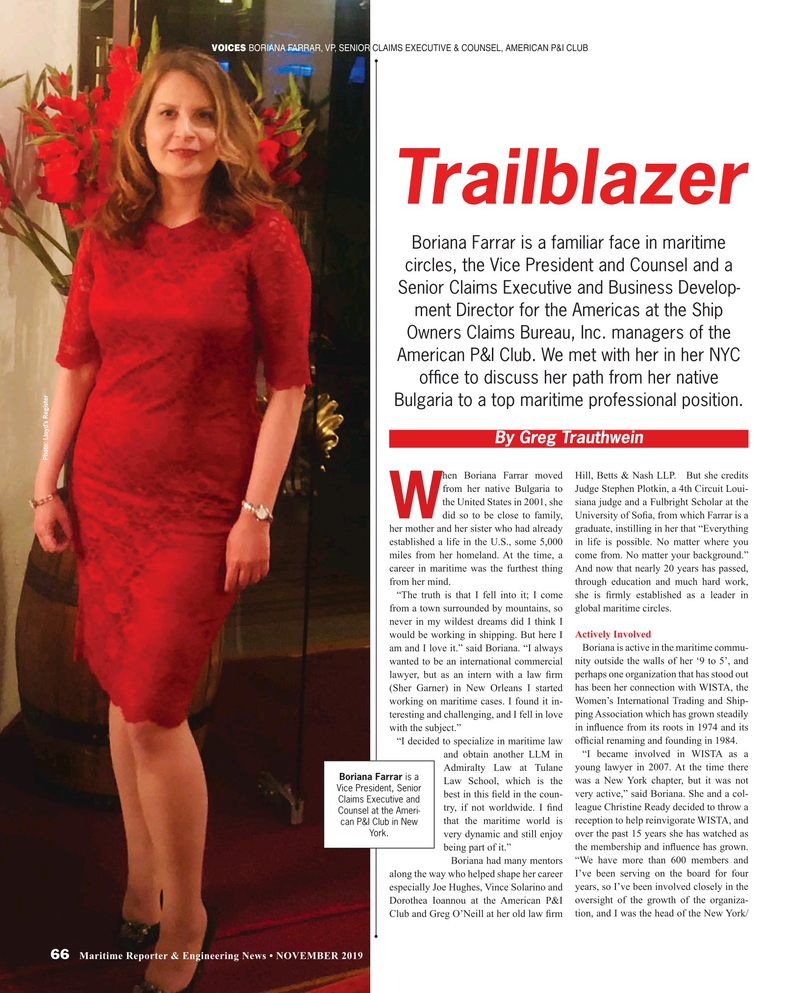 Boriana Farrar is a familiar face in maritime circles, the Vice President and Counsel and a

American P&I Club. We met with her in her NYC of? ce to discuss her path from her native

Photo: Lloyd’s Register hen Boriana Farrar moved Hill, Betts & Nash LLP. But she credits from her native Bulgaria to Judge Stephen Plotkin, a 4th Circuit Loui- the United States in 2001, she siana judge and a Fulbright Scholar at the

W did so to be close to family, University of So? a, from which Farrar is a her mother and her sister who had already graduate, instilling in her that “Everything established a life in the U.S., some 5,000 in life is possible. No matter where you miles from her homeland. At the time, a come from. No matter your background.” career in maritime was the furthest thing And now that nearly 20 years has passed, from her mind. through education and much hard work, “The truth is that I fell into it; I come she is ? rmly established as a leader in from a town surrounded by mountains, so global maritime circles.

never in my wildest dreams did I think I would be working in shipping. But here I Actively Involved am and I love it.” said Boriana. “I always Boriana is active in the maritime commu- wanted to be an international commercial nity outside the walls of her ‘9 to 5’, and lawyer, but as an intern with a law ? rm perhaps one organization that has stood out (Sher Garner) in New Orleans I started has been her connection with WISTA, the working on maritime cases. I found it in- Women’s International Trading and Ship- teresting and challenging, and I fell in love ping Association which has grown steadily with the subject.” in in? uence from its roots in 1974 and its “I decided to specialize in maritime law of? cial renaming and founding in 1984.

Admiralty Law at Tulane young lawyer in 2007. At the time there

Boriana Farrar is a

Law School, which is the was a New York chapter, but it was not

Vice President, Senior best in this ? eld in the coun- very active,” said Boriana. She and a col-

Claims Executive and try, if not worldwide. I ? nd league Christine Ready decided to throw a

Counsel at the Ameri- that the maritime world is reception to help reinvigorate WISTA, and can P&I Club in New

York. very dynamic and still enjoy over the past 15 years she has watched as being part of it.” the membership and in? uence has grown.

Boriana had many mentors “We have more than 600 members and along the way who helped shape her career I’ve been serving on the board for four especially Joe Hughes, Vince Solarino and years, so I’ve been involved closely in the

Club and Greg O’Neill at her old law ? rm tion, and I was the head of the New York/ 66 Maritime Reporter & Engineering News • NOVEMBER 2019