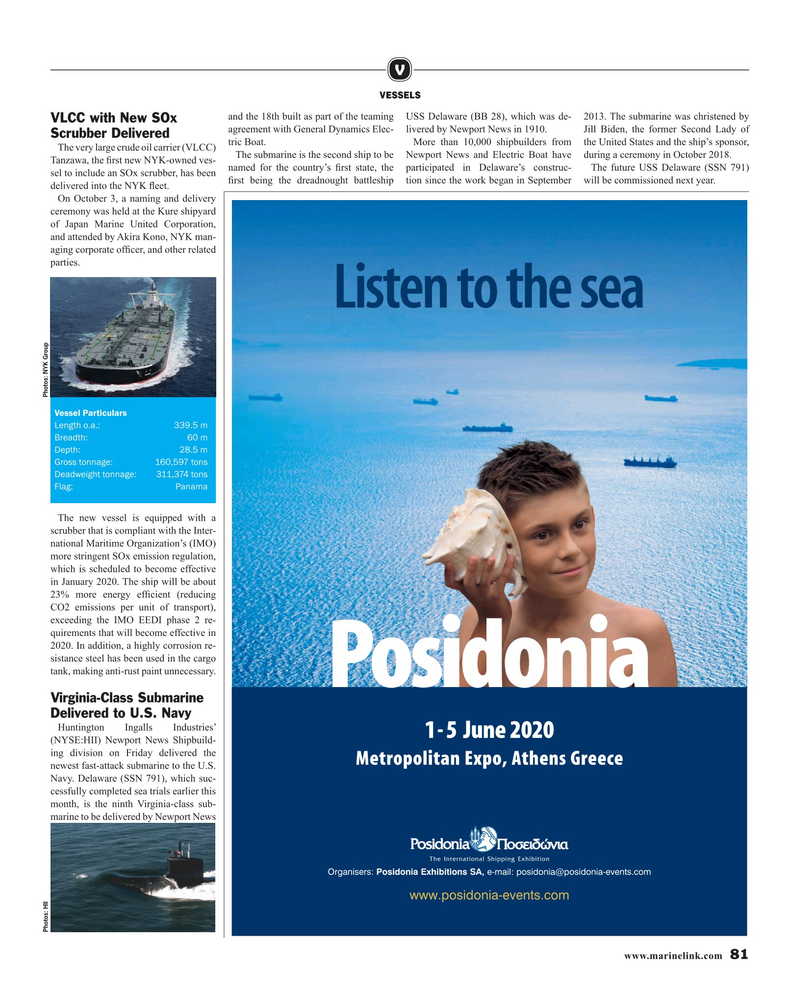 VESSELS and the 18th built as part of the teaming USS Delaware (BB 28), which was de- 2013. The submarine was christened by

Scrubber Delivered tric Boat. More than 10,000 shipbuilders from the United States and the ship’s sponsor,

The submarine is the second ship to be Newport News and Electric Boat have during a ceremony in October 2018.

Tanzawa, the ? rst new NYK-owned ves- named for the country’s ? rst state, the participated in Delaware’s construc- The future USS Delaware (SSN 791) sel to include an SOx scrubber, has been ? rst being the dreadnought battleship tion since the work began in September will be commissioned next year.

delivered into the NYK ? eet.

On October 3, a naming and delivery ceremony was held at the Kure shipyard of Japan Marine United Corporation, and attended by Akira Kono, NYK man- aging corporate of? cer, and other related parties.

Listen to the sea

The new vessel is equipped with a scrubber that is compliant with the Inter- national Maritime Organization’s (IMO) more stringent SOx emission regulation, which is scheduled to become effective in January 2020. The ship will be about 23% more energy ef? cient (reducing

CO2 emissions per unit of transport), exceeding the IMO EEDI phase 2 re- quirements that will become effective in 2020. In addition, a highly corrosion re- sistance steel has been used in the cargo tank, making anti-rust paint unnecessary.