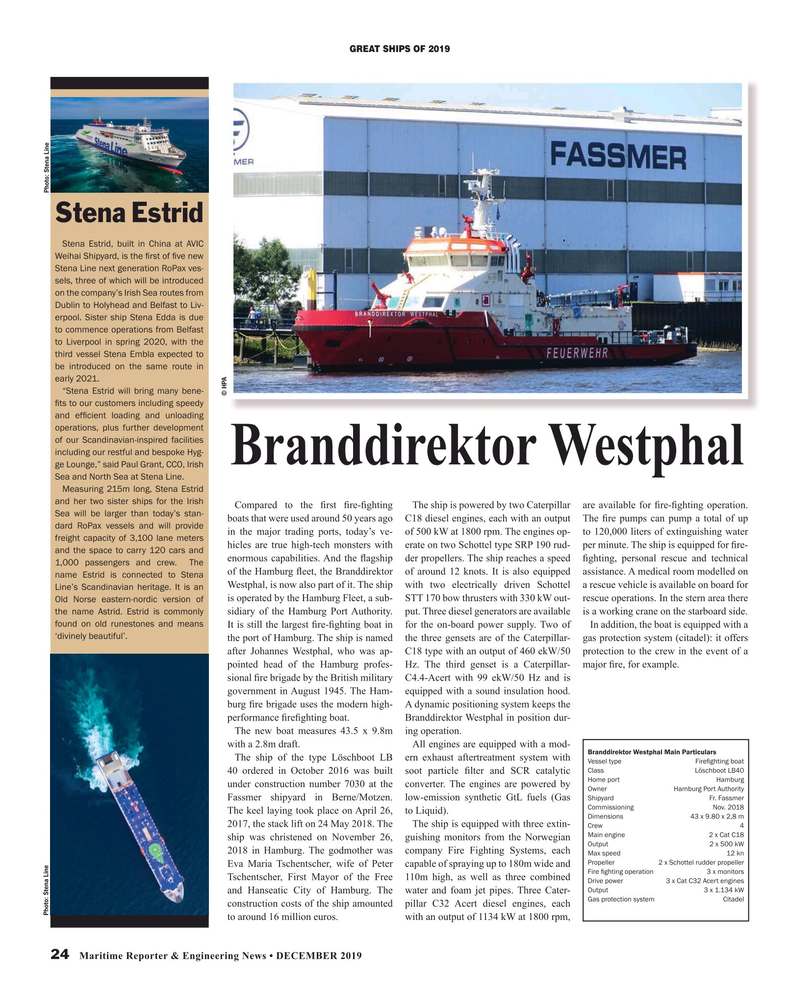 Weihai Shipyard, is the ? rst of ? ve new

Stena Line next generation RoPax ves- sels, three of which will be introduced on the company’s Irish Sea routes from

Dublin to Holyhead and Belfast to Liv- erpool. Sister ship Stena Edda is due to commence operations from Belfast to Liverpool in spring 2020, with the third vessel Stena Embla expected to be introduced on the same route in early 2021.

“Stena Estrid will bring many bene- © HPA ? ts to our customers including speedy and ef? cient loading and unloading operations, plus further development of our Scandinavian-inspired facilities including our restful and bespoke Hyg-

Measuring 215m long, Stena Estrid and her two sister ships for the Irish

Sea will be larger than today’s stan- boats that were used around 50 years ago C18 diesel engines, each with an output The ? re pumps can pump a total of up dard RoPax vessels and will provide in the major trading ports, today’s ve- of 500 kW at 1800 rpm. The engines op- to 120,000 liters of extinguishing water freight capacity of 3,100 lane meters hicles are true high-tech monsters with erate on two Schottel type SRP 190 rud- per minute. The ship is equipped for ? re- and the space to carry 120 cars and enormous capabilities. And the ? agship der propellers. The ship reaches a speed ? ghting, personal rescue and technical 1,000 passengers and crew. The of the Hamburg ? eet, the Branddirektor of around 12 knots. It is also equipped assistance. A medical room modelled on name Estrid is connected to Stena

Westphal, is now also part of it. The ship with two electrically driven Schottel a rescue vehicle is available on board for

Line’s Scandinavian heritage. It is an is operated by the Hamburg Fleet, a sub- STT 170 bow thrusters with 330 kW out- rescue operations. In the stern area there

Old Norse eastern-nordic version of the name Astrid. Estrid is commonly sidiary of the Hamburg Port Authority. put. Three diesel generators are available is a working crane on the starboard side. found on old runestones and means

It is still the largest ? re-? ghting boat in for the on-board power supply. Two of In addition, the boat is equipped with a ‘divinely beautiful’.

the port of Hamburg. The ship is named the three gensets are of the Caterpillar- gas protection system (citadel): it offers after Johannes Westphal, who was ap- C18 type with an output of 460 ekW/50 protection to the crew in the event of a pointed head of the Hamburg profes- Hz. The third genset is a Caterpillar- major ? re, for example.

sional ? re brigade by the British military C4.4-Acert with 99 ekW/50 Hz and is government in August 1945. The Ham- equipped with a sound insulation hood. burg ? re brigade uses the modern high- A dynamic positioning system keeps the performance ? re? ghting boat. Branddirektor Westphal in position dur-

with a 2.8m draft. All engines are equipped with a mod-

Home port Hamburg under construction number 7030 at the converter. The engines are powered by

The keel laying took place on April 26, to Liquid).

Output 2 x 500 kW 2018 in Hamburg. The godmother was company Fire Fighting Systems, each

Eva Maria Tschentscher, wife of Peter capable of spraying up to 180m wide and

Tschentscher, First Mayor of the Free 110m high, as well as three combined