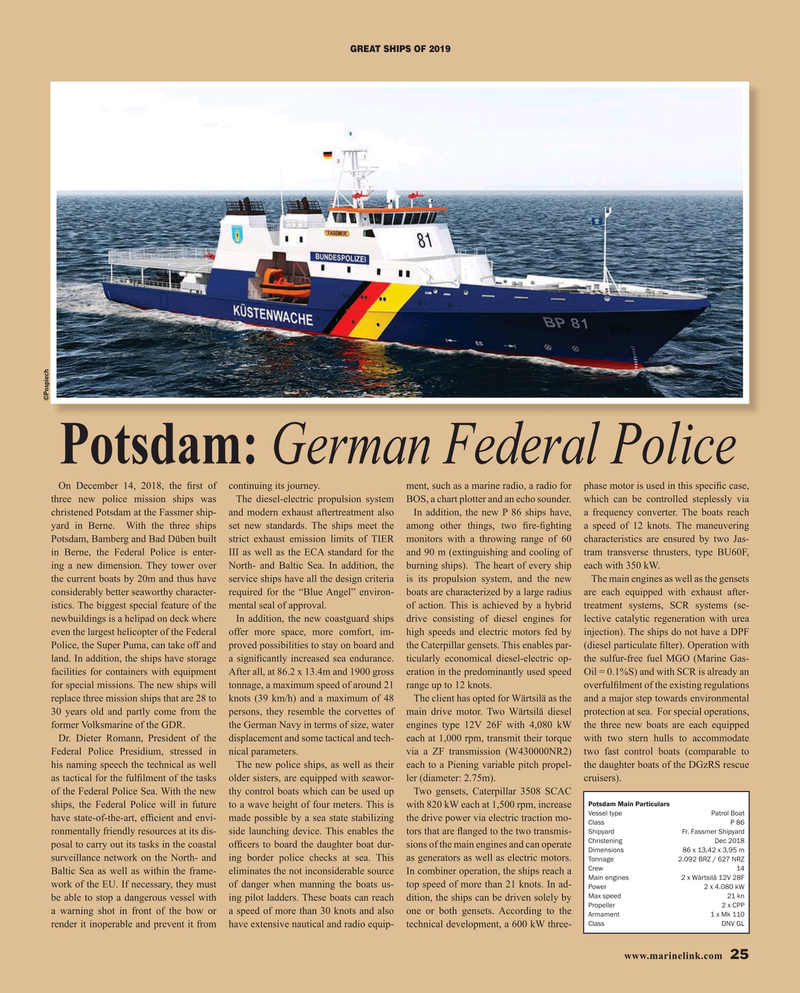 On December 14, 2018, the ? rst of continuing its journey. ment, such as a marine radio, a radio for phase motor is used in this speci? c case, three new police mission ships was The diesel-electric propulsion system BOS, a chart plotter and an echo sounder. which can be controlled steplessly via christened Potsdam at the Fassmer ship- and modern exhaust aftertreatment also In addition, the new P 86 ships have, a frequency converter. The boats reach yard in Berne. With the three ships set new standards. The ships meet the among other things, two ? re-? ghting a speed of 12 knots. The maneuvering

Potsdam, Bamberg and Bad Düben built strict exhaust emission limits of TIER monitors with a throwing range of 60 characteristics are ensured by two Jas- in Berne, the Federal Police is enter- III as well as the ECA standard for the and 90 m (extinguishing and cooling of tram transverse thrusters, type BU60F, ing a new dimension. They tower over North- and Baltic Sea. In addition, the burning ships). The heart of every ship each with 350 kW. the current boats by 20m and thus have service ships have all the design criteria is its propulsion system, and the new The main engines as well as the gensets considerably better seaworthy character- required for the “Blue Angel” environ- boats are characterized by a large radius are each equipped with exhaust after- istics. The biggest special feature of the mental seal of approval. of action. This is achieved by a hybrid treatment systems, SCR systems (se- newbuildings is a helipad on deck where In addition, the new coastguard ships drive consisting of diesel engines for lective catalytic regeneration with urea even the largest helicopter of the Federal offer more space, more comfort, im- high speeds and electric motors fed by injection). The ships do not have a DPF

Police, the Super Puma, can take off and proved possibilities to stay on board and the Caterpillar gensets. This enables par- (diesel particulate ? lter). Operation with land. In addition, the ships have storage a signi? cantly increased sea endurance. ticularly economical diesel-electric op- the sulfur-free fuel MGO (Marine Gas- facilities for containers with equipment After all, at 86.2 x 13.4m and 1900 gross eration in the predominantly used speed Oil = 0.1%S) and with SCR is already an for special missions. The new ships will tonnage, a maximum speed of around 21 range up to 12 knots. overful? lment of the existing regulations replace three mission ships that are 28 to knots (39 km/h) and a maximum of 48 The client has opted for Wärtsilä as the and a major step towards environmental 30 years old and partly come from the persons, they resemble the corvettes of main drive motor. Two Wärtsilä diesel protection at sea. For special operations, former Volksmarine of the GDR. the German Navy in terms of size, water engines type 12V 26F with 4,080 kW the three new boats are each equipped

Dr. Dieter Romann, President of the displacement and some tactical and tech- each at 1,000 rpm, transmit their torque with two stern hulls to accommodate

Federal Police Presidium, stressed in nical parameters. via a ZF transmission (W430000NR2) two fast control boats (comparable to his naming speech the technical as well The new police ships, as well as their each to a Piening variable pitch propel- the daughter boats of the DGzRS rescue as tactical for the ful? lment of the tasks older sisters, are equipped with seawor- ler (diameter: 2.75m). cruisers).

of the Federal Police Sea. With the new thy control boats which can be used up Two gensets, Caterpillar 3508 SCAC

Potsdam Main Particulars ships, the Federal Police will in future to a wave height of four meters. This is with 820 kW each at 1,500 rpm, increase

Shipyard Fr. Fassmer Shipyard ronmentally friendly resources at its dis- side launching device. This enables the tors that are ? anged to the two transmis-

Christening Dec 2018 posal to carry out its tasks in the coastal of? cers to board the daughter boat dur- sions of the main engines and can operate

Dimensions 86 x 13,42 x 3,95 m surveillance network on the North- and ing border police checks at sea. This as generators as well as electric motors.

Baltic Sea as well as within the frame- eliminates the not inconsiderable source In combiner operation, the ships reach a

Main engines 2 x Wärtsilä 12V 28F work of the EU. If necessary, they must of danger when manning the boats us- top speed of more than 21 knots. In ad-

Max speed 21 kn be able to stop a dangerous vessel with ing pilot ladders. These boats can reach dition, the ships can be driven solely by

Propeller 2 x CPP a warning shot in front of the bow or a speed of more than 30 knots and also one or both gensets. According to the

Class DNV GL render it inoperable and prevent it from have extensive nautical and radio equip- technical development, a 600 kW three- www.marinelink.com 25