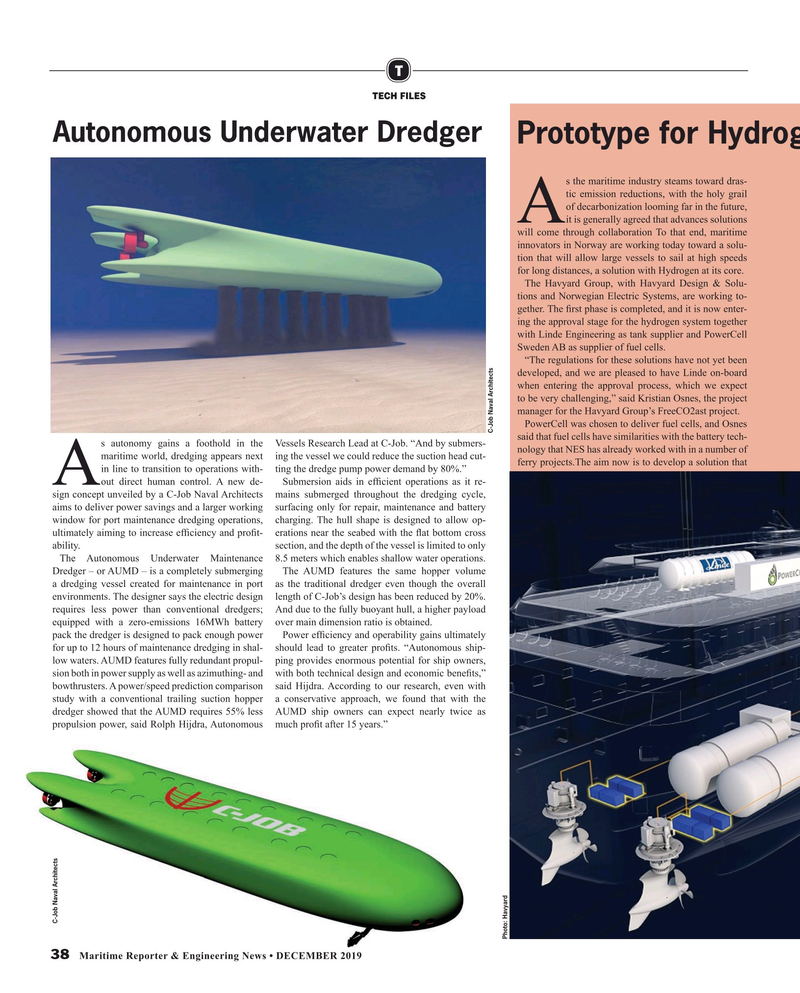 Prototype for Hydroge s the maritime industry steams toward dras- tic emission reductions, with the holy grail of decarbonization looming far in the future,

Ait is generally agreed that advances solutions will come through collaboration To that end, maritime innovators in Norway are working today toward a solu- tion that will allow large vessels to sail at high speeds for long distances, a solution with Hydrogen at its core.

The Havyard Group, with Havyard Design & Solu- tions and Norwegian Electric Systems, are working to- gether. The ? rst phase is completed, and it is now enter- ing the approval stage for the hydrogen system together with Linde Engineering as tank supplier and PowerCell

Sweden AB as supplier of fuel cells. “The regulations for these solutions have not yet been developed, and we are pleased to have Linde on-board when entering the approval process, which we expect to be very challenging,” said Kristian Osnes, the project manager for the Havyard Group’s FreeCO2ast project.

PowerCell was chosen to deliver fuel cells, and Osnes

C-Job Naval Architects said that fuel cells have similarities with the battery tech- s autonomy gains a foothold in the Vessels Research Lead at C-Job. “And by submers- nology that NES has already worked with in a number of maritime world, dredging appears next ing the vessel we could reduce the suction head cut- ferry projects.The aim now is to develop a solution that in line to transition to operations with- ting the dredge pump power demand by 80%.”

Aout direct human control. A new de- Submersion aids in ef? cient operations as it re- sign concept unveiled by a C-Job Naval Architects mains submerged throughout the dredging cycle, aims to deliver power savings and a larger working surfacing only for repair, maintenance and battery window for port maintenance dredging operations, charging. The hull shape is designed to allow op- ultimately aiming to increase ef? ciency and pro? t- erations near the seabed with the ? at bottom cross ability. section, and the depth of the vessel is limited to only

Dredger – or AUMD – is a completely submerging The AUMD features the same hopper volume a dredging vessel created for maintenance in port as the traditional dredger even though the overall environments. The designer says the electric design length of C-Job’s design has been reduced by 20%. requires less power than conventional dredgers; And due to the fully buoyant hull, a higher payload equipped with a zero-emissions 16MWh battery over main dimension ratio is obtained.

pack the dredger is designed to pack enough power Power ef? ciency and operability gains ultimately for up to 12 hours of maintenance dredging in shal- should lead to greater pro? ts. “Autonomous ship- low waters. AUMD features fully redundant propul- ping provides enormous potential for ship owners, sion both in power supply as well as azimuthing- and with both technical design and economic bene? ts,” bowthrusters. A power/speed prediction comparison said Hijdra. According to our research, even with study with a conventional trailing suction hopper a conservative approach, we found that with the dredger showed that the AUMD requires 55% less AUMD ship owners can expect nearly twice as propulsion power, said Rolph Hijdra, Autonomous much pro? t after 15 years.”