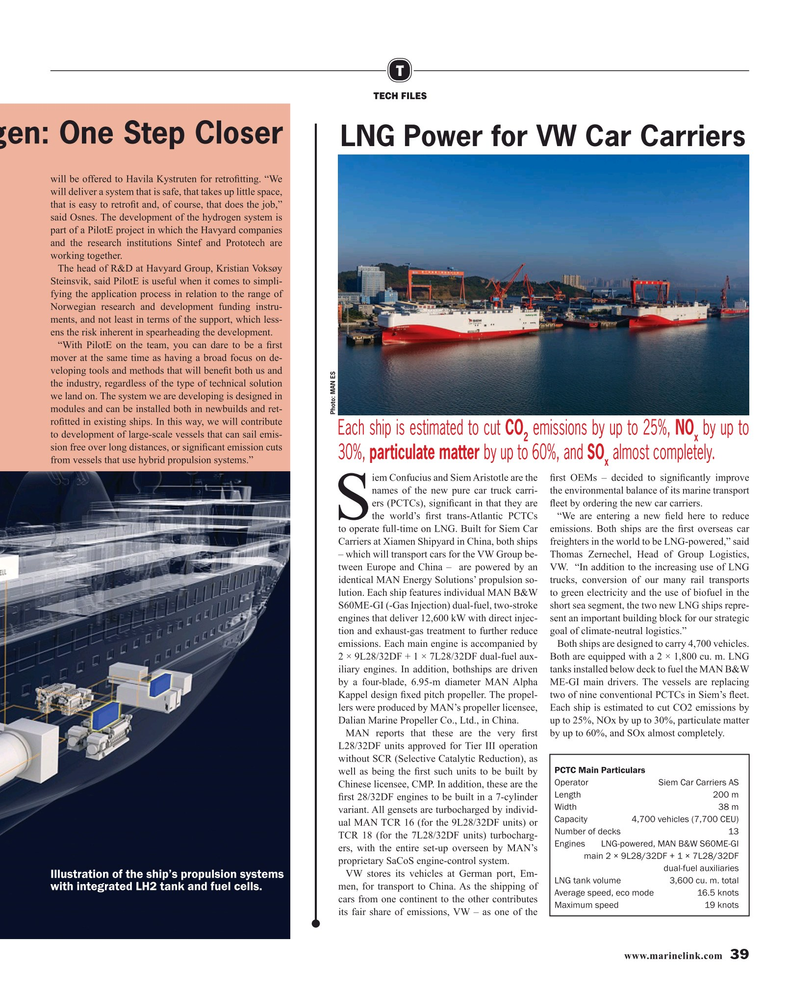 LNG Power for VW Car Carriers will be offered to Havila Kystruten for retro? tting. “We will deliver a system that is safe, that takes up little space, that is easy to retro? t and, of course, that does the job,” said Osnes. The development of the hydrogen system is part of a PilotE project in which the Havyard companies and the research institutions Sintef and Prototech are working together.

The head of R&D at Havyard Group, Kristian Voksøy

Steinsvik, said PilotE is useful when it comes to simpli- fying the application process in relation to the range of

Norwegian research and development funding instru- ments, and not least in terms of the support, which less- ens the risk inherent in spearheading the development.

“With PilotE on the team, you can dare to be a ? rst mover at the same time as having a broad focus on de- veloping tools and methods that will bene? t both us and the industry, regardless of the type of technical solution we land on. The system we are developing is designed in modules and can be installed both in newbuilds and ret-

Photo: MAN ES ro? tted in existing ships. In this way, we will contribute

Each ship is estimated to cut CO emissions by up to 25%, NO by up to to development of large-scale vessels that can sail emis- 2 x sion free over long distances, or signi? cant emission cuts 30%, particulate matter by up to 60%, and SO almost completely.

from vessels that use hybrid propulsion systems.” x iem Confucius and Siem Aristotle are the ? rst OEMs – decided to signi? cantly improve names of the new pure car truck carri- the environmental balance of its marine transport ers (PCTCs), signi? cant in that they are ? eet by ordering the new car carriers.

Sthe world’s ? rst trans-Atlantic PCTCs “We are entering a new ? eld here to reduce to operate full-time on LNG. Built for Siem Car emissions. Both ships are the ? rst overseas car

Carriers at Xiamen Shipyard in China, both ships freighters in the world to be LNG-powered,” said – which will transport cars for the VW Group be- Thomas Zernechel, Head of Group Logistics, tween Europe and China – are powered by an VW. “In addition to the increasing use of LNG identical MAN Energy Solutions’ propulsion so- trucks, conversion of our many rail transports lution. Each ship features individual MAN B&W to green electricity and the use of biofuel in the

MAN reports that these are the very ? rst by up to 60%, and SOx almost completely.

PCTC Main Particulars well as being the ? rst such units to be built by

Chinese licensee, CMP. In addition, these are the

Width 38 m variant. All gensets are turbocharged by individ-

Illustration of the ship’s propulsion systems

LNG tank volume 3,600 cu. m. total men, for transport to China. As the shipping of with integrated LH2 tank and fuel cells.

Average speed, eco mode 16.5 knots cars from one continent to the other contributes

Maximum speed 19 knots its fair share of emissions, VW – as one of the www.marinelink.com 39