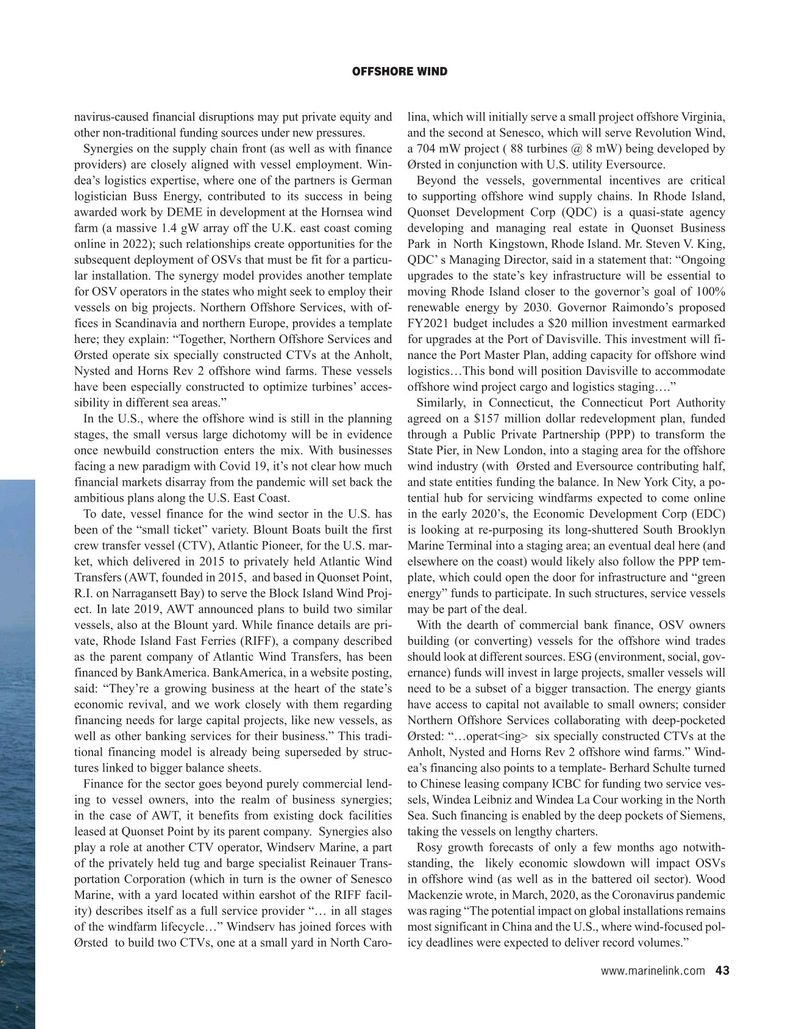 OFFSHORE WIND navirus-caused financial disruptions may put private equity and lina, which will initially serve a small project offshore Virginia, other non-traditional funding sources under new pressures. and the second at Senesco, which will serve Revolution Wind,

Synergies on the supply chain front (as well as with finance a 704 mW project ( 88 turbines @ 8 mW) being developed by providers) are closely aligned with vessel employment. Win- Ørsted in conjunction with U.S. utility Eversource. dea’s logistics expertise, where one of the partners is German Beyond the vessels, governmental incentives are critical logistician Buss Energy, contributed to its success in being to supporting offshore wind supply chains. In Rhode Island, awarded work by DEME in development at the Hornsea wind Quonset Development Corp (QDC) is a quasi-state agency farm (a massive 1.4 gW array off the U.K. east coast coming developing and managing real estate in Quonset Business online in 2022); such relationships create opportunities for the Park in North Kingstown, Rhode Island. Mr. Steven V. King, subsequent deployment of OSVs that must be fit for a particu- QDC’ s Managing Director, said in a statement that: “Ongoing lar installation. The synergy model provides another template upgrades to the state’s key infrastructure will be essential to for OSV operators in the states who might seek to employ their moving Rhode Island closer to the governor’s goal of 100% vessels on big projects. Northern Offshore Services, with of- renewable energy by 2030. Governor Raimondo’s proposed fices in Scandinavia and northern Europe, provides a template FY2021 budget includes a $20 million investment earmarked here; they explain: “Together, Northern Offshore Services and for upgrades at the Port of Davisville. This investment will fi-

In the U.S., where the offshore wind is still in the planning agreed on a $157 million dollar redevelopment plan, funded stages, the small versus large dichotomy will be in evidence through a Public Private Partnership (PPP) to transform the once newbuild construction enters the mix. With businesses State Pier, in New London, into a staging area for the offshore facing a new paradigm with Covid 19, it’s not clear how much wind industry (with Ørsted and Eversource contributing half, financial markets disarray from the pandemic will set back the and state entities funding the balance. In New York City, a po- ambitious plans along the U.S. East Coast. tential hub for servicing windfarms expected to come online

To date, vessel finance for the wind sector in the U.S. has in the early 2020’s, the Economic Development Corp (EDC) been of the “small ticket” variety. Blount Boats built the first is looking at re-purposing its long-shuttered South Brooklyn crew transfer vessel (CTV), Atlantic Pioneer, for the U.S. mar- Marine Terminal into a staging area; an eventual deal here (and ket, which delivered in 2015 to privately held Atlantic Wind elsewhere on the coast) would likely also follow the PPP tem-

Transfers (AWT, founded in 2015, and based in Quonset Point, plate, which could open the door for infrastructure and “green

R.I. on Narragansett Bay) to serve the Block Island Wind Proj- energy” funds to participate. In such structures, service vessels ect. In late 2019, AWT announced plans to build two similar may be part of the deal. vessels, also at the Blount yard. While finance details are pri- With the dearth of commercial bank finance, OSV owners vate, Rhode Island Fast Ferries (RIFF), a company described building (or converting) vessels for the offshore wind trades as the parent company of Atlantic Wind Transfers, has been should look at different sources. ESG (environment, social, gov- financed by BankAmerica. BankAmerica, in a website posting, ernance) funds will invest in large projects, smaller vessels will said: “They’re a growing business at the heart of the state’s need to be a subset of a bigger transaction. The energy giants economic revival, and we work closely with them regarding have access to capital not available to small owners; consider financing needs for large capital projects, like new vessels, as Northern Offshore Services collaborating with deep-pocketed well as other banking services for their business.” This tradi- Ørsted: “…operat

Finance for the sector goes beyond purely commercial lend- to Chinese leasing company ICBC for funding two service ves- ing to vessel owners, into the realm of business synergies; sels, Windea Leibniz and Windea La Cour working in the North in the case of AWT, it benefits from existing dock facilities Sea. Such financing is enabled by the deep pockets of Siemens, leased at Quonset Point by its parent company. Synergies also taking the vessels on lengthy charters. play a role at another CTV operator, Windserv Marine, a part Rosy growth forecasts of only a few months ago notwith- of the privately held tug and barge specialist Reinauer Trans- standing, the likely economic slowdown will impact OSVs portation Corporation (which in turn is the owner of Senesco in offshore wind (as well as in the battered oil sector). Wood

Marine, with a yard located within earshot of the RIFF facil- Mackenzie wrote, in March, 2020, as the Coronavirus pandemic ity) describes itself as a full service provider “… in all stages was raging “The potential impact on global installations remains of the windfarm lifecycle…” Windserv has joined forces with most significant in China and the U.S., where wind-focused pol-

Ørsted to build two CTVs, one at a small yard in North Caro- icy deadlines were expected to deliver record volumes.” www.marinelink.com 43