Opinion: Shame on Port States for the Treatment of Seafarers

Port states benefit greatly from the vessels that call at their ports, loading and unloading cargoes with great efficiency and speed. The items manufactured in those states and sold overseas keep many of their citizens gainfully employed. The items imported supply stock for the stores of their nation and provide goods for their citizens. The physical ports utilized by the vessels are employment magnets, attracting a diverse array of industries.

Yet, when the COVID-19 pandemic struck, those port states took swift actions against the very vessels that keep their economies in operation.

They did this, not by preventing the vessels from loading and unloading cargoes, but by banning crew changes. Thus, their economies have not suffered any immediate harm. The harm has been suffered by the thousands of seafarers doomed to sail on voyages of indeterminate length. This harms the seafarers’ physical and mental health and adversely impacts their families back home.

The United States recently issued an onerous set of requirements for repatriation of foreign seafarers on cruise ships idled in U.S. waters. The process of gaining approval for repatriation is complex, paperwork-intensive, and expensive. Insofar as I can determine, only a handful of seafarers have been repatriated through this process. But at least the United States has done something.

Most other nations have done next to nothing.

The United Kingdom’s Maritime and Coastguard Agency (MCA) recently detained five cruise ships idling in its waters for failure to complete timely inspections and to fully comply with Maritime Labor Convention requirements. Surveyors also found a number of expired and invalid Seafarers Employment Agreements, late payment of wages, and seafarers who have been on board for over 12 months. The repatriation efforts have allegedly been frustrated by shifting Indian government policy regarding its permission for return of Indian seafarers. It is no wonder that some cruise lines have found it less burdensome to sail some of their vessels to ports of the nations of its crews and return them directly to homes.

While the press has devoted a fair amount of time reporting on the plight of seafarers on idled cruise ships, few are discussing the greater problem of seafarers on cargo vessels. Thousands of these seafarers are stuck in a form of indentured servitude on their ships, unable to get replacements and return home. They continue to make ports calls, loading and unloading cargoes, loading food and other necessaries, and discharging waste – but they are not allowed to go ashore. The only people that come aboard are pilots, the occasional port state inspector or surveyor, and necessary longshoremen handling cargo. Everyone maintains social distancing and many wear masks. There are no handshakes.

It could be argued that these seafarers are involuntarily being isolated from the ravages of COVID-19. They do not associate with others for weeks and sometimes months at a time. Yet, few of these seafarers have contracted COVID-19.

The toll, though, is the grind of the unending work without break. It imposes physical and mental punishments on the seafarers. As they endure this routine, their ability to safely and thoroughly perform their important tasks decreases. This puts their ships and the environment at risk.

From 27 March to 4 July 2020, the Maritime and Port Authority of Singapore has approved more than 24,000 cases of sign-on/sign-off crew changes. Unfortunately, it is the exception. Unless other port states recognize their responsibility, as pointed out by the IMO and other international agencies, as well as by maritime labor unions, the dangers to these seafarers, their ships, and the international economy will continue to grow. Shame on the port states for allowing this avoidable situation to come into existence and then fester for months. 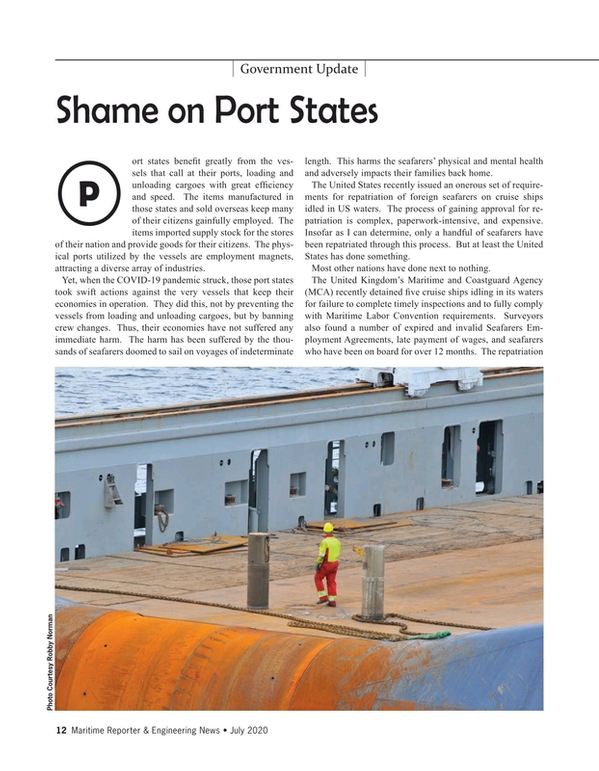 Read Opinion: Shame on Port States for the Treatment of Seafarers in Pdf, Flash or Html5 edition of July 2020 Maritime Reporter