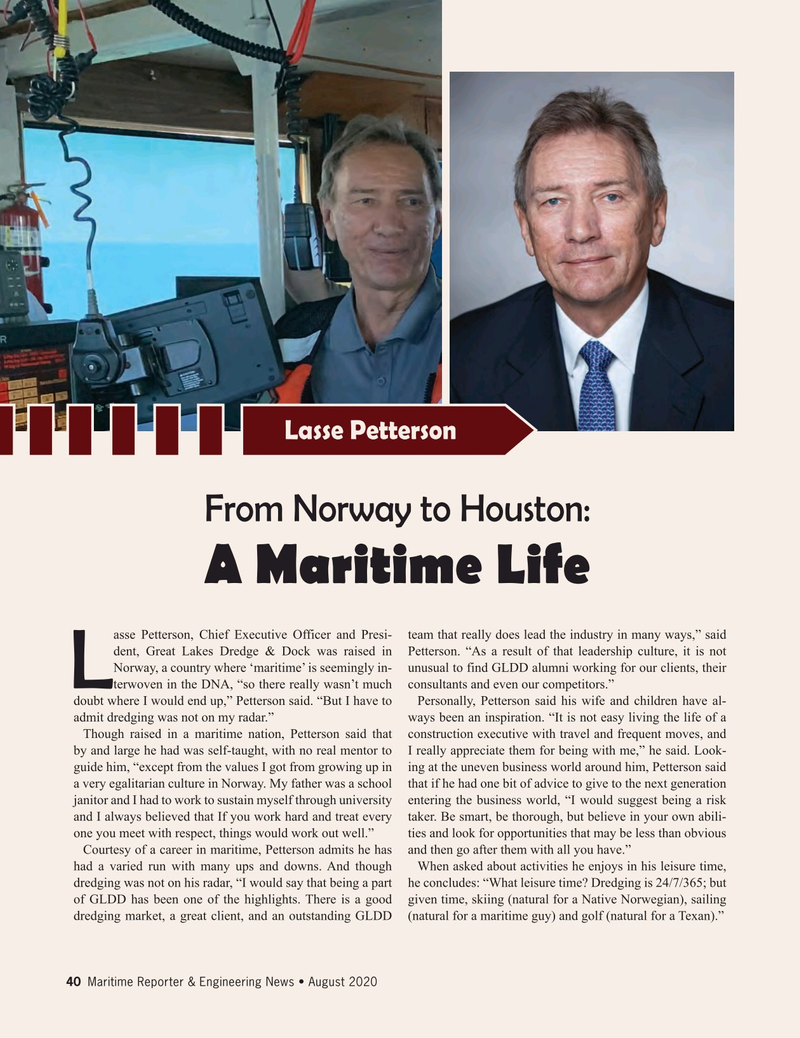 From Norway to Houston:

A Maritime Life asse Petterson, Chief Executive Officer and Presi- team that really does lead the industry in many ways,” said dent, Great Lakes Dredge & Dock was raised in Petterson. “As a result of that leadership culture, it is not

Norway, a country where ‘maritime’ is seemingly in- unusual to find GLDD alumni working for our clients, their

Lterwoven in the DNA, “so there really wasn’t much consultants and even our competitors.” doubt where I would end up,” Petterson said. “But I have to Personally, Petterson said his wife and children have al- admit dredging was not on my radar.” ways been an inspiration. “It is not easy living the life of a

Though raised in a maritime nation, Petterson said that construction executive with travel and frequent moves, and by and large he had was self-taught, with no real mentor to I really appreciate them for being with me,” he said. Look- guide him, “except from the values I got from growing up in ing at the uneven business world around him, Petterson said a very egalitarian culture in Norway. My father was a school that if he had one bit of advice to give to the next generation janitor and I had to work to sustain myself through university entering the business world, “I would suggest being a risk and I always believed that If you work hard and treat every taker. Be smart, be thorough, but believe in your own abili- one you meet with respect, things would work out well.” ties and look for opportunities that may be less than obvious

Courtesy of a career in maritime, Petterson admits he has and then go after them with all you have.” had a varied run with many ups and downs. And though When asked about activities he enjoys in his leisure time, dredging was not on his radar, “I would say that being a part he concludes: “What leisure time? Dredging is 24/7/365; but of GLDD has been one of the highlights. There is a good given time, skiing (natural for a Native Norwegian), sailing dredging market, a great client, and an outstanding GLDD (natural for a maritime guy) and golf (natural for a Texan).” 40 Maritime Reporter & Engineering News • August 2020