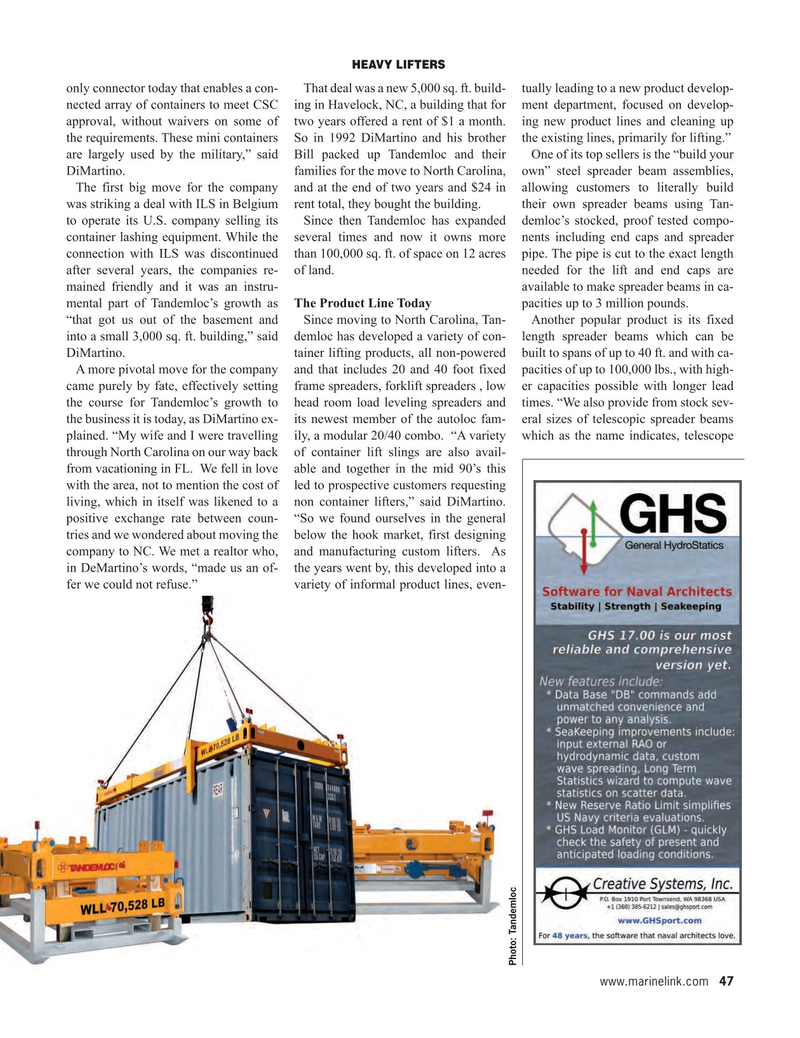 HEAVY LIFTERS only connector today that enables a con- That deal was a new 5,000 sq. ft. build- tually leading to a new product develop- nected array of containers to meet CSC ing in Havelock, NC, a building that for ment department, focused on develop- approval, without waivers on some of two years offered a rent of $1 a month. ing new product lines and cleaning up the requirements. These mini containers So in 1992 DiMartino and his brother the existing lines, primarily for lifting.” are largely used by the military,” said Bill packed up Tandemloc and their One of its top sellers is the “build your

DiMartino. families for the move to North Carolina, own” steel spreader beam assemblies,

The first big move for the company and at the end of two years and $24 in allowing customers to literally build was striking a deal with ILS in Belgium rent total, they bought the building. their own spreader beams using Tan- to operate its U.S. company selling its Since then Tandemloc has expanded demloc’s stocked, proof tested compo- container lashing equipment. While the several times and now it owns more nents including end caps and spreader connection with ILS was discontinued than 100,000 sq. ft. of space on 12 acres pipe. The pipe is cut to the exact length after several years, the companies re- of land. needed for the lift and end caps are mained friendly and it was an instru- available to make spreader beams in ca- mental part of Tandemloc’s growth as The Product Line Today pacities up to 3 million pounds. “that got us out of the basement and Since moving to North Carolina, Tan- Another popular product is its fixed into a small 3,000 sq. ft. building,” said demloc has developed a variety of con- length spreader beams which can be

DiMartino. tainer lifting products, all non-powered built to spans of up to 40 ft. and with ca-

A more pivotal move for the company and that includes 20 and 40 foot fixed pacities of up to 100,000 lbs., with high- came purely by fate, effectively setting frame spreaders, forklift spreaders , low er capacities possible with longer lead the course for Tandemloc’s growth to head room load leveling spreaders and times. “We also provide from stock sev- the business it is today, as DiMartino ex- its newest member of the autoloc fam- eral sizes of telescopic spreader beams plained. “My wife and I were travelling ily, a modular 20/40 combo. “A variety which as the name indicates, telescope through North Carolina on our way back of container lift slings are also avail- from vacationing in FL. We fell in love able and together in the mid 90’s this with the area, not to mention the cost of led to prospective customers requesting living, which in itself was likened to a non container lifters,” said DiMartino. positive exchange rate between coun- “So we found ourselves in the general tries and we wondered about moving the below the hook market, first designing company to NC. We met a realtor who, and manufacturing custom lifters. As in DeMartino’s words, “made us an of- the years went by, this developed into a fer we could not refuse.” variety of informal product lines, even-