The U.S. Navy’s controversial USS Zumwalt (DDG 1000) class of guided missile destroyers raises the legitimate question of whether a ship is too transformational, or not transformational enough.

While the Navy Fact File states that DDG 1000 is the “largest and most technologically advanced surface combatant in the world,” it’s a program that has been in existence for many years. It began as the SC-21 (Surface Combatant for the 21st century) research and development program in 1994, which included the “arsenal ship” concept. From that effort came a 16,000-ton land attack destroyer, designed to support expeditionary forces coming ashore and moving inland, emerged with two long-range guns and 128 missile tubes, called DD-21 (Destroyer for the 21st century). That program evolved into the DD(X) or Zumwalt-class guided missile destroyer, with the characteristic tumblehome hull and stealth technology to operate in littoral waters against threats of the post-Cold War world. It was then designated as DDG 1000, with the intention of evolving that hull into an air defense cruiser called CG(X). In fact, at that time, the Navy was promoting the Surface Combatant Family of Ships, or SCFOS, which included the DD(X), CG(X), a new class of ships called LCS, and the Aegis cruisers and destroyers kept in the most upgraded configurations.

While many new and transformational technologies and concepts were developed and tested for DDG-1000—to include the Advanced Gun System (AGS) and Long-Range Land Attack Projectile (LRLAP)--the original program of 32 ships did not materialize (it was reduced to 24, then 12, then seven, and eventually three), and the CG(X) concept was cancelled. DDG 1000 was built around the main battery of two 155mm AGS guns that could fire the precision-guided, rocket assisted LRLAP rounds at targets 63 to 100 miles away with pinpoint accuracy. Using the multi-round simultaneous impact (MRSI), four rounds could be fired one after the other, each one on a separate flight path calculated to arrive precisely at the same time, such that the rounds could impact a different side of a structure at exactly the same time. The fact that the rounds cost as much as a Tomahawk missile doomed this projectile, and that doomed the gun, which together necessitated a new purpose for the ship.

Because the Zumwalts have considerable power margin, they were looked at as a platform for a new rail gun. But despite a significant development investment by the Navy, there is no current rail gun production program.

The ships remain lethal with 80 peripheral vertical launch system tubes that can launch Tomahawk and other missiles, with the size margin for even bigger missiles yet to enter service. But the AGS gun mounts and associated ammunition storage and handling system, which extends several decks below the guns, will be removed. And that creates an opportunity.

That opportunity is to the make DDG 1000 a hypersonic strike missile platform. The Navy’s current plan is to replace the gun and associated equipment with the Advanced Payload Module (APM), the same one intended for the Block V Virginia-class submarines, to carry the hypersonic Conventional Prompt Strike (CPS) missile. That weapon reportedly has a 1,700-mile range and can travel at a speed greater than Mach 5.

According to the Navy, three CPS missiles can be carried in the Advanced Payload Module (APM) which will be installed in the Virginia Payload Module (VPM), this is analogous to the Multiple All-Up-Round Canisters (MACs) that normally carry seven subsonic Tomahawk land-attack cruise missiles, also installed in the VPM. Each Zumwalt-class destroyer would be capable of housing four APMs, and thus up to 12 CPS AURs could be carried in the space currently occupied by the forward AGS gun and its associated magazine equipment below decks. The option exists to do the same for the after AGS gun.

Today, USS Zumwalt (DDG 1000) and USS Michael Monsoor (DDG 1001) are in commission, while the third, the future USS Lyndon Baines Johnson (DDG 1002), is undergoing sea trials. Even though the program dates back to the 1990s, they are built on cutting-edge technology that is new to the Navy. They are assigned to Surface Development Squadron One (SURFDEVRON One), which is working with the Surface and Mine Warfare Development Center (SMWDC) on to find the best way to use the incredible capabilities possessed by these ships.

According to Capt. Jeff Heames, commander of SURFDEVRON One, DDG 1000 is an opportunity for the surface force. “We’ve been able to evolve, taking the best parts of the original design, while at the same time exploring new opportunities for the class. Installing the Conventional Prompt Strike weapon system on the Zumwalt class is one example. I believe the Zumwalt class has potential to inspire new warfighting capabilities and tactics, techniques, and procedures (TTP) for the fleet.” 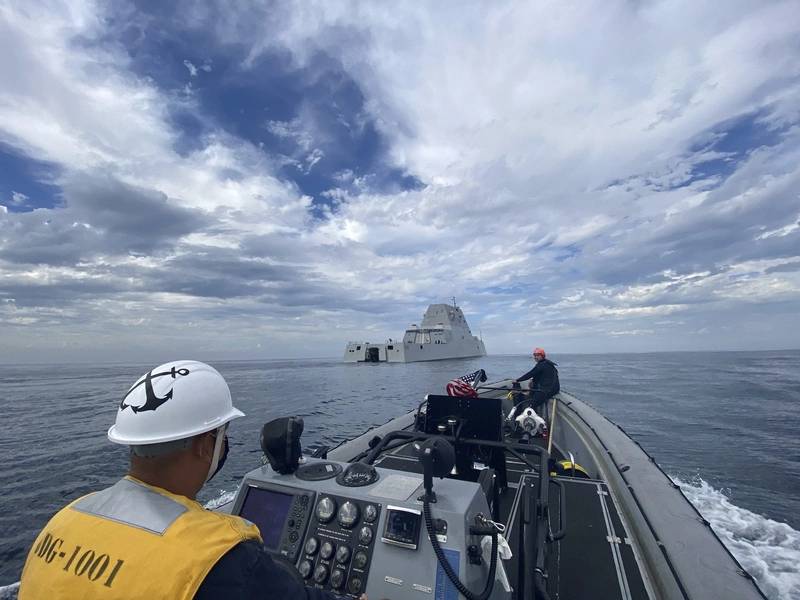 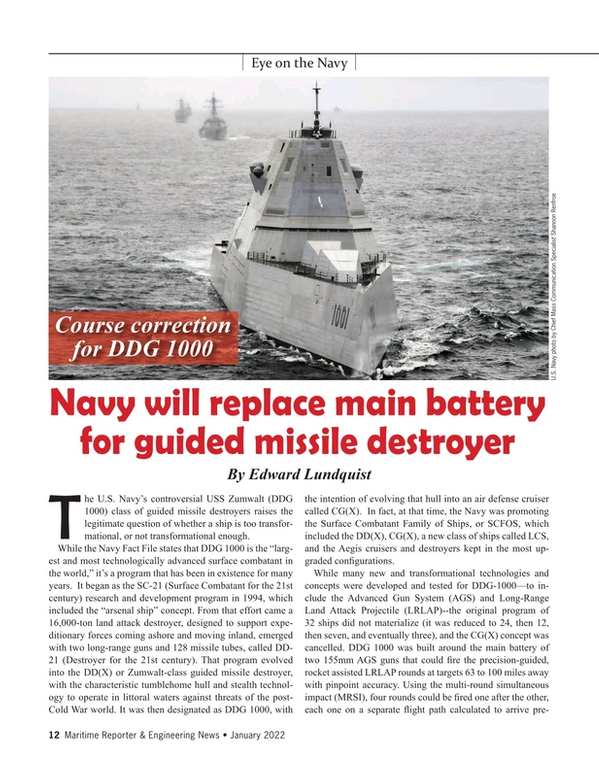 Other stories from January 2022 issue