U.S. Navy: DDG(X) is a Large Surface Combatant with Room to Grow

The U.S. Navy’s highly successful USS Arleigh Burke (DDG 51) surface combatant program is still going strong and growing in capability.  Nearly 40 years later, new ships are still being built.  But, the navy said, the ship cannot support the systems of tomorrow needed to meet the future threat.
“DDG 51 has been in production for over 40 years with basically the same hull we started with in 1985, and with and 30 years-worth of upgrades from Flight I to Flight II and IIA and now Flight III,” said Rear Adm. Paul Schlise, director for surface warfare on the Navy staff.  “This hull form is maxed out in nearly every mission area. Meanwhile, the threat marches on.”

Speaking at the Surface Navy Association’s 34th Annual Symposium. Schlise said the newest version, the Flight III, will be a quantum leap forward in the class. The first Flight III, the future USS Jack Williams (DDG 125) is nearly 75 percent complete.  It brings a new radar, electronic warfare system, Aegis Baseline 10, and a new electric plant into the Arleigh Burke hull.

“DDG 125 will be the first ship with the SPY-6, the Navy's next generation radar system that will make our ships more lethal by providing power and sensitivity for long range detection, discrimination and engagement,” said Schlise.”  “It will be the most capable and sophisticated surface combat ever built, but it also represents the bridge from the past to the future.”

Flight III will assume the air defense commander role (currently carried out by a Ticonderoga-class CG-7 guided missile cruiser), with an O-6 in command (the other DDG 51 ships have an O-5 in command, while the CG-47s are commanded by O-6s).  The first Flight III is USS Jack Lucas (DDG 125), which is being built at Huntington Ingalls shipyard in Pascagoula, Miss., and is expected to go to sea later this year.

By comparison, the original Flight I DDGs displaces about 8,300 tons, while the Flight III will be close to 10,200 tons.  The DDG 51 program over the year has consumed all of the available space, weight and power margin.  Due to the density of the DDG 51 design, the cascading effect of design changes to accommodate new capabilities impacts large portions of the ship, increases costs and takes a long time to upgrade.  So, after 40 years, the Navy is beginning the DDG(X) program, formerly known as the large surface combatant (LSC). DDG(X) will have a new hull design, will be bigger than DDG 51s, and will have more power, with the for more and bigger missiles  and the flexibility to support power hungry weapons such as lasers and rail guns.
Pace the threat

“DDG 51 is the most successful combatant class that we have in production. It's been going on since 1985. There are a lot of lessons learned from there, a lot of goodness that we're trying to incorporate in this program,” said Katie Connelly, the deputy program manager for the DDG X program office.  “The Flight III combat capability upgrade provides the best integrated air and missile defense capability that we have , and will enable us to continue the fight for the near term, and pace the threat as we go.” 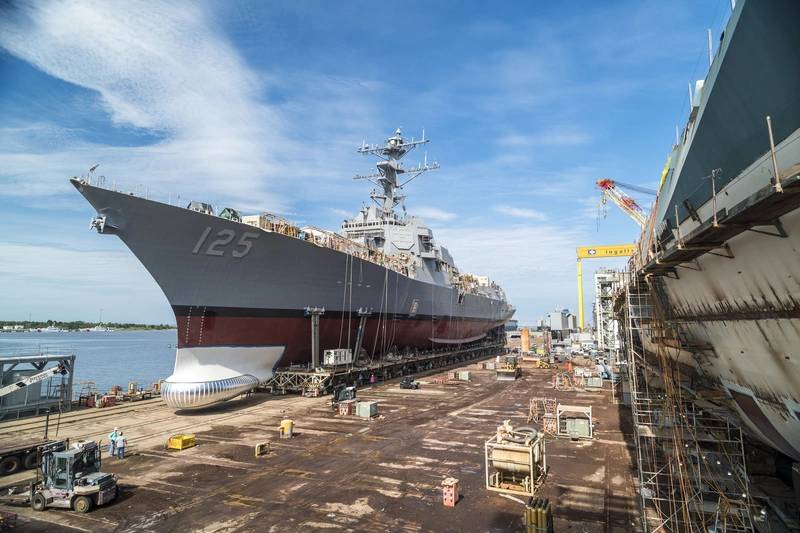 Based on typical service life expectancies, DDG 51 Flight III will be in service in the fleet into the 2060s. “But,” Connelly said,  “We took up all of the service life allowance on that platform.  All of the space, weight and power has been allocated; there is not enough room on that ship to put a new combat capability that takes more power or a larger footprint within the ship,” she said.  “The threat will continue to evolve, and there will be new threats as well. As the Navy continues to evolve its combat systems, weapons and other technologies to deter the threat, it needs a new platform that can accommodate those new technologies. We need to upgrade to a new hull form--hence DDG(X).”The first ship will deliver with the new hull; the Flight III combat system; two RAM launchers and IPS.

Like the FFG 62 program, the Navy wants to avoid revolutionary technologies for the basic hull, mechanical, electrical and combat systems (having learned lessons from the DDG-1000 program, which was to be 32 ships but was truncated to three because of cost and technology issues).  The Navy is reducing program risk by taking an evolutionary approach as opposed to a revolutionary approach, gaining benefits from existing systems on the Flight III and those that that are common in the fleet, including RAM launchers for improved self-defense.

“The first ship will minimize incorporation of new technologies,” Connelly said.  “When new technologies are fully mature and ready to actually be implemented, we will put them on the ship, but not until then.  We are trying to reduce risk as much as possible.”

Potential upgrades in the future include lasers; larger array; an upgraded X-band radar additional VLS cells; large missile launchers; and well as also potentially an integrated power and energy system versus the IPS.

The ship is being designed accommodate a destroyer payload module, which would be plugged into the ship during construction to increase the size and available space for new systems or capability.  This is similar to the Virginia Payload Modules being inserted in new-generation Virginia Class attach submarines that significantly increase the number of weapons that can be carried.

Congress is requiring the Navy to conduct significant land-based testing for new platforms and their critical systems, which applies to DDG(X) and its hull form and IPS.  Hull form model testing is being conducted at Naval Surface Warfare Center Carderock.

Connelly said the Navy is working with Huntington Ingalls Shipbuilding and General Dynamics Bath Iron Works to ensure a thoughtful and smooth transition from the DDG 51 production line to the new DDG(X).

SPY-6 is the U.S. Navy’s new and missile defense radar for the DDG 51 Flight III and DDG(X), as well as other surface warships. (Raytheon photo)

The Navy is seeking commonality among its various combat systems in the fleet.  The Navy is necking down the variations of combat systems on its warships into what they call the Integrated Combat System, or ICS, integrating sensors and both hard and soft kill weapons into a common system, which will tie all the platforms together.  ICS brings the Lockheed Aegis system on combatants and the Raytheon Ship Self-Defense System on carriers and amphibious ships, as well as the and the Combatts 21 and TACTICOS systems on the littoral combat ships,  into a new system based on the Aegis Common Source Library (CSL) and combat system, the scalable SPY 6 radar and SEWIP Block 3. The new Block 3 version of the Surface Electronic Warfare Improvement Program (SEWIP) provides upgraded electronic warfare (EW) detection and countermeasures system based on the AN/SLQ-32.  The SEWIP Block 3 system is a next chapter in the SLQ-32 family, and will be installed on Flight III and backfit onto the Flight IIAs, to fight threat with a virtually unlimited electronic attack magazine.

According to the Chief of Naval Operations Nav Plan of January 2021, the Navy Operational Architecture (NOA) is designed to “close the kill chain faster than our rivals with a resilient web of persistent sensors, command and control nodes, platforms, and weapons.”  The  NOA leads to the Integrated Combat System (ICS), which will “connect sensors, networks, and weapons across a distributed naval force afloat and ashore.  In turn, ICS is enabled by the AEGIS Common Source Library (CSL), which “enables baseline consolidation and will form the software foundation for the future.”

While Navy leadership is solidly supporting DDG(X), there may be a need to keep the DDG-51 production line going.  Speaking at a U.S. Navy Memorial SITREP presentation on Jan 18, Secretary Carlos Del Toro said there is a valid need for more combat power at sea today.  “Perhaps a better strategy might be to build a few more DDG Flight IIIs to ensure that we have the capacity necessary to deter China and do the other things that we need to do,” before the DDG(X)s are delivered.

Congress may agree. The Senate Armed Services Committee said in a report accompanying the National Defense Authorization Act for Fiscal Year 2022 that the DDG-51 destroyers are the backbone of the surface fleet, providing multi-mission flexibility and increasing capability with introduction of Flight III and the AN/SPY-6 radar. “With plans for construction of a new class of Large Surface Combatants (LSCs) toward the end of this decade and the current multi-year procurement of DDG-51s ending in fiscal year 2022, the committee believes that it is imperative that the Navy award another DDG-51 multi-year contract beginning in fiscal year 2023. This contract is critical to ensuring that Flight III capability continues to be delivered to the fleet and the industrial base is maintained to support the LSC acquisition strategy.”

“Flight III will be an exceptional platform throughout its service life,” said Schlise.  “There's no doubt in my mind DDG(X) is required, and will be the next enduring large surface combatant. The Flight III is a fantastic capability, but we need to look to the future.”

The first ship in the class, USS Arleigh Burke (DDG 51), was commissioned in 1991.  It is currently modernized with the lasted combat system and is forward deployed.  The 20 Flight I ships were followed by seven Flight IIs with improved systems.  The Flight IIA was lengthened to incorporate a helicopter hanger for two aircraft.  33 Flight IIAs were built before production ended.  The Arleigh Burke production was restarted, with 15 new Flight IIAs ordered, some of them with new technology insertion to smooth the transition to the Flight IIIs. Fourteen Flight IIIs are being built or approved for construction. 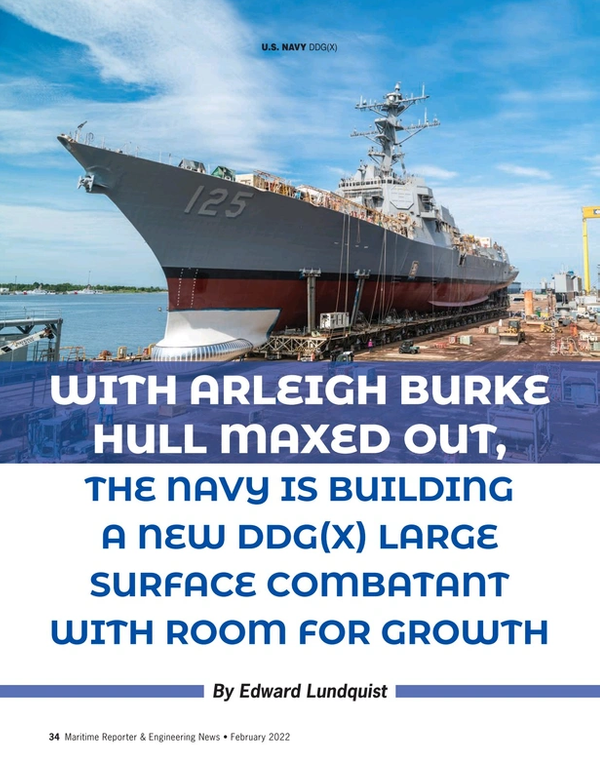 Read U.S. Navy: DDG(X) is a Large Surface Combatant with Room to Grow in Pdf, Flash or Html5 edition of February 2022 Maritime Reporter

Other stories from February 2022 issue