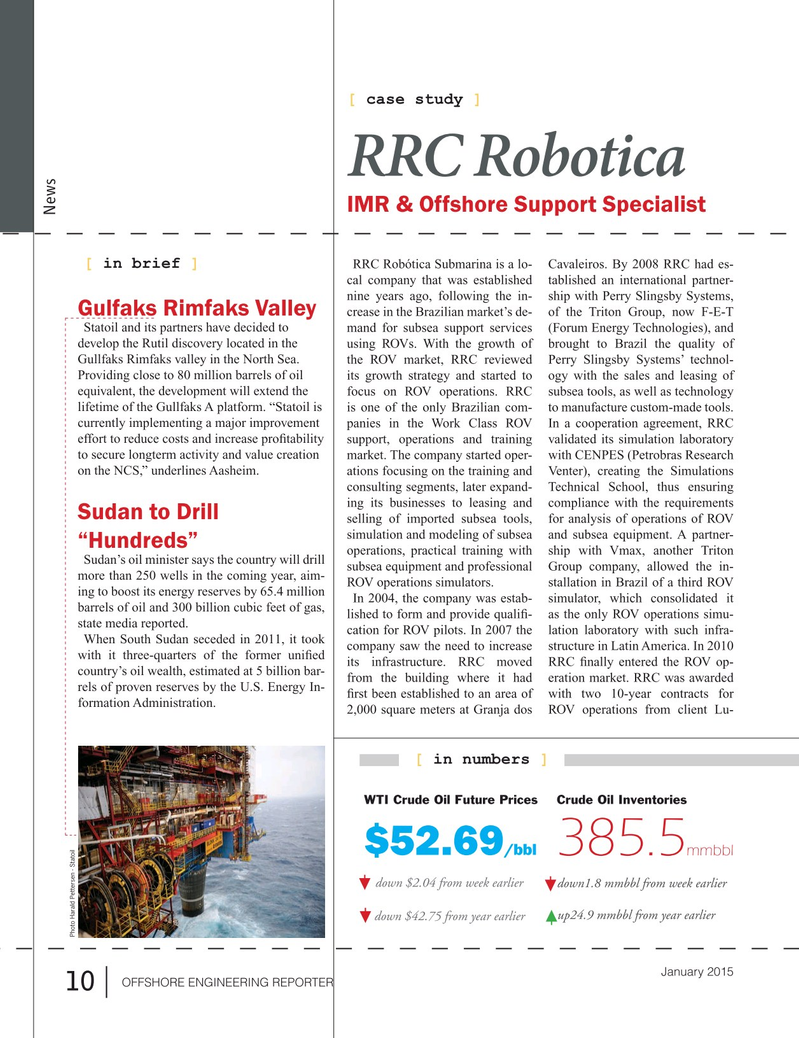 RRC Robótica Submarina is a lo- Cavaleiros. By 2008 RRC had es- cal company that was established tablished an international partner- nine years ago, following the in- ship with Perry Slingsby Systems,

Statoil and its partners have decided to mand for subsea support services (Forum Energy Technologies), and develop the Rutil discovery located in the using ROVs. With the growth of brought to Brazil the quality of

Providing close to 80 million barrels of oil its growth strategy and started to ogy with the sales and leasing of equivalent, the development will extend the focus on ROV operations. RRC subsea tools, as well as technology lifetime of the Gullfaks A platform. “Statoil is is one of the only Brazilian com- to manufacture custom-made tools. currently implementing a major improvement panies in the Work Class ROV In a cooperation agreement, RRC effort to reduce costs and increase proftability support, operations and training validated its simulation laboratory to secure longterm activity and value creation market. The company started oper- with CENPES (Petrobras Research on the NCS,” underlines Aasheim. ations focusing on the training and Venter), creating the Simulations consulting segments, later expand- Technical School, thus ensuring ing its businesses to leasing and compliance with the requirements

Sudan to Drill selling of imported subsea tools, for analysis of operations of ROV simulation and modeling of subsea and subsea equipment. A partner- “Hundreds” operations, practical training with ship with Vmax, another Triton

Sudan’s oil minister says the country will drill subsea equipment and professional Group company, allowed the in- more than 250 wells in the coming year, aim-

ROV operations simulators. stallation in Brazil of a third ROV ing to boost its energy reserves by 65.4 million

In 2004, the company was estab- simulator, which consolidated it barrels of oil and 300 billion cubic feet of gas, lished to form and provide qualif- as the only ROV operations simu- state media reported.

cation for ROV pilots. In 2007 the lation laboratory with such infra-

When South Sudan seceded in 2011, it took company saw the need to increase structure in Latin America. In 2010 with it three-quarters of the former unifed its infrastructure. RRC moved RRC fnally entered the ROV op- country’s oil wealth, estimated at 5 billion bar- from the building where it had eration market. RRC was awarded rels of proven reserves by the U.S. Energy In- frst been established to an area of with two 10-year contracts for formation Administration.