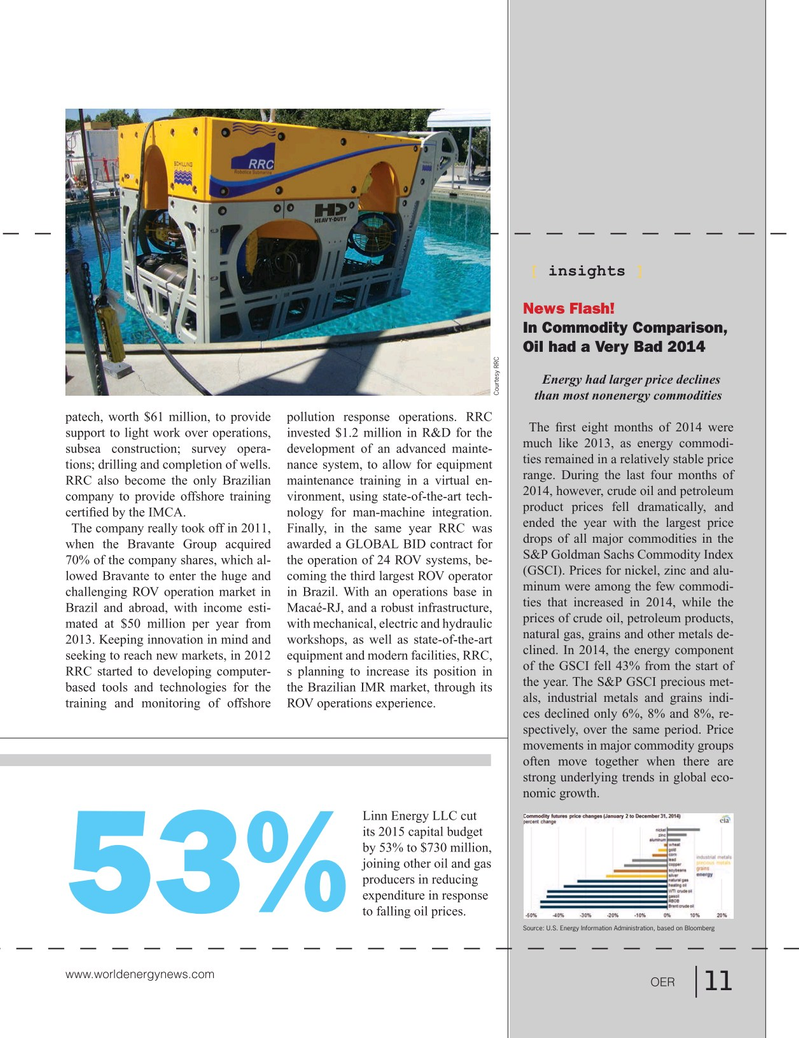 The frst eight months of 2014 were support to light work over operations, invested $1.2 million in R&D for the much like 2013, as energy commodi- subsea construction; survey opera- development of an advanced mainte- ties remained in a relatively stable price tions; drilling and completion of wells. nance system, to allow for equipment range. During the last four months of

RRC also become the only Brazilian maintenance training in a virtual en- 2014, however, crude oil and petroleum company to provide offshore training vironment, using state-of-the-art tech- product prices fell dramatically, and certifed by the IMCA. nology for man-machine integration. ended the year with the largest price

The company really took off in 2011, Finally, in the same year RRC was drops of all major commodities in the when the Bravante Group acquired awarded a GLOBAL BID contract for

S&P Goldman Sachs Commodity Index 70% of the company shares, which al- the operation of 24 ROV systems, be- (GSCI). Prices for nickel, zinc and alu- lowed Bravante to enter the huge and coming the third largest ROV operator minum were among the few commodi- challenging ROV operation market in in Brazil. With an operations base in ties that increased in 2014, while the

Brazil and abroad, with income esti- Macaé-RJ, and a robust infrastructure, prices of crude oil, petroleum products, mated at $50 million per year from with mechanical, electric and hydraulic natural gas, grains and other metals de- 2013. Keeping innovation in mind and workshops, as well as state-of-the-art clined. In 2014, the energy component seeking to reach new markets, in 2012 equipment and modern facilities, RRC, of the GSCI fell 43% from the start of

RRC started to developing computer- s planning to increase its position in the year. The S&P GSCI precious met- based tools and technologies for the the Brazilian IMR market, through its als, industrial metals and grains indi- training and monitoring of offshore ROV operations experience.

ces declined only 6%, 8% and 8%, re- spectively, over the same period. Price movements in major commodity groups often move together when there are strong underlying trends in global eco- nomic growth.

Linn Energy LLC cut its 2015 capital budget by 53% to $730 million, joining other oil and gas producers in reducing expenditure in response 53% to falling oil prices.