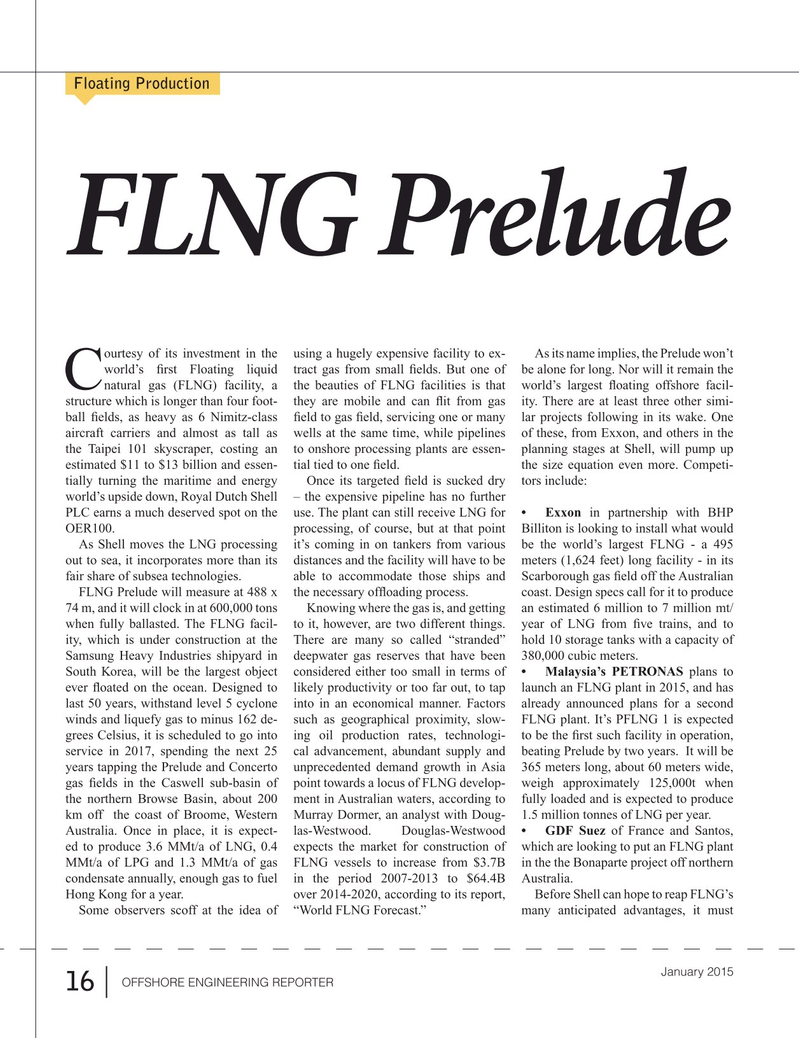 FLNG Prelude ourtesy of its investment in the using a hugely expensive facility to ex- As its name implies, the Prelude won’t world’s frst Floating liquid tract gas from small felds. But one of be alone for long. Nor will it remain the

Cnatural gas (FLNG) facility, a the beauties of FLNG facilities is that world’s largest foating offshore facil- structure which is longer than four foot- they are mobile and can fit from gas ity. There are at least three other simi- ball felds, as heavy as 6 Nimitz-class feld to gas feld, servicing one or many lar projects following in its wake. One aircraft carriers and almost as tall as wells at the same time, while pipelines of these, from Exxon, and others in the the Taipei 101 skyscraper, costing an to onshore processing plants are essen- planning stages at Shell, will pump up estimated $11 to $13 billion and essen- tial tied to one feld. the size equation even more. Competi- tially turning the maritime and energy Once its targeted feld is sucked dry tors include: world’s upside down, Royal Dutch Shell – the expensive pipeline has no further

PLC earns a much deserved spot on the use. The plant can still receive LNG for • Exxon in partnership with BHP

OER100. processing, of course, but at that point Billiton is looking to install what would

As Shell moves the LNG processing it’s coming in on tankers from various be the world’s largest FLNG - a 495 out to sea, it incorporates more than its distances and the facility will have to be meters (1,624 feet) long facility - in its fair share of subsea technologies. able to accommodate those ships and Scarborough gas feld off the Australian

FLNG Prelude will measure at 488 x the necessary offoading process. coast. Design specs call for it to produce 74 m, and it will clock in at 600,000 tons Knowing where the gas is, and getting an estimated 6 million to 7 million mt/ when fully ballasted. The FLNG facil- to it, however, are two different things. year of LNG from fve trains, and to ity, which is under construction at the There are many so called “stranded” hold 10 storage tanks with a capacity of

Samsung Heavy Industries shipyard in deepwater gas reserves that have been 380,000 cubic meters.

South Korea, will be the largest object considered either too small in terms of • Malaysia’s PETRONAS plans to ever foated on the ocean. Designed to likely productivity or too far out, to tap launch an FLNG plant in 2015, and has last 50 years, withstand level 5 cyclone into in an economical manner. Factors already announced plans for a second winds and liquefy gas to minus 162 de- such as geographical proximity, slow- FLNG plant. It’s PFLNG 1 is expected grees Celsius, it is scheduled to go into ing oil production rates, technologi- to be the frst such facility in operation, service in 2017, spending the next 25 cal advancement, abundant supply and beating Prelude by two years. It will be years tapping the Prelude and Concerto unprecedented demand growth in Asia 365 meters long, about 60 meters wide, gas felds in the Caswell sub-basin of point towards a locus of FLNG develop- weigh approximately 125,000t when the northern Browse Basin, about 200 ment in Australian waters, according to fully loaded and is expected to produce km off the coast of Broome, Western Murray Dormer, an analyst with Doug- 1.5 million tonnes of LNG per year.

Australia. Once in place, it is expect- las-Westwood. Douglas-Westwood • GDF Suez of France and Santos, ed to produce 3.6 MMt/a of LNG, 0.4 expects the market for construction of which are looking to put an FLNG plant

MMt/a of LPG and 1.3 MMt/a of gas FLNG vessels to increase from $3.7B in the the Bonaparte project off northern condensate annually, enough gas to fuel in the period 2007-2013 to $64.4B Australia.

Some observers scoff at the idea of “World FLNG Forecast.” many anticipated advantages, it must