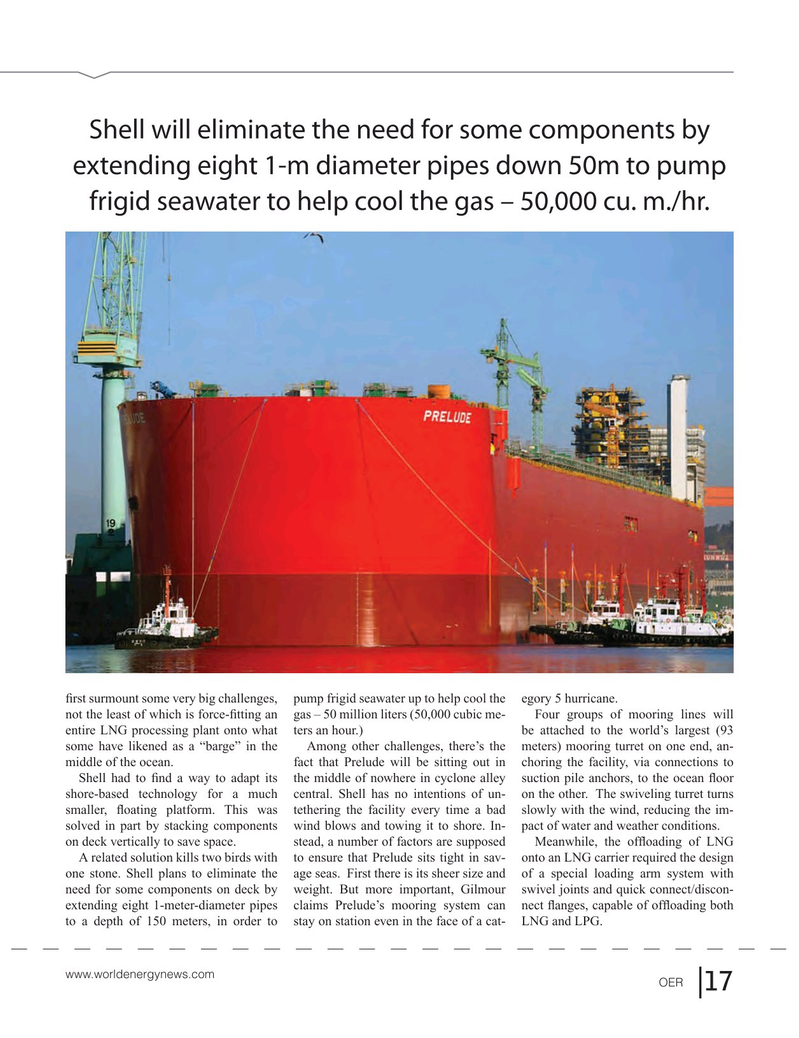 Shell will eliminate the need for some components by extending eight 1-m diameter pipes down 50m to pump frigid seawater to help cool the gas – 50,000 cu. m./hr. frst surmount some very big challenges, pump frigid seawater up to help cool the egory 5 hurricane. not the least of which is force-ftting an gas – 50 million liters (50,000 cubic me- Four groups of mooring lines will entire LNG processing plant onto what ters an hour.) be attached to the world’s largest (93 some have likened as a “barge” in the Among other challenges, there’s the meters) mooring turret on one end, an- middle of the ocean. fact that Prelude will be sitting out in choring the facility, via connections to

Shell had to fnd a way to adapt its the middle of nowhere in cyclone alley suction pile anchors, to the ocean foor shore-based technology for a much central. Shell has no intentions of un- on the other. The swiveling turret turns smaller, foating platform. This was tethering the facility every time a bad slowly with the wind, reducing the im- solved in part by stacking components wind blows and towing it to shore. In- pact of water and weather conditions. on deck vertically to save space. stead, a number of factors are supposed Meanwhile, the offoading of LNG

A related solution kills two birds with to ensure that Prelude sits tight in sav- onto an LNG carrier required the design one stone. Shell plans to eliminate the age seas. First there is its sheer size and of a special loading arm system with need for some components on deck by weight. But more important, Gilmour swivel joints and quick connect/discon- extending eight 1-meter-diameter pipes claims Prelude’s mooring system can nect fanges, capable of offoading both to a depth of 150 meters, in order to stay on station even in the face of a cat- LNG and LPG. www.worldenergynews.com