Read this page in Pdf, Flash or Html5 edition of May 2015 Marine Technology Magazine 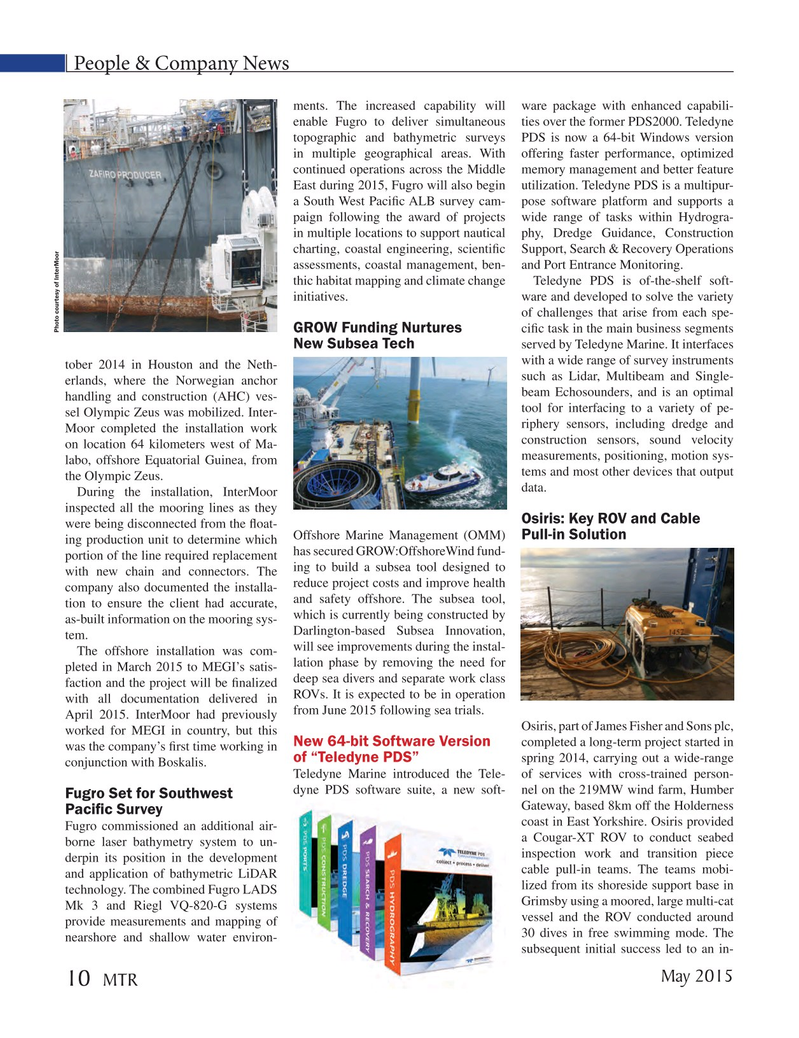 New Subsea Tech served by Teledyne Marine. It interfaces with a wide range of survey instruments tober 2014 in Houston and the Neth- such as Lidar, Multibeam and Single- erlands, where the Norwegian anchor beam Echosounders, and is an optimal handling and construction (AHC) ves- tool for interfacing to a variety of pe- sel Olympic Zeus was mobilized. Inter- riphery sensors, including dredge and

During the installation, InterMoor inspected all the mooring lines as they

Osiris: Key ROV and Cable were being disconnected from the ? oat-

Pull-in Solution ing production unit to determine which Offshore Marine Management (OMM) portion of the line required replacement has secured GROW:OffshoreWind fund- with new chain and connectors. The ing to build a subsea tool designed to reduce project costs and improve health company also documented the installa- tion to ensure the client had accurate, and safety offshore. The subsea tool, which is currently being constructed by as-built information on the mooring sys-

Darlington-based Subsea Innovation, tem. will see improvements during the instal-

The offshore installation was com- lation phase by removing the need for pleted in March 2015 to MEGI’s satis- faction and the project will be ? nalized deep sea divers and separate work class with all documentation delivered in ROVs. It is expected to be in operation

Osiris, part of James Fisher and Sons plc, worked for MEGI in country, but this

New 64-bit Software Version completed a long-term project started in was the company’s ? rst time working in of “Teledyne PDS” spring 2014, carrying out a wide-range conjunction with Boskalis.

Gateway, based 8km off the Holderness

Fugro commissioned an additional air- a Cougar-XT ROV to conduct seabed borne laser bathymetry system to un- inspection work and transition piece derpin its position in the development cable pull-in teams. The teams mobi- and application of bathymetric LiDAR lized from its shoreside support base in technology. The combined Fugro LADS

Mk 3 and Riegl VQ-820-G systems vessel and the ROV conducted around provide measurements and mapping of 30 dives in free swimming mode. The nearshore and shallow water environ- subsequent initial success led to an in-