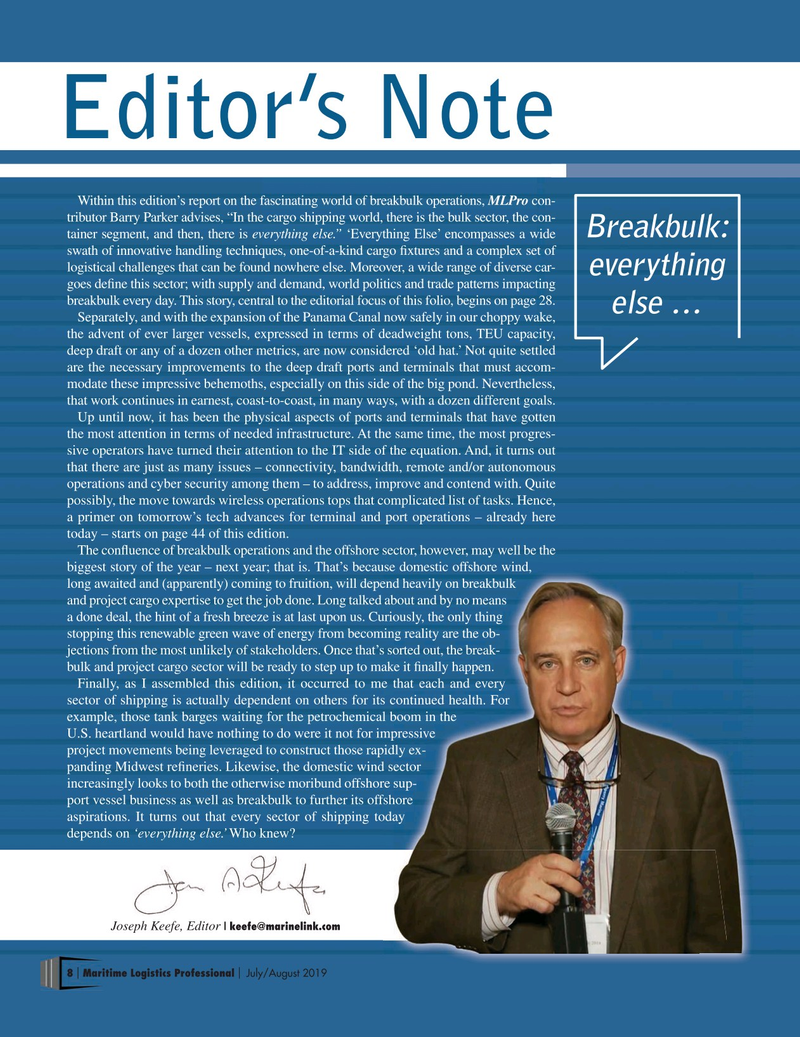 Within this edition’s report on the fascinating world of breakbulk operations, MLPro con- tributor Barry Parker advises, “In the cargo shipping world, there is the bulk sector, the con-

Breakbulk: tainer segment, and then, there is everything else.” ‘Everything Else’ encompasses a wide swath of innovative handling techniques, one-of-a-kind cargo ? xtures and a complex set of logistical challenges that can be found nowhere else. Moreover, a wide range of diverse car- everything goes de? ne this sector; with supply and demand, world politics and trade patterns impacting breakbulk every day. This story, central to the editorial focus of this folio, begins on page 28.

Separately, and with the expansion of the Panama Canal now safely in our choppy wake, the advent of ever larger vessels, expressed in terms of deadweight tons, TEU capacity, deep draft or any of a dozen other metrics, are now considered ‘old hat.’ Not quite settled are the necessary improvements to the deep draft ports and terminals that must accom- modate these impressive behemoths, especially on this side of the big pond. Nevertheless, that work continues in earnest, coast-to-coast, in many ways, with a dozen different goals.

Up until now, it has been the physical aspects of ports and terminals that have gotten the most attention in terms of needed infrastructure. At the same time, the most progres- sive operators have turned their attention to the IT side of the equation. And, it turns out that there are just as many issues – connectivity, bandwidth, remote and/or autonomous operations and cyber security among them – to address, improve and contend with. Quite possibly, the move towards wireless operations tops that complicated list of tasks. Hence, a primer on tomorrow’s tech advances for terminal and port operations – already here today – starts on page 44 of this edition.

The con? uence of breakbulk operations and the offshore sector, however, may well be the biggest story of the year – next year; that is. That’s because domestic offshore wind, use domestic offshore wind, long awaited and (apparently) coming to fruition, will depend heavily on breakbulk end heavily on breakbulk d heavily on breakbulk ab bout and by no means and project cargo expertise to get the job done. Long talked about and by no means a done deal, the hint of a fresh breeze is at last upon us. Curiously, the only thing urio ously, the only thing h b litt stopping this renewable green wave of energy from becoming reality are the ob-min ing reality are the ob- jections from the most unlikely of stakeholders. Once that’s sorted out, the break-s so orted out, the break- bulk and project cargo sector will be ready to step up to make it ? nally happen.ake e it ? nally happen.

U.S. heartland would have nothing to do were it not for impressive mp pressive project movements being leveraged to construct those rapidly ex-pid dly ex- panding Midwest re? neries. Likewise, the domestic wind sector d se ector increasingly looks to both the otherwise moribund offshore sup-re s sup- port vessel business as well as breakbulk to further its offshore fsh hore aspirations. It turns out that every sector of shipping today oda ay depends on ‘everything else.’ Who knew?