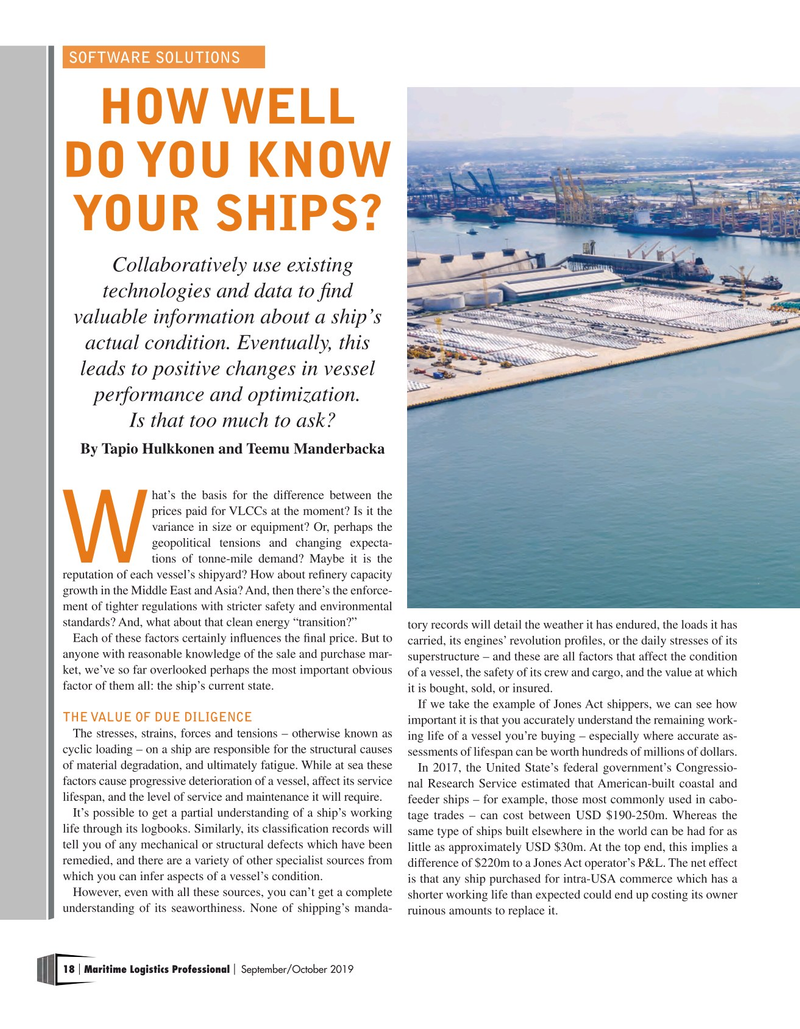 Collaboratively use existing technologies and data to fnd valuable information about a ship’s actual condition. Eventually, this leads to positive changes in vessel performance and optimization.

Is that too much to ask?

By Tapio Hulkkonen and Teemu Manderbacka hat’s the basis for the difference between the prices paid for VLCCs at the moment? Is it the variance in size or equipment? Or, perhaps the geopolitical tensions and changing expecta-

Wtions of tonne-mile demand? Maybe it is the reputation of each vessel’s shipyard? How about refnery capacity growth in the Middle East and Asia? And, then there’s the enforce- ment of tighter regulations with stricter safety and environmental standards? And, what about that clean energy “transition?” tory records will detail the weather it has endured, the loads it has

Each of these factors certainly infuences the fnal price. But to carried, its engines’ revolution profles, or the daily stresses of its anyone with reasonable knowledge of the sale and purchase mar- superstructure – and these are all factors that affect the condition ket, we’ve so far overlooked perhaps the most important obvious of a vessel, the safety of its crew and cargo, and the value at which factor of them all: the ship’s current state.

it is bought, sold, or insured.

If we take the example of Jones Act shippers, we can see how

The stresses, strains, forces and tensions – otherwise known as ing life of a vessel you’re buying – especially where accurate as- cyclic loading – on a ship are responsible for the structural causes sessments of lifespan can be worth hundreds of millions of dollars. of material degradation, and ultimately fatigue. While at sea these

In 2017, the United State’s federal government’s Congressio- factors cause progressive deterioration of a vessel, affect its service nal Research Service estimated that American-built coastal and lifespan, and the level of service and maintenance it will require. feeder ships – for example, those most commonly used in cabo-

It’s possible to get a partial understanding of a ship’s working tage trades – can cost between USD $190-250m. Whereas the life through its logbooks. Similarly, its classifcation records will same type of ships built elsewhere in the world can be had for as tell you of any mechanical or structural defects which have been little as approximately USD $30m. At the top end, this implies a remedied, and there are a variety of other specialist sources from difference of $220m to a Jones Act operator’s P&L. The net effect which you can infer aspects of a vessel’s condition.

However, even with all these sources, you can’t get a complete shorter working life than expected could end up costing its owner understanding of its seaworthiness. None of shipping’s manda- ruinous amounts to replace it.