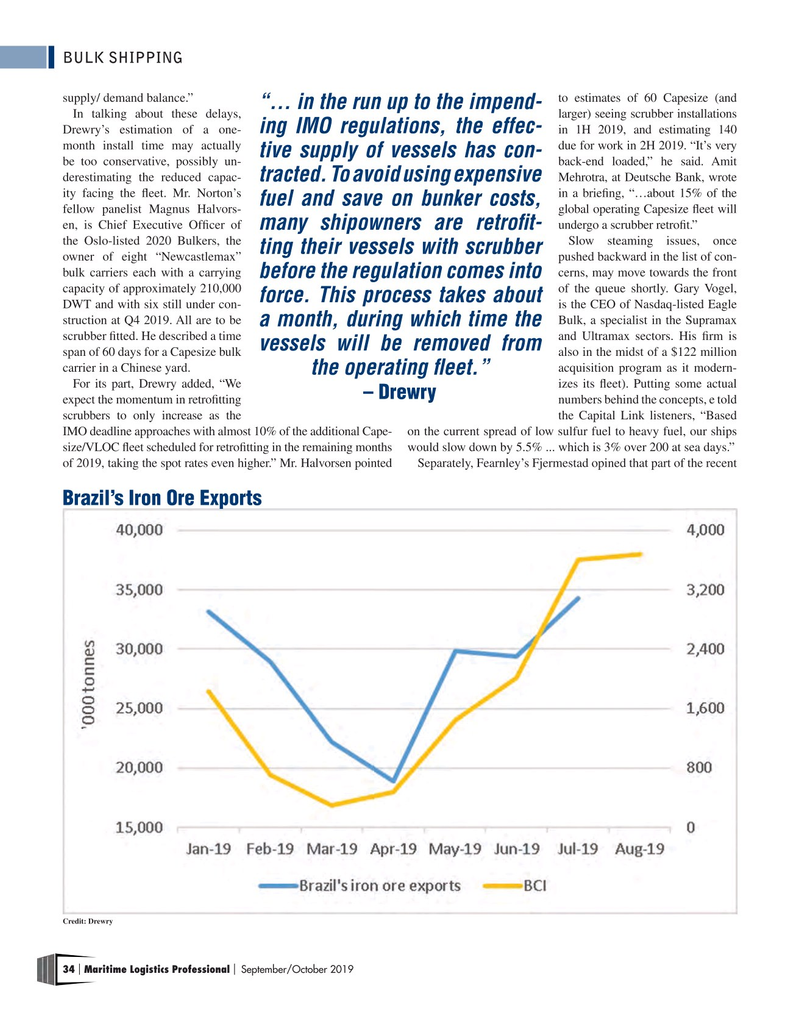 BULK SHIPPING supply/ demand balance.” to estimates of 60 Capesize (and “… in the run up to the impend-

Drewry’s estimation of a one- in 1H 2019, and estimating 140 month install time may actually due for work in 2H 2019. “It’s very tive supply of vessels has con- be too conservative, possibly un- back-end loaded,” he said. Amit derestimating the reduced capac- Mehrotra, at Deutsche Bank, wrote tracted. To avoid using expensive ity facing the feet. Mr. Norton’s in a briefng, “…about 15% of the fuel and save on bunker costs, fellow panelist Magnus Halvors- global operating Capesize feet will en, is Chief Executive Offcer of undergo a scrubber retroft.” many shipowners are retroft- the Oslo-listed 2020 Bulkers, the Slow steaming issues, once ting their vessels with scrubber owner of eight “Newcastlemax” pushed backward in the list of con- bulk carriers each with a carrying cerns, may move towards the front before the regulation comes into capacity of approximately 210,000 of the queue shortly. Gary Vogel, force. This process takes about

DWT and with six still under con- is the CEO of Nasdaq-listed Eagle struction at Q4 2019. All are to be Bulk, a specialist in the Supramax a month, during which time the scrubber ftted. He described a time and Ultramax sectors. His frm is vessels will be removed from span of 60 days for a Capesize bulk also in the midst of a $122 million carrier in a Chinese yard. acquisition program as it modern- the operating feet.”

For its part, Drewry added, “We izes its feet). Putting some actual – Drewry expect the momentum in retroftting numbers behind the concepts, e told scrubbers to only increase as the the Capital Link listeners, “Based

IMO deadline approaches with almost 10% of the additional Cape- on the current spread of low sulfur fuel to heavy fuel, our ships size/VLOC feet scheduled for retroftting in the remaining months would slow down by 5.5% ... which is 3% over 200 at sea days.” of 2019, taking the spot rates even higher.” Mr. Halvorsen pointed Separately, Fearnley’s Fjermestad opined that part of the recent