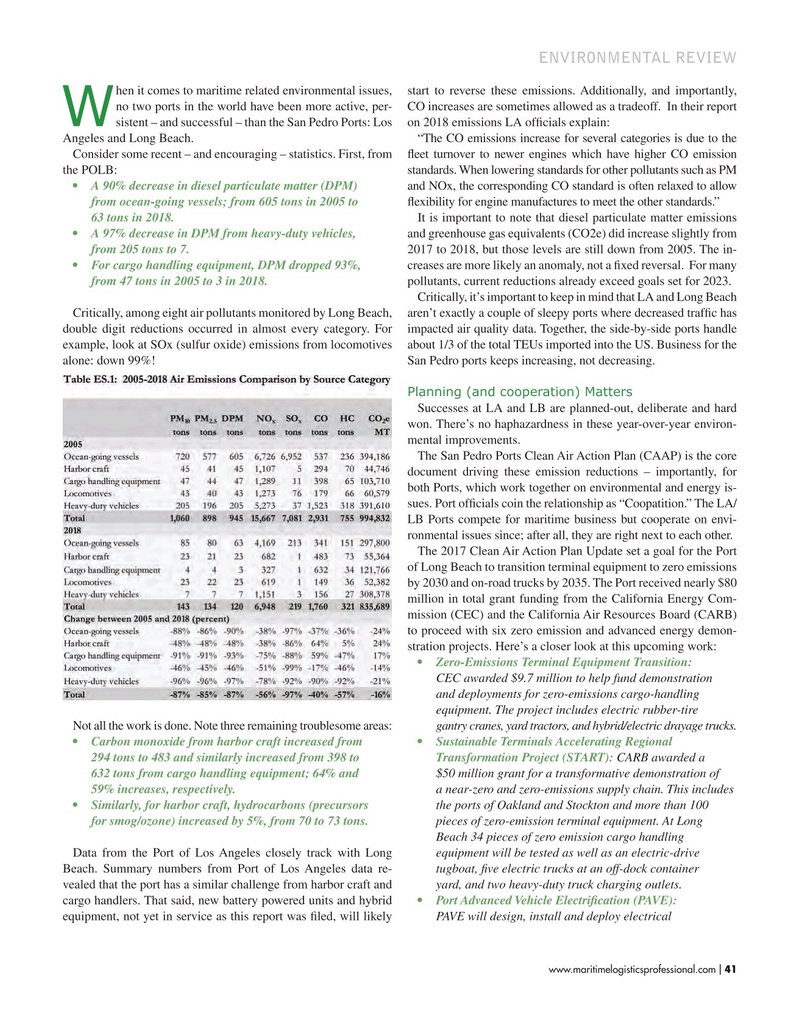 ENVIRONMENTAL REVIEW hen it comes to maritime related environmental issues, start to reverse these emissions. Additionally, and importantly, no two ports in the world have been more active, per- CO increases are sometimes allowed as a tradeoff. In their report

Angeles and Long Beach. “The CO emissions increase for several categories is due to the

Consider some recent – and encouraging – statistics. First, from feet turnover to newer engines which have higher CO emission the POLB: standards. When lowering standards for other pollutants such as PM • A 90% decrease in diesel particulate matter (DPM) and NOx, the corresponding CO standard is often relaxed to allow from ocean-going vessels; from 605 tons in 2005 to fexibility for engine manufactures to meet the other standards.” 63 tons in 2018. It is important to note that diesel particulate matter emissions • A 97% decrease in DPM from heavy-duty vehicles, and greenhouse gas equivalents (CO2e) did increase slightly from from 205 tons to 7. 2017 to 2018, but those levels are still down from 2005. The in- • For cargo handling equipment, DPM dropped 93%, creases are more likely an anomaly, not a fxed reversal. For many from 47 tons in 2005 to 3 in 2018. pollutants, current reductions already exceed goals set for 2023.

Critically, it’s important to keep in mind that LA and Long Beach

Critically, among eight air pollutants monitored by Long Beach, aren’t exactly a couple of sleepy ports where decreased traffc has double digit reductions occurred in almost every category. For impacted air quality data. Together, the side-by-side ports handle example, look at SOx (sulfur oxide) emissions from locomotives about 1/3 of the total TEUs imported into the US. Business for the alone: down 99%! San Pedro ports keeps increasing, not decreasing.

Successes at LA and LB are planned-out, deliberate and hard won. There’s no haphazardness in these year-over-year environ- mental improvements.

The San Pedro Ports Clean Air Action Plan (CAAP) is the core document driving these emission reductions – importantly, for both Ports, which work together on environmental and energy is- sues. Port offcials coin the relationship as “Coopatition.” The LA/

LB Ports compete for maritime business but cooperate on envi- ronmental issues since; after all, they are right next to each other.

• Carbon monoxide from harbor craft increased from • Sustainable Terminals Accelerating Regional 294 tons to 483 and similarly increased from 398 to Transformation Project (START): CARB awarded a 632 tons from cargo handling equipment; 64% and $50 million grant for a transformative demonstration of 59% increases, respectively. a near -zero and zero-emissions supply chain. This includes • Similarly, for harbor craft, hydrocarbons (precursors the ports of Oakland and Stockton and more than 100 for smog/ozone) increased by 5%, from 70 to 73 tons. pieces of zero-emission terminal equipment. At Long Beac h 34 pieces of zero emission cargo handling

Beach. Summary numbers from Port of Los Angeles data re- tugboat, fve electric trucks at an off-dock container vealed that the port has a similar challenge from harbor craft and yar d, and two heavy-duty truck charging outlets.

cargo handlers. That said, new battery powered units and hybrid • Port Advanced Vehicle Electrifcation (PAVE): equipment, not yet in service as this report was fled, will likely P AVE will design, install and deploy electrical www.maritimelogisticsprofessional.com 41