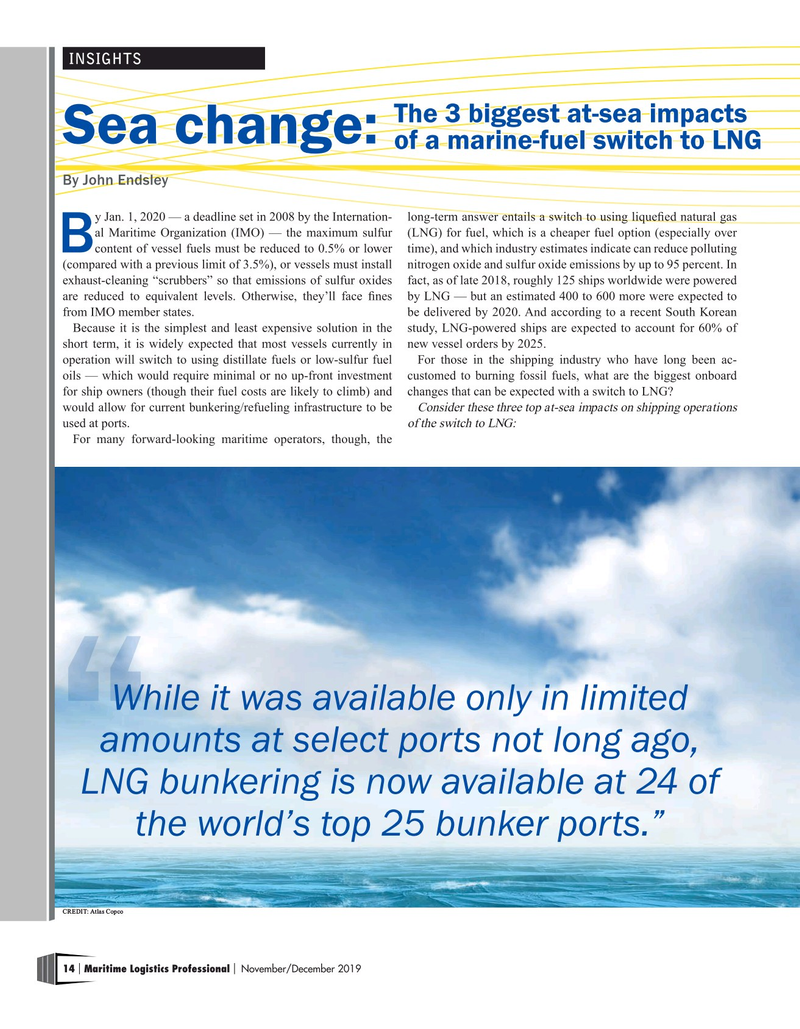 Sea change: of a marine-fuel switch to LNG

By John Endsley y Jan. 1, 2020 — a deadline set in 2008 by the Internation- long-term answer entails a switch to using liquefed natural gas al Maritime Organization (IMO) — the maximum sulfur (LNG) for fuel, which is a cheaper fuel option (especially over

Bcontent of vessel fuels must be reduced to 0.5% or lower time), and which industry estimates indicate can reduce polluting (compared with a previous limit of 3.5%), or vessels must install nitrogen oxide and sulfur oxide emissions by up to 95 percent. In exhaust-cleaning “scrubbers” so that emissions of sulfur oxides fact, as of late 2018, roughly 125 ships worldwide were powered are reduced to equivalent levels. Otherwise, they’ll face fnes by LNG — but an estimated 400 to 600 more were expected to from IMO member states. be delivered by 2020. And according to a recent South Korean

Because it is the simplest and least expensive solution in the study, LNG-powered ships are expected to account for 60% of short term, it is widely expected that most vessels currently in new vessel orders by 2025.

operation will switch to using distillate fuels or low-sulfur fuel For those in the shipping industry who have long been ac- oils — which would require minimal or no up-front investment customed to burning fossil fuels, what are the biggest onboard for ship owners (though their fuel costs are likely to climb) and changes that can be expected with a switch to LNG?

would allow for current bunkering/refueling infrastructure to be Consider these three top at-sea impacts on shipping operations used at ports. of the switch to LNG:

For many forward-looking maritime operators, though, the

While it was available only in limited amounts at select ports not long ago,

LNG bunkering is now available at 24 of the world’s top 25 bunker ports.”