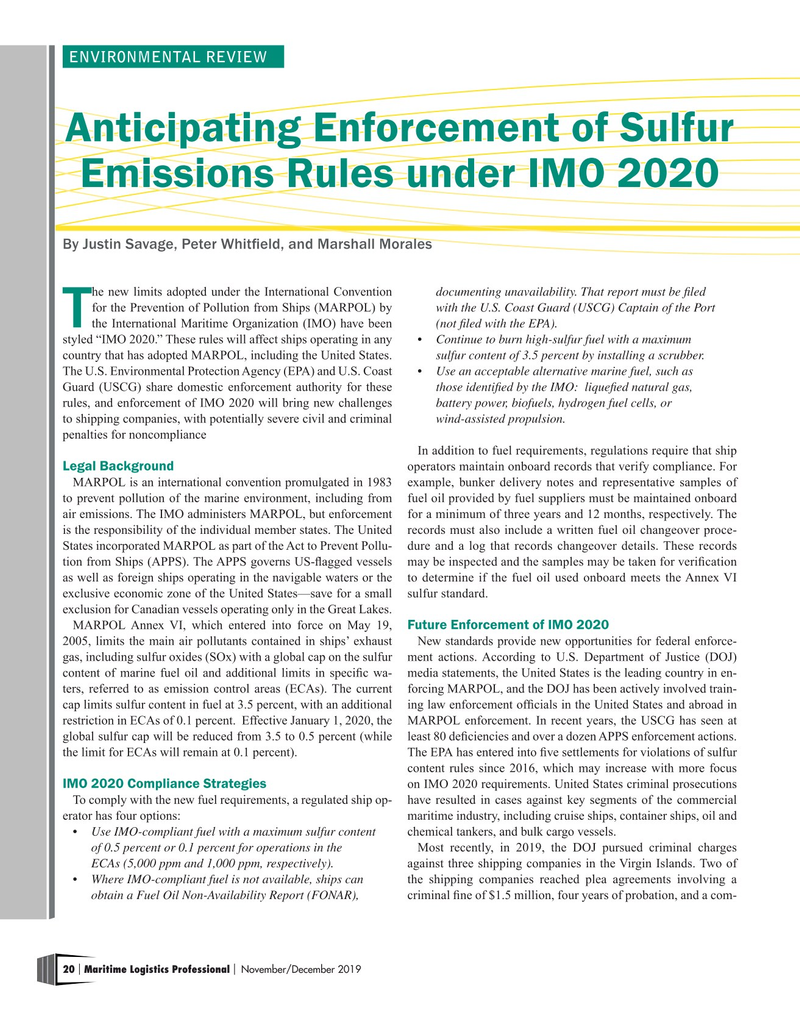 By Justin Savage, Peter Whitfeld, and Marshall Morales he new limits adopted under the International Convention documenting unavailability. That report must be fled for the Prevention of Pollution from Ships (MARPOL) by with the U.S. Coast Guard (USCG) Captain of the Port

Tthe International Maritime Organization (IMO) have been (not fled with the EPA).

styled “IMO 2020.” These rules will affect ships operating in any • Continue to burn high-sulfur fuel with a maximum country that has adopted MARPOL, including the United States. sulfur content of 3.5 percent by installing a scrubber.

The U.S. Environmental Protection Agency (EPA) and U.S. Coast • Use an acceptable alternative marine fuel, such as

In addition to fuel requirements, regulations require that ship

Legal Background operators maintain onboard records that verify compliance. For

MARPOL is an international convention promulgated in 1983 example, bunker delivery notes and representative samples of to prevent pollution of the marine environment, including from fuel oil provided by fuel suppliers must be maintained onboard air emissions. The IMO administers MARPOL, but enforcement for a minimum of three years and 12 months, respectively. The is the responsibility of the individual member states. The United records must also include a written fuel oil changeover proce-

States incorporated MARPOL as part of the Act to Prevent Pollu- dure and a log that records changeover details. These records tion from Ships (APPS). The APPS governs US-fagged vessels may be inspected and the samples may be taken for verifcation as well as foreign ships operating in the navigable waters or the to determine if the fuel oil used onboard meets the Annex VI exclusive economic zone of the United States—save for a small sulfur standard.

exclusion for Canadian vessels operating only in the Great Lakes.

MARPOL Annex VI, which entered into force on May 19,

Future Enforcement of IMO 2020 2005, limits the main air pollutants contained in ships’ exhaust New standards provide new opportunities for federal enforce- gas, including sulfur oxides (SOx) with a global cap on the sulfur ment actions. According to U.S. Department of Justice (DOJ) content of marine fuel oil and additional limits in specifc wa- media statements, the United States is the leading country in en- ters, referred to as emission control areas (ECAs). The current forcing MARPOL, and the DOJ has been actively involved train- cap limits sulfur content in fuel at 3.5 percent, with an additional ing law enforcement offcials in the United States and abroad in restriction in ECAs of 0.1 percent. Effective January 1, 2020, the MARPOL enforcement. In recent years, the USCG has seen at global sulfur cap will be reduced from 3.5 to 0.5 percent (while least 80 defciencies and over a dozen APPS enforcement actions. the limit for ECAs will remain at 0.1 percent). The EPA has entered into fve settlements for violations of sulfur content rules since 2016, which may increase with more focus

To comply with the new fuel requirements, a regulated ship op- have resulted in cases against key segments of the commercial erator has four options: maritime industry, including cruise ships, container ships, oil and • Use IMO-compliant fuel with a maximum sulfur content chemical tankers, and bulk cargo vessels. of 0.5 percent or 0.1 percent for operations in the Most recently, in 2019, the DOJ pursued criminal charges ECAs (5,000 ppm and 1,000 ppm, respectively). against three shipping companies in the Virgin Islands. Two of • Where IMO-compliant fuel is not available, ships can the shipping companies reached plea agreements involving a obtain a Fuel Oil Non-Availability Report (FONAR), criminal fne of $1.5 million, four years of probation, and a com- 20 Maritime Logistics Professional November/December 2019 | |