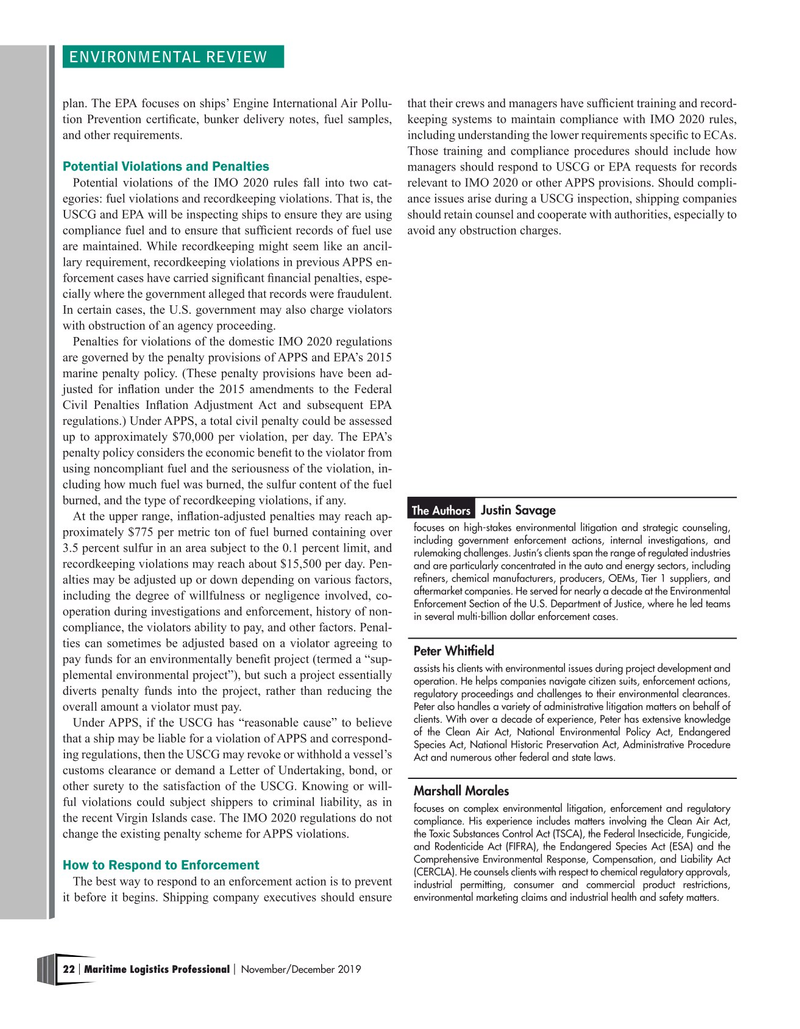 Those training and compliance procedures should include how

Potential violations of the IMO 2020 rules fall into two cat- relevant to IMO 2020 or other APPS provisions. Should compli- egories: fuel violations and recordkeeping violations. That is, the ance issues arise during a USCG inspection, shipping companies

USCG and EPA will be inspecting ships to ensure they are using should retain counsel and cooperate with authorities, especially to compliance fuel and to ensure that suffcient records of fuel use avoid any obstruction charges.

are maintained. While recordkeeping might seem like an ancil- lary requirement, recordkeeping violations in previous APPS en- forcement cases have carried signifcant fnancial penalties, espe- cially where the government alleged that records were fraudulent.

In certain cases, the U.S. government may also charge violators with obstruction of an agency proceeding.

Civil Penalties Infation Adjustment Act and subsequent EPA regulations.) Under APPS, a total civil penalty could be assessed up to approximately $70,000 per violation, per day. The EPA’s penalty policy considers the economic beneft to the violator from using noncompliant fuel and the seriousness of the violation, in- cluding how much fuel was burned, the sulfur content of the fuel burned, and the type of recordkeeping violations, if any.

At the upper range, infation-adjusted penalties may reach ap- focuses on high-stakes environmental litigation and strategic counseling, proximately $775 per metric ton of fuel burned containing over including government enforcement actions, internal investigations, and 3.5 percent sulfur in an area subject to the 0.1 percent limit, and rulemaking challenges. Justin’s clients span the range of regulated industries recordkeeping violations may reach about $15,500 per day. Pen- and are particularly concentrated in the auto and energy sectors, including refners, chemical manufacturers, producers, OEMs, Tier 1 suppliers, and alties may be adjusted up or down depending on various factors, aftermarket companies. He served for nearly a decade at the Environmental including the degree of willfulness or negligence involved, co-

Enforcement Section of the U.S. Department of Justice, where he led teams operation during investigations and enforcement, history of non- in several multi-billion dollar enforcement cases. compliance, the violators ability to pay, and other factors. Penal- ties can sometimes be adjusted based on a violator agreeing to

Peter Whitfeld pay funds for an environmentally beneft project (termed a “sup- assists his clients with environmental issues during project development and plemental environmental project”), but such a project essentially operation. He helps companies navigate citizen suits, enforcement actions, diverts penalty funds into the project, rather than reducing the regulatory proceedings and challenges to their environmental clearances.

Peter also handles a variety of administrative litigation matters on behalf of overall amount a violator must pay.

clients. With over a decade of experience, Peter has extensive knowledge

Under APPS, if the USCG has “reasonable cause” to believe of the Clean Air Act, National Environmental Policy Act, Endangered that a ship may be liable for a violation of APPS and correspond-

Act and numerous other federal and state laws.

customs clearance or demand a Letter of Undertaking, bond, or other surety to the satisfaction of the USCG. Knowing or will-

and Rodenticide Act (FIFRA), the Endangered Species Act (ESA) and the

How to Respond to Enforcement (CERCLA). He counsels clients with respect to chemical regulatory approvals,

The best way to respond to an enforcement action is to prevent industrial permitting, consumer and commercial product restrictions, environmental marketing claims and industrial health and safety matters.

it before it begins. Shipping company executives should ensure 22 Maritime Logistics Professional November/December 2019 | |