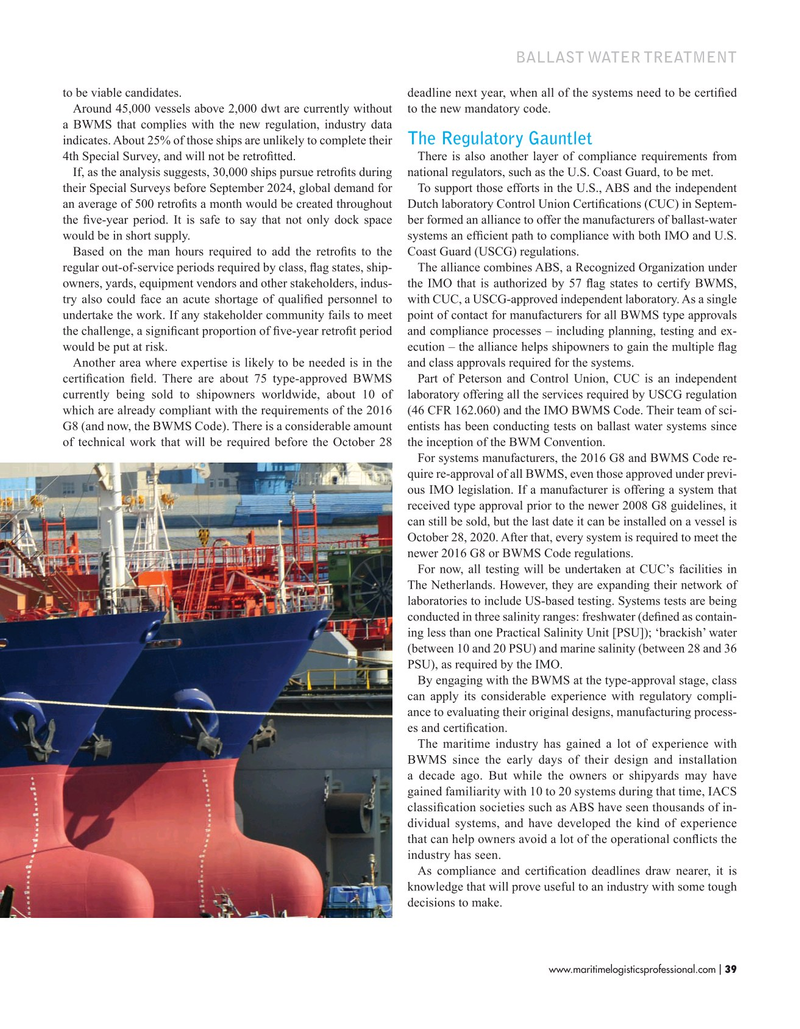 BALLAST WATER TREATMENT to be viable candidates. deadline next year, when all of the systems need to be certifed

Around 45,000 vessels above 2,000 dwt are currently without to the new mandatory code.

a BWMS that complies with the new regulation, industry data indicates. About 25% of those ships are unlikely to complete their The Regulatory Gauntlet 4th Special Survey, and will not be retroftted. There is also another layer of compliance requirements from

If, as the analysis suggests, 30,000 ships pursue retrofts during national regulators, such as the U.S. Coast Guard, to be met. their Special Surveys before September 2024, global demand for To support those efforts in the U.S., ABS and the independent an average of 500 retrofts a month would be created throughout Dutch laboratory Control Union Certifcations (CUC) in Septem- the fve-year period. It is safe to say that not only dock space ber formed an alliance to offer the manufacturers of ballast-water would be in short supply. systems an effcient path to compliance with both IMO and U.S.

Based on the man hours required to add the retrofts to the Coast Guard (USCG) regulations.

regular out-of-service periods required by class, fag states, ship- The alliance combines ABS, a Recognized Organization under owners, yards, equipment vendors and other stakeholders, indus- the IMO that is authorized by 57 fag states to certify BWMS, try also could face an acute shortage of qualifed personnel to with CUC, a USCG-approved independent laboratory. As a single undertake the work. If any stakeholder community fails to meet point of contact for manufacturers for all BWMS type approvals the challenge, a signifcant proportion of fve-year retroft period and compliance processes – including planning, testing and ex- would be put at risk. ecution – the alliance helps shipowners to gain the multiple fag

Another area where expertise is likely to be needed is in the and class approvals required for the systems.

certifcation feld. There are about 75 type-approved BWMS Part of Peterson and Control Union, CUC is an independent currently being sold to shipowners worldwide, about 10 of laboratory offering all the services required by USCG regulation which are already compliant with the requirements of the 2016 (46 CFR 162.060) and the IMO BWMS Code. Their team of sci-

G8 (and now, the BWMS Code). There is a considerable amount entists has been conducting tests on ballast water systems since of technical work that will be required before the October 28 the inception of the BWM Convention.

For systems manufacturers, the 2016 G8 and BWMS Code re- quire re-approval of all BWMS, even those approved under previ- ous IMO legislation. If a manufacturer is offering a system that received type approval prior to the newer 2008 G8 guidelines, it can still be sold, but the last date it can be installed on a vessel is

For now, all testing will be undertaken at CUC’s facilities in

The Netherlands. However, they are expanding their network of laboratories to include US-based testing. Systems tests are being conducted in three salinity ranges: freshwater (defned as contain- ing less than one Practical Salinity Unit [PSU]); ‘brackish’ water (between 10 and 20 PSU) and marine salinity (between 28 and 36

PSU), as required by the IMO.

By engaging with the BWMS at the type-approval stage, class can apply its considerable experience with regulatory compli- ance to evaluating their original designs, manufacturing process- es and certifcation.

The maritime industry has gained a lot of experience with

BWMS since the early days of their design and installation a decade ago. But while the owners or shipyards may have gained familiarity with 10 to 20 systems during that time, IACS classifcation societies such as ABS have seen thousands of in- dividual systems, and have developed the kind of experience that can help owners avoid a lot of the operational conficts the industry has seen.

As compliance and certifcation deadlines draw nearer, it is knowledge that will prove useful to an industry with some tough decisions to make.