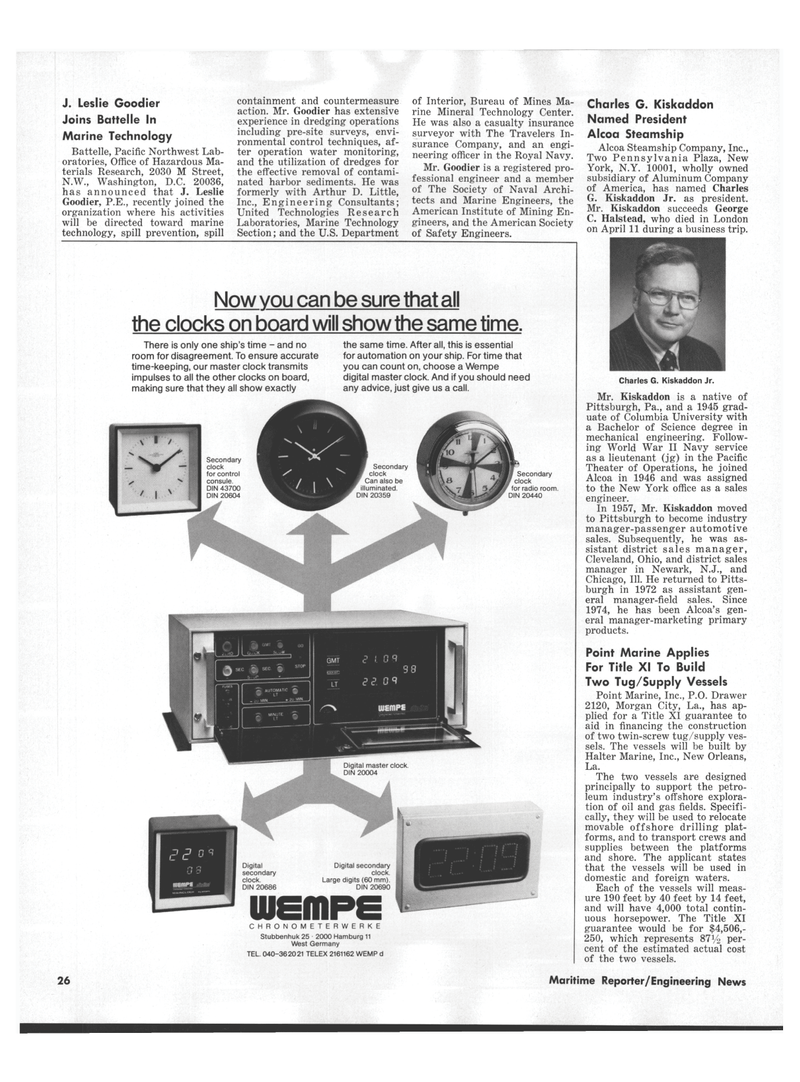 Goodier, P.E., recently joined the organization where his activities will be directed toward marine technology, spill prevention, spill containment and countermeasure action. Mr. Goodier has extensive experience in dredging operations including pre-site surveys, envi- ronmental control techniques, af- ter operation water monitoring, and the utilization of dredges for the effective removal of contami- nated harbor sediments. He was formerly with Arthur D. Little,

He was also a casualty insurance surveyor with The Travelers In- surance Company, and an engi- neering officer in the Royal Navy.

Mr. Goodier is a registered pro- fessional engineer and a member of The Society of Naval Archi- tects and Marine Engineers, the

American Institute of Mining En- gineers, and the American Society of Safety Engineers.

Now vou can be sure that all the clocks on board will show the same time.

There is only one ship's time - and no room for disagreement. To ensure accurate time-keeping, our master clock transmits impulses to all the other clocks on board, making sure that they all show exactly the same time. After all, this is essential for automation on your ship. For time that you can count on, choose a Wempe digital master clock. And if you should need any advice, just give us a call.

C. Halstead, who died in London on April 11 during a business trip.

Mr. Kiskaddon is a native of

Pittsburgh, Pa., and a 1945 grad- uate of Columbia University with a Bachelor of Science degree in mechanical engineering. Follow- ing World War II Navy service as a lieutenant (jg) in the Pacific

Theater of Operations, he joined

Alcoa in 1946 and was assigned to the New York office as a sales engineer.

In 1957, Mr. Kiskaddon moved to Pittsburgh to become industry manager-passenger automotive sales. Subsequently, he was as- sistant district sales manager,

Cleveland, Ohio, and district sales manager in Newark, N.J., and

For Title XI To Build

Point Marine, Inc., P.O. Drawer 2120, Morgan City, La., has ap- plied for a Title XI guarantee to aid in financing the construction of two twin-screw tug/supply ves- sels. The vessels will be built by

The two vessels are designed principally to support the petro- leum industry's offshore explora- tion of oil and gas fields. Specifi- cally, they will be used to relocate movable offshore drilling plat- forms, and to transport crews and supplies between the platforms and shore. The applicant states that the vessels will be used in domestic and foreign waters.

Each of the vessels will meas- ure 190 feet by 40 feet by 14 feet, and will have 4,000 total contin- uous horsepower. The Title XI guarantee would be for $4,506,- 250, which represents 87y2 per- cent of the estimated actual cost of the two vessels. 26 Maritime Reporter/Engineering News