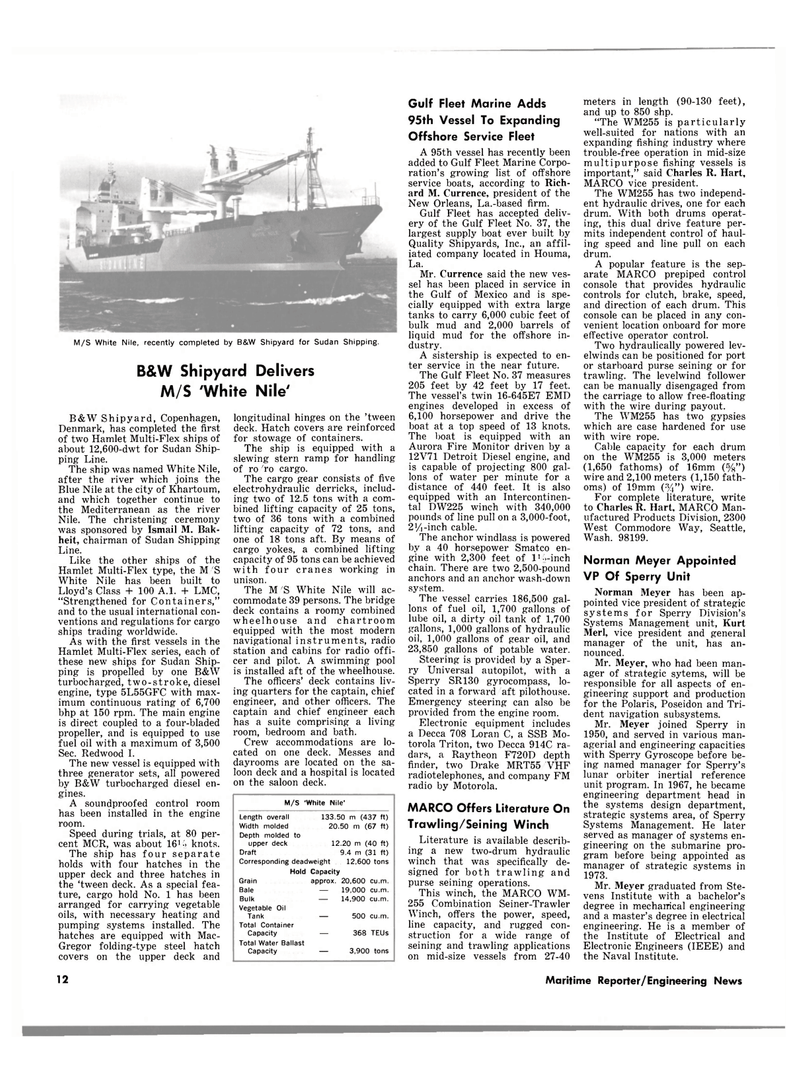 Denmark, has completed the first of two Hamlet Multi-Flex ships of about 12,600-dwt for Sudan Ship- ping Line.

The ship was named White Nile, after the river which joins the

Blue Nile at the city of Khartoum, and which together continue to the Mediterranean as the river

White Nile has been built to

As with the first vessels in the

Hamlet Multi-Flex series, each of these new ships for Sudan Ship- ping is propelled by one B&W turbocharged, two-stroke, diesel engine, type 5L55GFC with max- imum continuous rating of 6,700 bhp at 150 rpm. The main engine is direct coupled to a four-bladed propeller, and is equipped to use fuel oil with a maximum of 3,500

A soundproofed control room has been installed in the engine room.

The ship has four separate holds with four hatches in the upper deck and three hatches in the 'tween deck. As a special fea- ture, cargo hold No. 1 has been arranged for carrying vegetable oils, with necessary heating and pumping systems installed. The hatches are equipped with Mac-

Gregor folding-type steel hatch covers on the upper deck and longitudinal hinges on the 'tween deck. Hatch covers are reinforced for stowage of containers.

The ship is equipped with a slewing stern ramp for handling of ro/ro cargo.

The M 7S White Nile will ac- commodate 39 persons. The bridge deck contains a roomy combined wheelhouse and chartroom equipped with the most modern navigational instruments, radio station and cabins for radio offi- cer and pilot. A swimming pool is installed aft of the wheelhouse.

The officers' deck contains liv- ing quarters for the captain, chief engineer, and other officers. The captain and chief engineer each has a suite comprising a living room, bedroom and bath.

A 95th vessel has recently been added to Gulf Fleet Marine Corpo- ration's growing list of offshore service boats, according to Rich- ard M. Currence, president of the

Gulf Fleet has accepted deliv- ery of the Gulf Fleet No. 37, the largest supply boat ever built by

Mr. Currence said the new ves- sel has been placed in service in the Gulf of Mexico and is spe- cially equipped with extra large tanks to carry 6,000 cubic feet of bulk mud and 2,000 barrels of liquid mud for the offshore in- dustry.

A sistership is expected to en- ter service in the near future.

The boat is equipped with an

The anchor windlass is powered by a 40 horsepower Smatco en- gine with 2,300 feet of lU-inch chain. There are two 2,500-pound anchors and an anchor wash-down system.

Steering is provided by a Sper- ry Universal autopilot, with a

Emergency steering can also be provided from the engine room.

Literature is available describ- ing a new two-drum hydraulic winch that was specifically de- signed for both trawling and purse seining operations.

Winch, offers the power, speed, line capacity, and rugged con- struction for a wide range of seining and trawling applications on mid-size vessels from 27-40 meters in length (90-130 feet), and up to 850 shp. "The WM255 is particularly well-suited for nations with an expanding fishing industry where trouble-free operation in mid-size multipurpose fishing vessels is important," said Charles R. Hart,

The WM255 has two independ- ent hydraulic drives, one for each drum. With both drums operat- ing, this dual drive feature per- mits independent control of haul- ing speed and line pull on each drum.

A popular feature is the sep- arate MARCO prepiped control console that provides hydraulic controls for clutch, brake, speed, and direction of each drum. This console can be placed in any con- venient location onboard for more effective operator control.

Two hydraulically powered lev- elwinds can be positioned for port or starboard purse seining or for trawling. The levelwind follower can be manually disengaged from the carriage to allow free-floating with the wire during payout.

The WM255 has two gypsies which are case hardened for use with wire rope.

Merl, vice president and general manager of the unit, has an- nounced.

Mr. Meyer, who had been man- ager of strategic sytems, will be responsible for all aspects of en- gineering support and production for the Polaris, Poseidon and Tri- dent navigation subsystems.