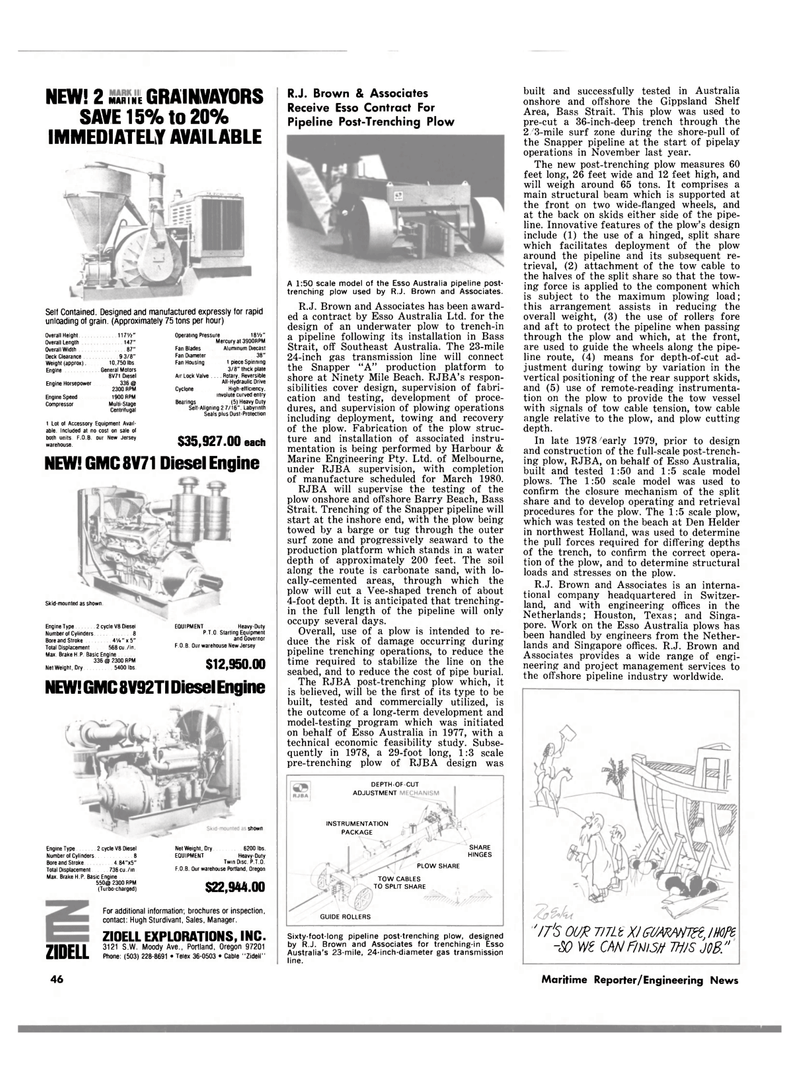 Area, Bass Strait. This plow was used to pre-cut a 36-inch-deep trench through the 2 3-mile surf zone during the shore-pull of the Snapper pipeline at the start of pipelay operations in November last year.

The new post-trenching plow measures 60 feet long, 26 feet wide and 12 feet high, and will weigh around 65 tons. It comprises a main structural beam which is supported at the front on two wide-flanged wheels, and at the back on skids either side of the pipe- line. Innovative features of the plow's design include (1) the use of a hinged, split share which facilitates deployment of the plow around the pipeline and its subsequent re- trieval, (2) attachment of the tow cable to the halves of the split share so that the tow- ing force is applied to the component which is subject to the maximum plowing load; this arrangement assists in reducing the overall weight, (3) the use of rollers fore and aft to protect the pipeline when passing through the plow and which, at the front, are used to guide the wheels along the pipe- line route, (4) means for depth-of-cut ad- justment during towing by variation in the vertical positioning of the rear support skids, and (5) use of remote-reading instrumenta- tion on the plow to provide the tow vessel with signals of tow cable tension, tow cable angle relative to the plow, and plow cutting depth.

In late 1978 early 1979, prior to design and construction of the full-scale post-trench- ing plow, RJBA, on behalf of Esso Australia, built and tested 1:50 and 1:5 scale model plows. The 1:50 scale model was used to confirm the closure mechanism of the split share and to develop operating and retrieval procedures for the plow. The 1:5 scale plow, which was tested on the beach at Den Helder in northwest Holland, was used to determine the pull forces required for differing depths of the trench, to confirm the correct opera- tion of the plow, and to determine structural loads and stresses on the plow.

R.J. Brown and Associates is an interna- tional company headquartered in Switzer- land, and with engineering offices in the

Netherlands; Houston, Texas; and Singa- pore. Work on the Esso Australia plows has been handled by engineers from the Nether- lands and Singapore offices. R.J. Brown and

Self Contained. Designed and manufactured expressly for rapid unloading of grain. (Approximately 75 tons per hour)

Centrifugal 1 Lot of Accessory Equipment Avail- able. Included at no cost on sale of both units. F O B. our New Jersey warehouse.

R.J. Brown and Associates has been award- ed a contract by Esso Australia Ltd. for the design of an underwater plow to trench-in a pipeline following its installation in Bass

Strait, off Southeast Australia. The 23-mile 24-inch gas transmission line will connect the Snapper "A" production platform to shore at Ninety Mile Beach. RJBA's respon- sibilities cover design, supervision of fabri- cation and testing, development of proce- dures, and supervision of plowing operations including deployment, towing and recovery of the plow. Fabrication of the plow struc- ture and installation of associated instru- mentation is being performed by Harbour &

Marine Engineering Pty. Ltd. of Melbourne, under RJBA supervision, with completion of manufacture scheduled for March 1980.

RJBA will supervise the testing of the plow onshore and offshore Barry Beach, Bass

Strait. Trenching of the Snapper pipeline will start at the inshore end, with the plow being towed by a barge or tug through the outer surf zone and progressively seaward to the production platform which stands in a water depth of approximately 200 feet. The soil along the route is carbonate sand, with lo- cally-cemented areas, through which the plow will cut a Vee-shaped trench of about 4-foot depth. It is anticipated that trenching- in the full length of the pipeline will only occupy several days.

Overall, use of a plow is intended to re- duce the risk of damage occurring during pipeline trenching operations, to reduce the time required to stabilize the line on the seabed, and to reduce the cost of pipe burial.

The RJBA post-trenching plow which, it is believed, will be the first of its type to be built, tested and commercially utilized, is the outcome of a long-term development and model-testing program which was initiated on behalf of Esso Australia in 1977, with a technical economic feasibility study. Subse- quently in 1978, a 29-foot long, 1:3 scale pre-trenching plow of RJBA design was