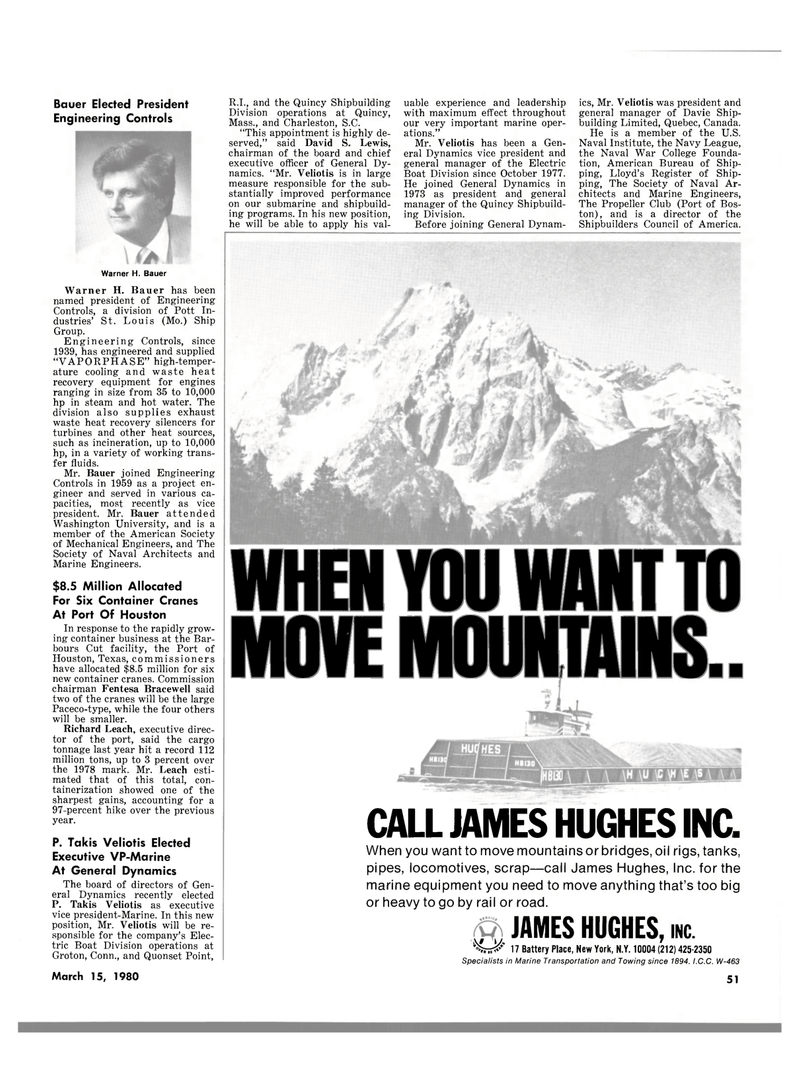 Warner H. Bauer has been named president of Engineering

Engineering Controls, since 1939, has engineered and supplied "VAPORPHASE" high-temper- ature cooling and waste heat recovery equipment for engines ranging in size from 35 to 10,000 hp in steam and hot water. The division also supplies exhaust waste heat recovery silencers for turbines and other heat sources, such as incineration, up to 10,000 hp, in a variety of working trans- fer fluids.

Controls in 1959 as a project en- gineer and served in various ca- pacities, most recently as vice president. Mr. Bauer attended

Washington University, and is a member of the American Society of Mechanical Engineers, and The

Society of Naval Architects and

At Port Of Houston

In response to the rapidly grow- ing container business at the Bar- bours Cut facility, the Port of

Paceco-type, while the four others will be smaller.

Richard Leach, executive direc- tor of the port, said the cargo tonnage last year hit a record 112 million tons, up to 3 percent over the 1978 mark. Mr. Leach esti- mated that of this total, con- tainerization showed one of the sharpest gains, accounting for a 97-percent hike over the previous year.

The board of directors of Gen- eral Dynamics recently elected

P. Takis Veliotis as executive vice president-Marine. In this new position, Mr. Veliotis will be re- sponsible for the company's Elec- tric Boat Division operations at

R.I., and the Quincy Shipbuilding

Mass., and Charleston, S.C. "This appointment is highly de- served," said David S. Lewis, chairman of the board and chief executive officer of General Dy- namics. "Mr. Veliotis is in large measure responsible for the sub- stantially improved performance on our submarine and shipbuild- ing programs. In his new position, he will be able to apply his val- uable experience and leadership with maximum effect throughout our very important marine oper- ations."

Mr. Veliotis has been a Gen- eral Dynamics vice president and general manager of the Electric

He joined General Dynamics in 1973 as president and general manager of the Quincy Shipbuild- ing Division.

The Propeller Club (Port of Bos- ton), and is a director of the

WHEN YOU WANT TO MOVE MOUNTAINS..

When you want to move mountains or bridges, oil rigs, tanks, pipes, locomotives, scrap—call James Hughes, Inc. for the marine equipment you need to move anything that's too big or heavy to go by rail or road.