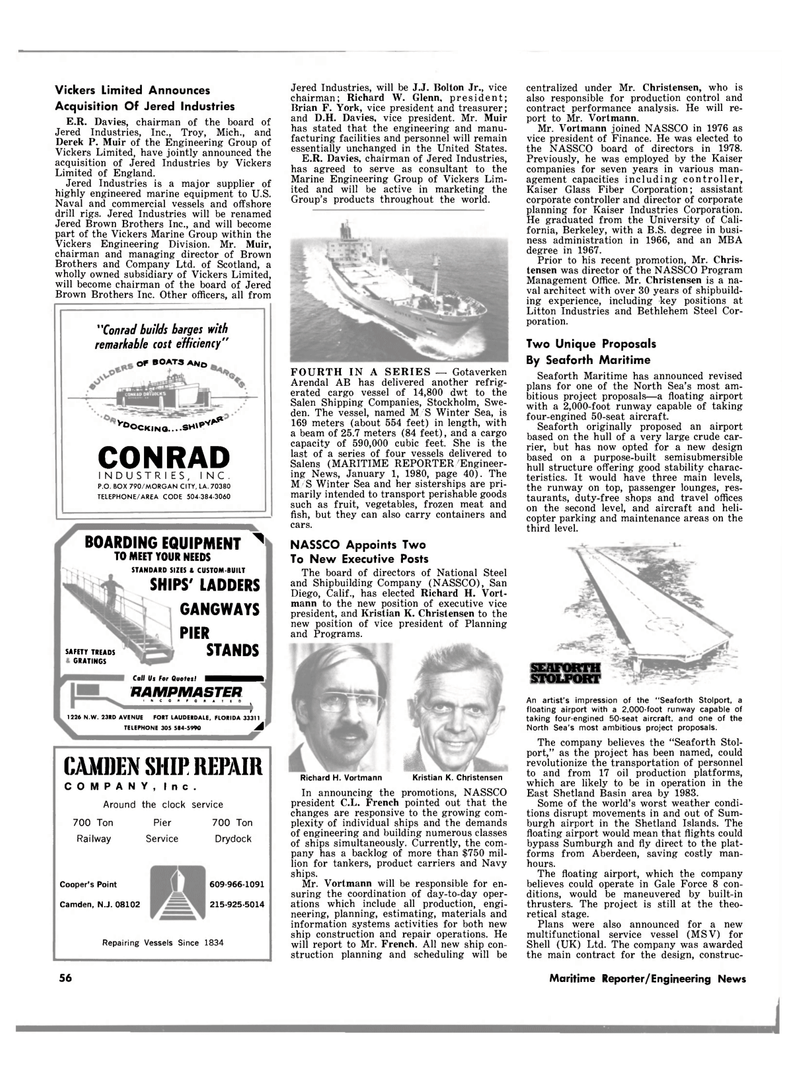 E.R. Davies, chairman of the board of

Derek P. Muir of the Engineering Group of

Vickers Limited, have jointly announced the acquisition of Jered Industries by Vickers

Jered Industries is a major supplier of highly engineered marine equipment to U.S.

Naval and commercial vessels and offshore drill rigs. Jered Industries will be renamed

Jered Brown Brothers Inc., and will become part of the Vickers Marine Group within the

Brothers and Company Ltd. of Scotland, a wholly owned subsidiary of Vickers Limited, will become chairman of the board of Jered

Brian F. York, vice president and treasurer; and D.H. Davies, vice president. Mr. Muir has stated that the engineering and manu- facturing facilities and personnel will remain essentially unchanged in the United States.

E.R. Davies, chairman of Jered Industries, has agreed to serve as consultant to the

Group's products throughout the world.

FOURTH IN A SERIES — Gotaverken

Arendal AB has delivered another refrig- erated cargo vessel of 14,800 dwt to the

M./S Winter Sea and her sisterships are pri- marily intended to transport perishable goods such as fruit, vegetables, frozen meat and fish, but they can also carry containers and cars.

The board of directors of National Steel and Shipbuilding Company (NASSCO), San

In announcing the promotions, NASSCO president C.L. French pointed out that the changes are responsive to the growing com- plexity of individual ships and the demands of engineering and building numerous classes of ships simultaneously. Currently, the com- pany has a backlog of more than $750 mil- lion for tankers, product carriers and Navy ships.

Mr. Vortmann will be responsible for en- suring the coordination of day-to-day oper- ations which include all production, engi- neering, planning, estimating, materials and information systems activities for both new ship construction and repair operations. He will report to Mr. French. All new ship con- struction planning and scheduling will be centralized under Mr. Christensen, who is also responsible for production control and contract performance analysis. He will re- port to Mr. Vortmann.

Mr. Vortmann joined NASSCO in 1976 as vice president of Finance. He was elected to the NASSCO board of directors in 1978.

Previously, he was employed by the Kaiser companies for seven years in various man- agement capacities including controller,

He graduated from the University of Cali- fornia, Berkeley, with a B.S. degree in busi- ness administration in 1966, and an MBA degree in 1967.

Prior to his recent promotion, Mr. Chris- tensen was director of the NASSCO Program

Management Office. Mr. Christensen is a na- val architect with over 30 years of shipbuild- ing experience, including key positions at

Seaforth Maritime has announced revised plans for one of the North Sea's most am- bitious project proposals—a floating airport with a 2,000-foot runway capable of taking four-engined 50-seat aircraft.

Seaforth originally proposed an airport based on the hull of a very large crude car- rier, but has now opted for a new design based on a purpose-built semisubmersible hull structure offering good stability charac- teristics. It would have three main levels, the runway on top, passenger lounges, res- taurants, duty-free shops and travel offices on the second level, and aircraft and heli- copter parking and maintenance areas on the third level.

An artist's impression of the "Seaforth Stolport, a floating airport with a 2,000-foot runway capable of taking four-engined 50-seat aircraft, and one of the

The company believes the "Seaforth Stol- port," as the project has been named, could revolutionize the transportation of personnel to and from 17 oil production platforms, which are likely to be in operation in the

Some of the world's worst weather condi- tions disrupt movements in and out of Sum- burgh airport in the Shetland Islands. The floating airport would mean that flights could bypass Sumburgh and fly direct to the plat- forms from Aberdeen, saving costly man- hours.

The floating airport, which the company believes could operate in Gale Force 8 con- ditions, would be maneuvered by built-in thrusters. The project is still at the theo- retical stage.

Shell (UK) Ltd. The company was awarded the main contract for the design, construc-

TO MEET YOUR NEEDS

Call Us for Quotes! i^H^HHHM