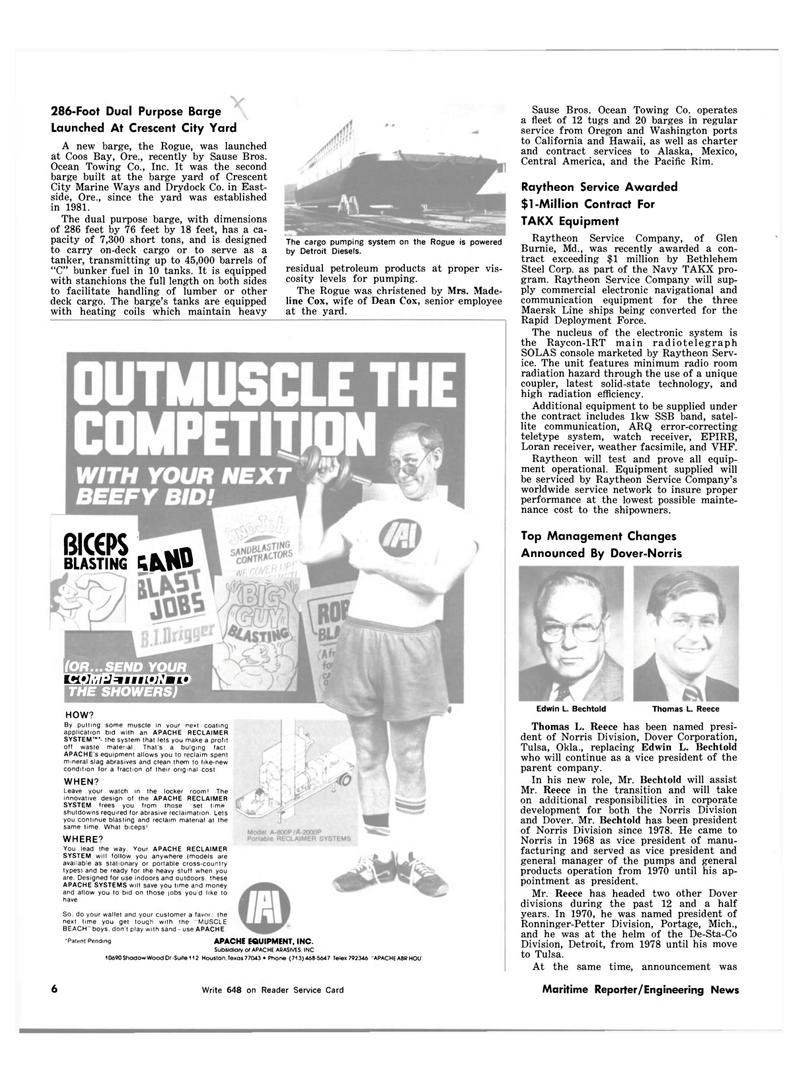 A new barge, the Rogue, was launched at Coos Bay, Ore., recently by Sause Bros.

Ocean Towing Co., Inc. It was the second barge built at the barge yard of Crescent

City Marine Ways and Drydock Co. in East- side, Ore., since the yard was established in 1981.

The dual purpose barge, with dimensions of 286 feet by 76 feet by 18 feet, has a ca- pacity of 7,300 short tons, and is designed to carry on-deck cargo or to serve as a tanker, transmitting up to 45,000 barrels of "C" bunker fuel in 10 tanks. It is equipped with stanchions the full length on both sides to facilitate handling of lumber or other deck cargo. The barge's tanks are equipped with heating coils which maintain heavy

The cargo pumping system on the Rogue is powered by Detroit Diesels. residual petroleum products at proper vis- cosity levels for pumping.

The Rogue was christened by Mrs. Made- line Cox, wife of Dean Cox, senior employee at the yard.

Leave your watch in the locker room! The innovative design of the APACHE RECLAIMER

You lead the way. Your APACHE RECLAIMER

SYSTEM will follow you anywhere (models are available as stationary or portable cross-country types) and be ready for the heavy stuff when you are. Designed for use indoors and outdoors, these

So, do your wallet and your customer a favor the next time you get tough with the MUSCLE

Sause Bros. Ocean Towing Co. operates a fleet of 12 tugs and 20 barges in regular service from Oregon and Washington ports to California and Hawaii, as well as charter and contract services to Alaska, Mexico,

Central America, and the Pacific Rim.

Maersk Line ships being converted for the

Raytheon will test and prove all equip- ment operational. Equipment supplied will be serviced by Raytheon Service Company's worldwide service network to insure proper performance at the lowest possible mainte- nance cost to the shipowners.

Tulsa, Okla., replacing Edwin L. Bechtold who will continue as a vice president of the parent company.

In his new role, Mr. Bechtold will assist

Mr. Reece in the transition and will take on additional responsibilities in corporate development for both the Norris Division and Dover. Mr. Bechtold has been president of Norris Division since 1978. He came to

Mr. Reece has headed two other Dover divisions during the past 12 and a half years. In 1970, he was named president of

Ronninger-Petter Division, Portage, Mich., and he was at the helm of the De-Sta-Co

Division, Detroit, from 1978 until his move to Tulsa.