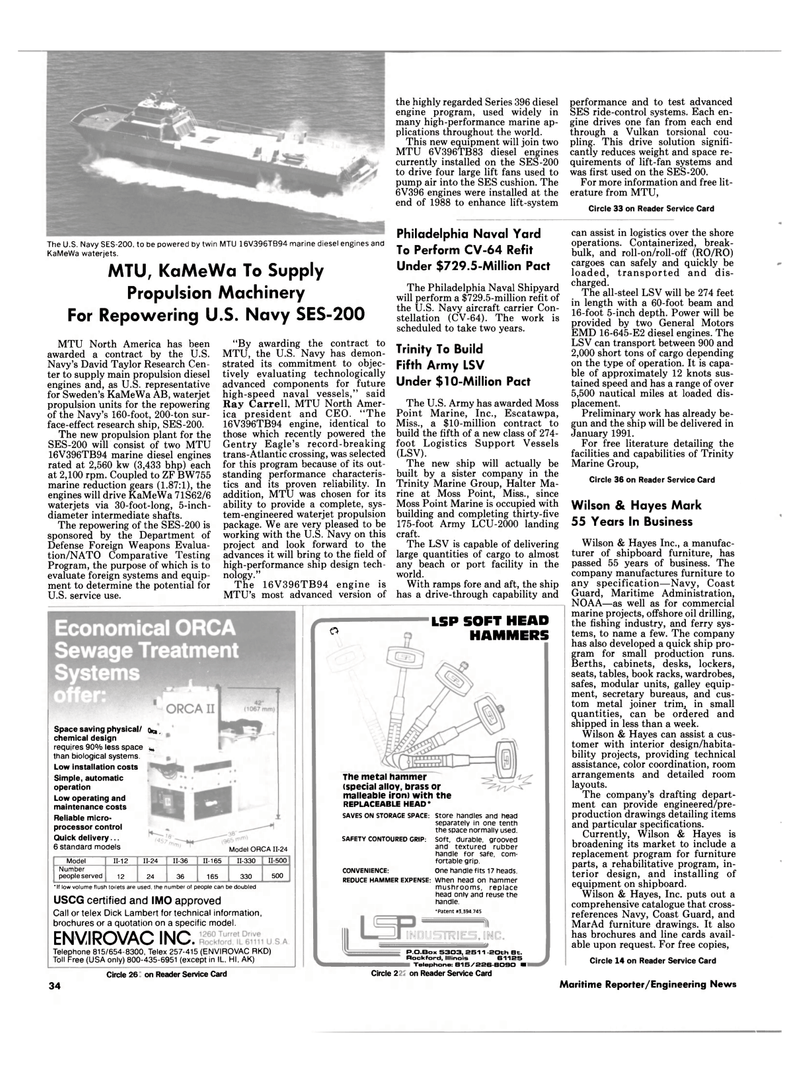 This new equipment will join two

MTU 6V396TB83 diesel engines currently installed on the SES-200 to drive four large lift fans used to pump air into the SES cushion. The 6V396 engines were installed at the end of 1988 to enhance lift-system performance and to test advanced

SES ride-control systems. Each en- gine drives one fan from each end through a Vulkan torsional cou- pling. This drive solution signifi- cantly reduces weight and space re- quirements of lift-fan systems and was first used on the SES-200.

For more information and free lit- erature from MTU,

MTU North America has been awarded a contract by the U.S.

The new propulsion plant for the

Program, the purpose of which is to evaluate foreign systems and equip- ment to determine the potential for

U.S. service use. "By awarding the contract to

Ray Carrell, MTU North Amer- ica president and CEO. "The 16V396TB94 engine, identical to those which recently powered the

Gentry Eagle's record-breaking trans-Atlantic crossing, was selected for this program because of its out- standing performance characteris- tics and its proven reliability. In addition, MTU was chosen for its ability to provide a complete, sys- tem-engineered waterjet propulsion package. We are very pleased to be working with the U.S. Navy on this project and look forward to the advances it will bring to the field of high-performance ship design tech- nology."

MTU's most advanced version of

The Philadelphia Naval Shipyard will perform a $729.5-million refit of the U.S. Navy aircraft carrier Con- stellation (CV-64). The work is scheduled to take two years.

The U.S. Army has awarded Moss

Miss., a $10-million contract to build the fifth of a new class of 274- foot Logistics Support Vessels (LSV).

The LSV is capable of delivering large quantities of cargo to almost any beach or port facility in the world.

With ramps fore and aft, the ship has a drive-through capability and

Call or telex Dick Lambert for technical information, brochures or a quotation on a specific model.

The metal hammer (special alloy, brass or malleable iron) with the REPLACEABLE HEAD*

Store handles and head separately in one tenth the space normally used.

The all-steel LSV will be 274 feet in length with a 60-foot beam and 16-foot 5-inch depth. Power will be provided by two General Motors

LSV can transport between 900 and 2,000 short tons of cargo depending on the type of operation. It is capa- ble of approximately 12 knots sus- tained speed and has a range of over 5,500 nautical miles at loaded dis- placement.

For free literature detailing the facilities and capabilities of Trinity

Wilson & Hayes Inc., a manufac- turer of shipboard furniture, has passed 55 years of business. The company manufactures furniture to any specification—Navy, Coast

Currently, Wilson & Hayes is broadening its market to include a replacement program for furniture parts, a rehabilitative program, in- terior design, and installing of equipment on shipboard.