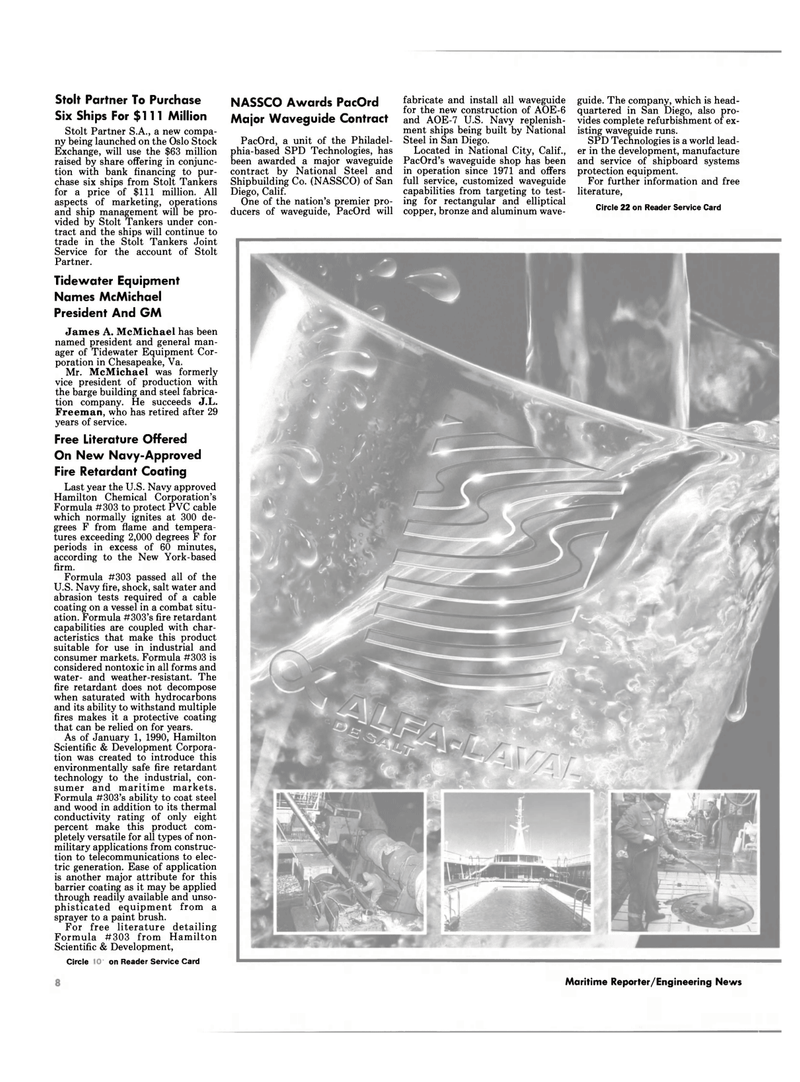 James A. McMichael has been named president and general man- ager of Tidewater Equipment Cor- poration in Chesapeake, Va.

Mr. McMichael was formerly vice president of production with the barge building and steel fabrica- tion company. He succeeds J.L.

Freeman, who has retired after 29 years of service.

Formula #303 to protect PVC cable which normally ignites at 300 de- grees F from flame and tempera- tures exceeding 2,000 degrees F for periods in excess of 60 minutes, according to the New York-based firm.

Formula #303 passed all of the

U.S. Navy fire, shock, salt water and abrasion tests required of a cable coating on a vessel in a combat situ- ation. Formula #303's fire retardant capabilities are coupled with char- acteristics that make this product suitable for use in industrial and consumer markets. Formula #303 is considered nontoxic in all forms and water- and weather-resistant. The fire retardant does not decompose when saturated with hydrocarbons and its ability to withstand multiple fires makes it a protective coating that can be relied on for years.

Formula #303's ability to coat steel and wood in addition to its thermal conductivity rating of only eight percent make this product com- pletely versatile for all types of non- military applications from construc- tion to telecommunications to elec- tric generation. Ease of application is another major attribute for this barrier coating as it may be applied through readily available and unso- phisticated equipment from a sprayer to a paint brush.

Stolt Partner S.A., a new compa- ny being launched on the Oslo Stock

Exchange, will use the $63 million raised by share offering in conjunc- tion with bank financing to pur- chase six ships from Stolt Tankers for a price of $111 million. All aspects of marketing, operations and ship management will be pro- vided by Stolt Tankers under con- tract and the ships will continue to trade in the Stolt Tankers Joint

PacOrd, a unit of the Philadel- phia-based SPD Technologies, has been awarded a major waveguide contract by National Steel and

One of the nation's premier pro- ducers of waveguide, PacOrd will fabricate and install all waveguide for the new construction of AOE-6 and AOE-7 U.S. Navy replenish- ment ships being built by National

PacOrd's waveguide shop has been in operation since 1971 and offers full service, customized waveguide capabilities from targeting to test- ing for rectangular and elliptical copper, bronze and aluminum wave- guide. The company, which is head- quartered in San Diego, also pro- vides complete refurbishment of ex- isting waveguide runs.

SPD Technologies is a world lead- er in the development, manufacture and service of shipboard systems protection equipment.

For further information and free literature,